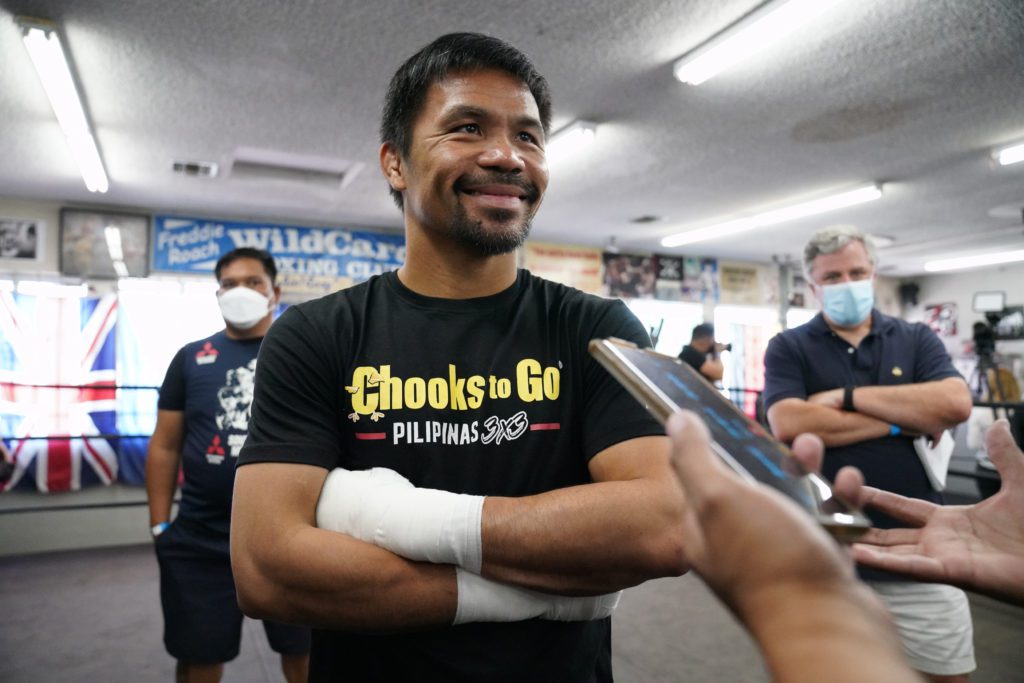 Manny Pacquiao Confirms He Will Run For Philippines President

What had been rumored in and around his last championship fight is now a reality- 42 year old Hall of Fame fighter to be, Manny Pacquiao, is running for President of his home country, the Philippines.

Pacquiao made the announcement Sunday night Philippines time on social media, declaring officially that he is accepting the LBD Laban party’s nomination at their convention earlier in the day,

I boldly accept the challenge of running as PRESIDENT of the Philippines. We need progress. We need to win against poverty. We need government to serve our people with integrity, compassion and transparency. The time is now. I am ready to rise to the challenge of leadership. 🇵🇭 pic.twitter.com/suN1zFTxyW

“I boldly accept the challenge of running as PRESIDENT of the Philippines. We need progress. We need to win against poverty. We need government to serve our people with integrity, compassion and transparency. The time is now. I am ready to rise to the challenge of leadership,” Pacquiao said in the post.

Pacquiao, a current Filipino Senator, had been hinting at the Presidential run before and even, immediately after his 12 round loss to Yordenis Ugas for the WBA Welterweight title in Las Vegas back in August.

As we wrote that night, Ugas was patient using his reach and his long jab followed by right hands to frustrate and tag Pacquiao, who was coming off a 2 year layoff, early and throughout the fight.

The certain future Hall of Famer Pacquiao showed hand speed, but not accuracy. He also got hit much more that night against Ugas than in previous bouts recently in his late career, against Keith Thurman and Adrien Broner in 2019.

The one thing that kept occurring in watching what Ugas did successfully that night is: that a younger, more talented, hard punching Welterweight “king” like a Terence Crawford or Errol Spence would have torn Pacquiao apart, quicker on that August Saturday night.

So, now we wonder if that’s the last time we will see the legendary Pacquiao in the ring?

Pacquiao is being championed to help restore some stability to the Philippines, which has been ravaged by Covid 19 and economic corruption. The current President, Rodrigo Duterte, cannot seek re-election as his six year term is ending.

It’s is possible that with the election coming in May of next year, that Pacquiao could squeeze in one more bout early in 2022, if he wanted. Would that be a rematch with Ugas? Would he perhaps try to fight Errol Spence, who had to withdraw from their bout with a detached retina and left eye surgery?

Or, is it the end of a career that saw him defeat the likes of Marco Antonio Barerra, Erik Morrales, Oscar De La Hoya and Miguel Cotto?