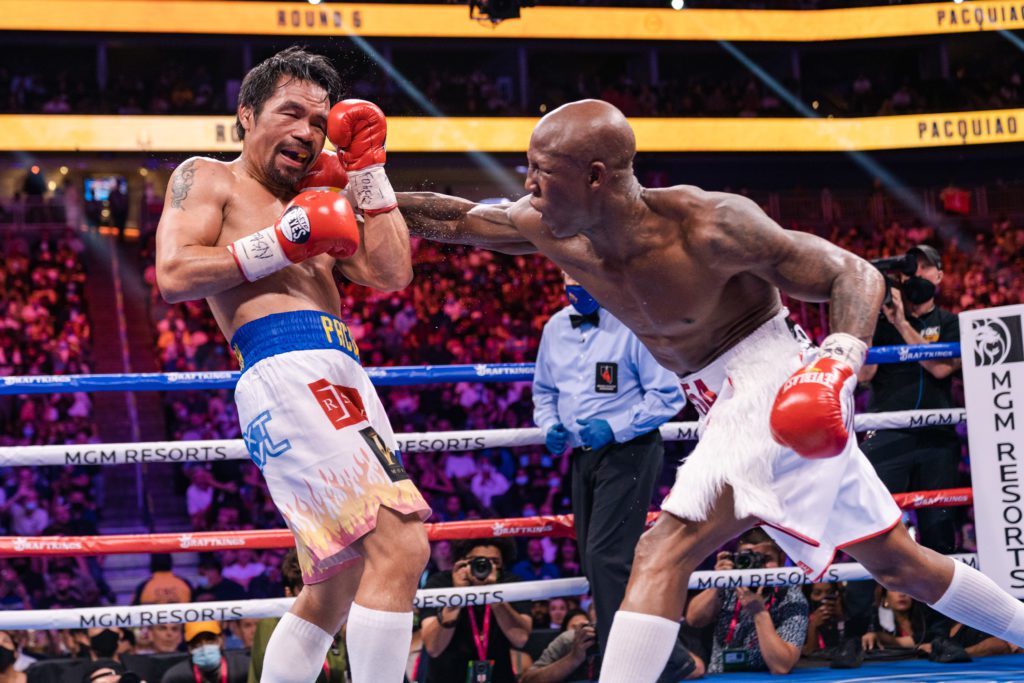 It happens to all the great fighters, eventually, and Saturday night in Las Vegas eight division world champ Manny Pacquiao became the latest. Sooner or later, you step in the ring and due to your advanced age, diminishing or worn skills and more importantly, the stronger/younger foe, it’s obvious that you aren’t going to be the great fighter you once were.

Yes, Saturday was that night and it happened that off a two year layoff, and at almost 43 years of age “Pac-man” joined the likes of Oscar De La Hoya, Julio Caesar Chavez, Sugar Ray Leonard and on and on, in recent boxing history.

Hall of Fame fighters, all.

And, all got caught up to by “Father Time.” Oh, and by a younger opponent- in this case at the T-Mobile Arena on the Vegas strip, Cuban-born Yordenis Ugas undid Pacquiao over 12 rounds.

Saturday was a lot like what a 30 year Pacquiao did to a 35 year old De La Hoya in December of 2008. That night, it was obvious that Oscar no longer had the reflexes or stamina to hang with the Filipino legend. He was battered, beaten and stopped after the eighth round.

This was preceded by De La Hoya essentially retiring the great Chavez a decade earlier.

After “The Golden Boy’s” first victory at 25 years old in dominating fashion over Chavez in June of 1996, he validated it two years later. That’s when the younger (27 vs. 36 years old) De La Hoya was quicker, harder punching and cut Chavez ,badly. The great Mexican champion was forced to quit on his stool, again. And, Chavez was never to be great, again, on the biggest stage, either.

Sugar Ray Leonard is regarded as the greatest of the Welterweights to Middleweights of the last 50 years. But even after thrilling wins over Roberto Duran in the 1980 “no mas” rematch, then handing Thomas “Hit Man” Hearns his first pro defeat a year later and finally, the upset of the menacing Middleweight champ Marvin Hagler in 1987 , “Father Time” came for Sugar Ray, too.

It was a 35 year old Leonard, who didn’t have legs, or the speed to cope with Terry Norris in February of 1991. Norris hit Leonard repeatedly and he could not fire back like the Sugar Ray of old. Eventually, a calf injury slowed Leonard even more and Norris dominated him in a lopsided decision loss.

Leonard was back in March of 1997 at nearly 41 (similar to Pacquiao Saturday night), but he was shell of the “Great Sugar Ray.” That night Hector “Macho” Camacho was younger (35 years old), but more importantly, (and continuing our theme) much quicker and with faster hands. Leonard was no match, was obviously done and stopped by Camacho midway through his final fight.

So, now, back briefly to what Ugas did, or what Pacquiao could not do in their PPV clash.

Ugas was patient. Ugas used his reach and his long jab followed by right hands to frustrate and tag Pacquiao early and throughout the fight.

The certain future Hall of Famer Pacquiao showed hand speed, but not accuracy. He also got hit much more Saturday night against Ugas than in previous bouts recently in his late career, like his Keith Thurman and Adrien Broner wins in 2019.

The one thing that kept occurring in watching what Ugas did successfully last night is: that a younger, more talented, hard punching Welterweight “king” like a Terence Crawford or Errol Spence would have torn Pacquiao apart, quicker Saturday night.

Alas, it wasn’t them, and we shouldn’t discredit what the Cuban did in getting the win of his career.

Yes, he had lost seven times before headed to Saturday night, but the “Pac Man” will be 43 later this  year. It ridiculous to think he will be better or faster/more effective in a subsequent fight.

He might take a “farewell fight” against a lesser fighter to try to end his career with a victory. Legends are often sentimental that way.

Then, again, like De La Hoya, Chavez and Leonard, he may be done.

Not because we don’t want him to still be great, but because Pacquiao simply cannot be anymore.