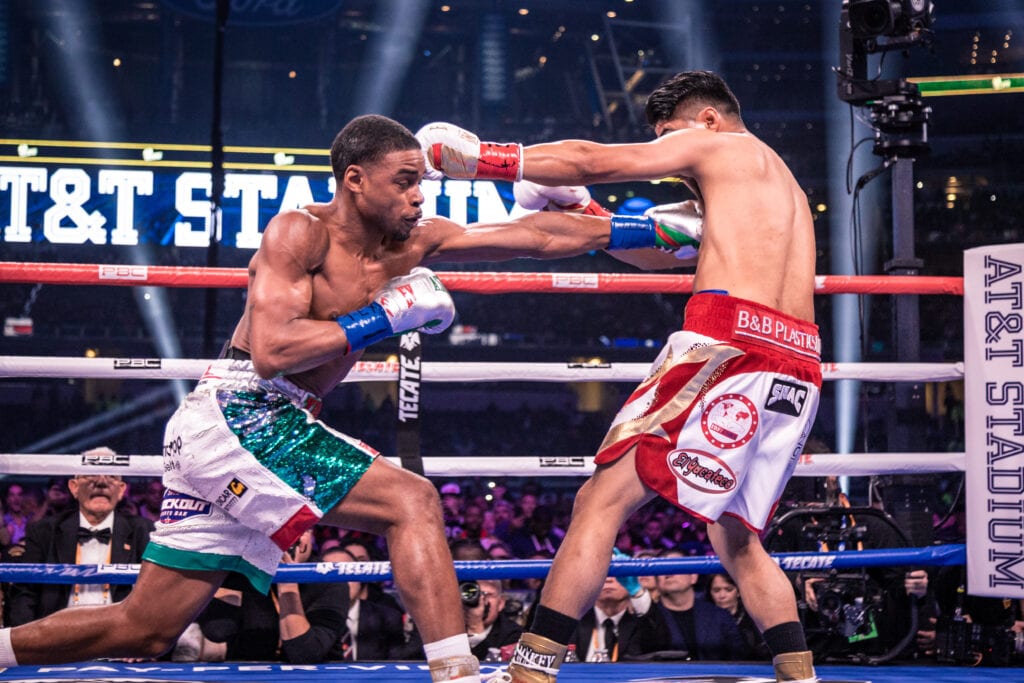 Spence-Porter set to battle in September

Tickets for the event go on sale Monday, July 22 at 12 p.m. PT and can be purchased at AXS.com

“Errol Spence Jr. versus Shawn Porter in a welterweight unification match brings to mind some of the great 147-pound clashes of the past – Sugar Ray Robinson vs. Kid Gavilan, Leonard vs. Hearns or Whitaker vs. Chavez,” said Tom Brown, President of TGB Promotions in a press release. “Both men are in their primes and both like to apply pressure. With that clash of styles, something has to give. In the co-feature, Anthony Dirrell doesn’t want to give up the title and David Benavidez wants it back. Played out before an electric crowd at STAPLES Center in Los Angeles and headlining a PBC on FOX Sports Pay-Per-View, this show has instant classic written all over it.”

Spence vs. Porter represents a major step forward in the quest to find the best 147-pound boxer on the planet. Spence has declared that anyone who wants to make that claim will have to come through him. Porter has already faced some of the biggest names in the division, including Keith Thurman and Danny Garcia, and will make Spence back up his boast.

The unbeaten Spence (25-0, 21 KOs) is a young, powerful welterweight who vaulted to the top of the welterweight scene with a punishing 11th round knockout victory over Kell Brook for the IBF championship in front of Brook’s hometown fans in Sheffield, England in 2017. Fighting out of Desoto, Texas, Spence has successfully defended the title three times. Most recently he scored a unanimous decision victory over three-division world champion Mikey Garcia in a PBC on FOX Pay-Per-View show before a hometown crowd at AT&T Stadium in Arlington, Texas on March 16.

“It’s going to be a very exciting fight,” said Spence to the media. “Shawn is never in a boring fight and I always entertain. It will be a ‘Fight of the Year’ type fight because our styles mesh. Shawn Porter is a guy who tries to rough you up. That’s what he’s always done. With Yordenis Ugas he tried to box and he said he didn’t like that style. He said he is going back to his original style. If he brings that style to me, it’s going to be a great fight because I’m going to bring it right back to him.”

The 31-year-old Porter (30-2-1, 17 KOs) is a two-time welterweight champion whose high-pressure style has served him well in his rise in the 147-pound division. Born in Akron, Ohio and now living in Las Vegas, Porter won the IBF welterweight title with a unanimous decision victory over Devon Alexander in 2013. He lost the title, which Spence now has, to Kell Brook by a majority decision in 2014. Porter moved back into the championship ranks with a unanimous decision victory over Danny Garcia for the vacant WBC title in 2018. He successfully defended the title with a split decision victory over Yordenis Ugas in March on FOX.

“There haven’t been too many fights as a professional that I’ve been this excited about,” said Porter in a press release. “I was really excited about the Danny Garcia fight and I’m really excited about this one. Ever since Spence got a belt, I really circled this fight on my calendar. Preparation is the key. I think I have everything it takes to beat Errol Spence. I’m very confident and my team is confident in what I have to do on September 28. We’ll be ready.”

Dirrell vs. Benavidez promises to be a hotly contested battle for the WBC Super Middleweight title. Dirrell is a two-time WBC 168-pound world champion and will bring experience, while Benavidez will bring his high-octane style.

The 34-year-old Dirrell (33-1-1, 24 KOs) won the WBC title for the first time with a unanimous decision over Sakio Bika in 2014. The native of Flint, Michigan lost the title the next year to Badou Jack by majority decision. He put together six straight victories after that loss to get back into position to fight for the championship again. He won the title with a technical decision victory over Avni Yildirim in February on FS1. Dirrell is the younger brother of Andre Dirrell, who won a bronze medal as a member of the U.S. Olympic boxing team in 2004.

“I’m going to work my butt off, putting in extra hours in the gym, because this is one of the toughest opponents I’ve ever fought,” Dirrell said. “He’s young and he’s tough. But I’m more than ready for anything that he can bring. I bring an exciting fight. He knows that. The world knows that. He can talk, but nothing matters but what happens in the ring. I wanted this fight to be out west because I will fight anybody anywhere. It’s only two people in the ring and we’re going to give a good entertaining fight for the fans.”

Benavidez (21-0, 18 KOs) won the WBC title with a split decision victory over Ronald Gavril in 2017. Fighting out of Phoenix, Arizona, Benavidez successfully defended the title with a more convincing unanimous decision over Gavril in the rematch four months later. The 22-year-old returned to the ring to score an impressive knockout victory over veteran J’Leon Love in March on the Spence vs. Garcia PBC on FOX Sports Pay-Per-View.

“I’m looking forward to reclaiming my WBC belt in my next fight against Anthony Dirrell,” said Benavidez. “This fight is overdue and I guarantee I will be ready for whatever he brings to the ring. The fans are really going to enjoy this one.”

Bohachuk to main event next Hollywood Fight Night
Advertisement
To Top
We use cookies to ensure that we give you the best experience on our website. If you continue to use this site we will assume that you are happy with it.OkPrivacy policy