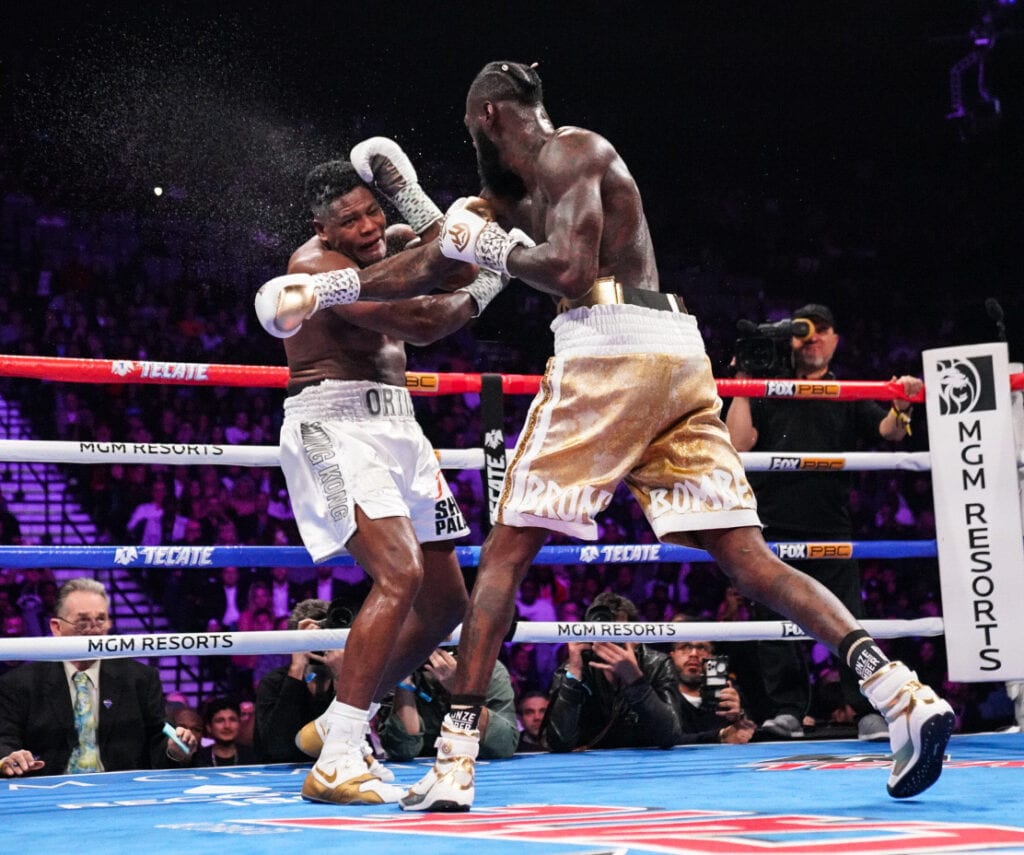 Wilder KOs Ortiz with one punch in rematch

The night at the MGM Grand in Las Vegas, Nevada ended with a bang, as Deontay Wilder knocked out Luis Ortiz in the seventh round to retain his WBC Heavyweight title to close out the FOX pay-per-view.

It didn’t start off that way, however, as early on in the contest, Wilder was being outboxed by the Cuban challenger, Ortiz. Ortiz was scoring with his left and was moving around pretty freely. That, in fact, seemed from the onset similar to their first contest that took place back in March 2018. Wilder eventually won that fight by 10th round TKO.

It seemed that either Wilder was taking off the early rounds or as the broadcast mentioned, not letting his hands go. All of that changed however, in the seventh round, as Wilder ended the fight the way he has so many others.

He measured Ortiz coming in, slightly, with a right that landed on the button of Ortiz and planted him. And, this one was over at 2:51 of the seventh.

Deontay Wilder with the 1 punch KO of Luis Ortiz in the 7th round pic.twitter.com/jugoic9XEy

Ortiz laid on his back with a cross-eyed look for the first few seconds then tried to roll over and get up, but referee Kenny Bayless reached 10 with him trying to stand up.

Wilder is a man of his word. Before the fight, the build-up to it was that he only had to “be good for one second,” and that was in fact, all he needed to land a right to Ortiz.

Before the stoppage Ortiz seemed he was fighting his best fight and was in control for six rounds. But, that is how impressive it was, as it was over in seconds from one huge punch by Wilder.

Wilder, now 42-0-1, 41 KOs, told the PBC broadcast immediately after the fight that he was waiting, patiently, for his chance,

“With Ortiz, you see why no other heavyweight wants to fight him. He’s big, he’s southpaw…

And when it came, Wilder delivered the ninth knockout in his 10 defenses of his WBC Belt.

After the fight, all eyes on Wilder begin as he mentioned in the ring that the much-awaited rematch with Tyson Fury is slated for February 2020.

The two fought to a disputed draw in December of 2018, where Fury just beat the 10 count in the 12th round after absorbing the Wilder right. The same right that Ortiz could not get up from.

We’ll see how all of that plays out and if any of that changes, if Andy Ruiz Jr. retains against Anthony Joshua on December 7th in Saudi Arabia.

The safe assumption that if Ruiz wins, that Wilder would want to unify with Ruiz. In the meantime, if Wilder-Fury 2 is next up for both of them in 2020, it is going to be must-see boxing in the early part of next year.

Santa Cruz victorious over Flores
Valdez defeats Lopez in featherweight debut
Advertisement
To Top
We use cookies to ensure that we give you the best experience on our website. If you continue to use this site we will assume that you are happy with it.Ok