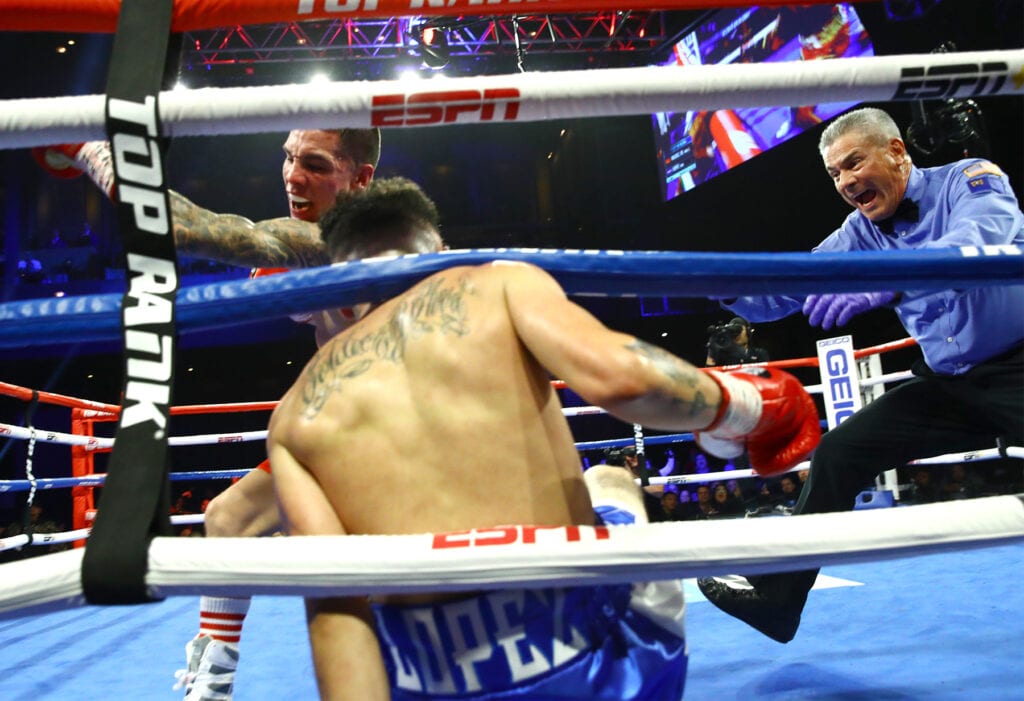 Oscar Valdez’s featherweight debut was a tough one as he overcame getting knocked down to stop late-replacement Adam Lopez in an entertaining main event in front of a fired-up crowd at The Chelsea inside The Cosmopolitan of Las Vegas Saturday Night on ESPN+.

Lopez took the bout Friday afternoon after Valdez’s original opponent, Andres Gutierrez, missed weight by 11 pounds. The thirty hours Valdez of preparation was noticed from the onset as a game Lopez was outboxing Valdez in the early rounds. So much so that Lopez knocked Valdez down with a left uppercut in the second round.

ANOTHER ANGLE: A flash of a left uppercut from @Adam_B_Lopez led to his shock early knockdown of Oscar Valdez. pic.twitter.com/UNsRhCZ4Jz

Once Valdez got off the deck from there is where he slowly made the adjustment. Valdez would rally to knock down Lopez (13-2) with a left hook his own in the seventh. Ultimately leading to a flurry of punches, which caused referee Russell Mora to stop the bout with seven seconds remaining in the round.

Everyone watching this live on social last night, and I concur with them is that this was a lousy stoppage by Mora. Every bad referee stoppage is going to be qualified for a long time with “in the light of recent events” on broadcasts, which everyone is just going to have to accept it for what it is. I thought Lopez was still okay to make the bell.

This bout was a WBC world title eliminator, Valdez is now in line to face champion Miguel Berchelt, who was in attendance for the fight.

“I was very surprised. I take my hat off to Adam Lopez. He’s a great fighter, great warrior, just like his father {the late Hector Lopez} was,” Valdez said. I just got hit. This is boxing. I prepared myself for two, three months for Gutierrez, but that’s no excuse. This kid is a warrior.

“Berchelt is a true champion inside the ring and outside the ring. Fans love him. That’s the one I want to fight. He has that WBC belt, and he’s trying to take it back home.”

Berchelt and Valdez met in the ring, and it was pointed out by analyst Tim Bradley the size differential as they embraced for Valdez’s victory. This fight looks to be the next matchup for both as we wait for when and where these two will meet in the ring for 2020.

Wilder KOs Ortiz with one punch in rematch
Frampton cruises past McCreary
Advertisement
To Top
We use cookies to ensure that we give you the best experience on our website. If you continue to use this site we will assume that you are happy with it.OkPrivacy policy