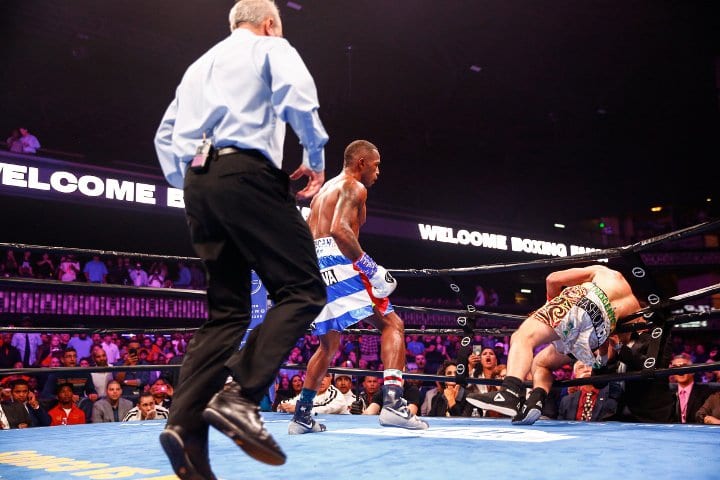 The Armory in Minneapolis, Minnesota was the site that the vacant WBA Super Welterweight title was up for grabs and the one fighter who was able to claim it, Erislandy Lara did just that in short work taking out Ramon Alvarez in two rounds. The two-round contest was the main event of Premier Boxing Champions on Fox and Lara came thru on his promise of knocking out Alvarez.

Lara claims the title in his second chance at it after the match he had earlier in the year against Brian Castano was refused by the latter and dropped the belt. This event set up the stage up Alvarez for the chance at the title, but he came into the weigh-in overweight and deemed ineligible if he were able to beat Lara. There were even concerns that Alvarez wouldn’t pass the medical examinations before the fight and that they flew in Chia Santana as a last-second replacement.

Once the bell rang on this one, Alvarez seemed like he wished it didn’t as he was not only outclassed but jumped on early by Lara. There was one moment in the opening round where Alvarez landed a punch and seemed shocked it happened.

Lara turned the lights out on any hope Alvarez had in the second round when he hit him with a combination and followed with a left that sent Alvarez flying into the ropes for the first knockdown. Alvarez beat the ten count, but Lara pounced and knocked Alvarez down again. At that moment, both referee Mark Nelson and Alvarez’s corner threw in the towel ending this contest at 2:03 of the second round.

With the win, Lara captures not only the WBA Super Welterweight title but also his first victory in the ring since 2017.

After the fight, Lara stated that the weight difference from him and Alvarez was something he felt in the match.

“I felt the extra weight,” Lara told Fox’s Heidi Androl after the win. “Maybe I shouldn’t have bothered to cut weight myself, but I wanted to regain this title. But I definitely felt those four extra pounds.

When asked who would he liked to face next, Lara said he would take on all comers.

“I’ll fight anybody in the division,” Lara noted, though with a catch. “If it has to be a rematch with someone like (Hurd or Castaño), I don’t mind doing those fights again, but I’d rather fight the very best in my division or near my division.

“I want to fight Errol Spence or (a rematch with) Canelo Alvarez.”

While none of those matches seem likely soon, keep an eye out on Michael Soro. Soro has another portion of the WBA title and is the most likely matchup as he was victorious against Anderson Prestot in July.