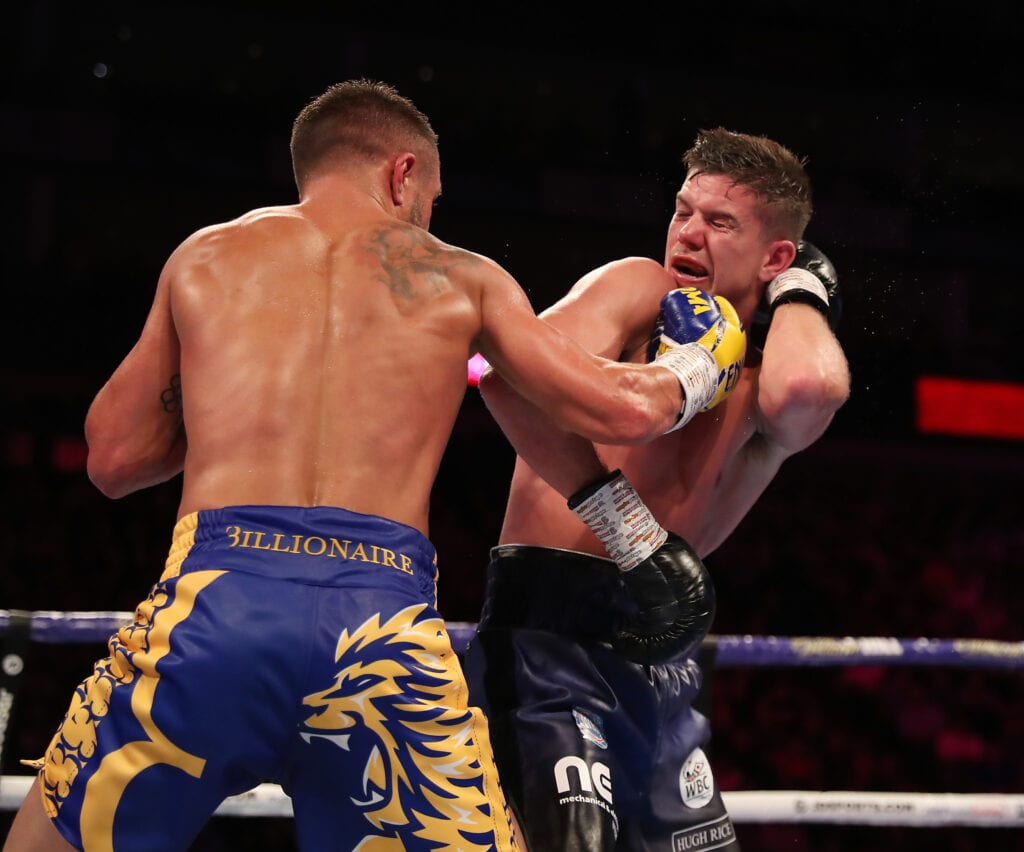 The O2 Arena in London, England set the stage for the future of the lightweight division as Vasiliy Lomachenko became the holder of the vacant WBC Lightweight title with a dominant performance over a game Luke Campbell. The judges ruled him the winner by unanimous decision with scores of 119-108 by two judges and the third having it 118-109. The scorecards don’t reflect the action that took place in the ring but more of the result of the performance by Lomachenko.

The sold-out crowd was ready for this main event after sitting thru a co-main event that had Alexander Povetkin win by unanimous decision over Hughie Fury in a test of everyone’s spirit and boxing will. The fight wasn’t entertaining to the point on the ESPN broadcast Tim Bradley at the end proclaimed that Hughie Fury “He’s terrible with it man” at the end of it.

Add a belt for the other shoulder! @VasylLomachenko defeats Luke Campbell by Unanimous Decision, and now holds 3 of the Lightweight division’s 4 world titles. #LomaCampbell #AndStill pic.twitter.com/G1eJpyxU40

This match was the opposite of that as Campbell started out keeping Lomachenko at bay, being able to use his reach to land shots in the early going. That all changed in the third round as Lomachenkp was able to snap a jab that sent Campbell’s head back and was able to get inside.

The Boxing Writer’s David Payne out of the U.K. on our latest podcast previewing the fight mentioned how Campbell would make this a technical fight and that was the gameplan for him against Lomachenko.

As the fight continued, Lomachenko does in the ring, which was attack the body and hit from all angles against Campbell. This was made apparent in the later and championship rounds. Campbell was game for this contest while coming in as an underdog in his native country, was looking to upset and had moments in this fight where he had Lomachenko in trouble.

Then in the eleventh round, Lomachenko knocked Campbell down with a left that landed flush. He beat the ten count, but at that point in the contest, the match was well in control and in favor of Lomachenko.

The final punch stats for the bout shown that Lomachenko had landed 211 shots compared to 131 for Campbell but the shots that Lomachenko landed clearly were the ones the judges saw the most in what was a very fun fight.

Lomachenko said after the fight, “He (Campbell) has a good amateur experience and a good technical fighter. That is what it was hard for me to adjust to him. You need to do something to diminish him, but it was his reach.”

Will he fight the winner of Richard Commey and Teofemo Lopez?

“Of course,” Lomachenko said. “We’ll see. It depends on the promoter.”

He even hinted that Lopez wouldn’t win the fight as well upcoming in December. That may, of course, is in retaliation to the trash talk Lopez has been saying all year in terms of wanting to fight Lomachenko. We’ll wait and see now who faces Lomachenko next but this definitely means that the winner of Devin Haney and  Zaur Abdullaev is going to have to wait a little longer for a title shot.

Connor Coyle too much for Ramirez
Lara wipes out Alvarez for WBA title
Advertisement
To Top
We use cookies to ensure that we give you the best experience on our website. If you continue to use this site we will assume that you are happy with it.Ok