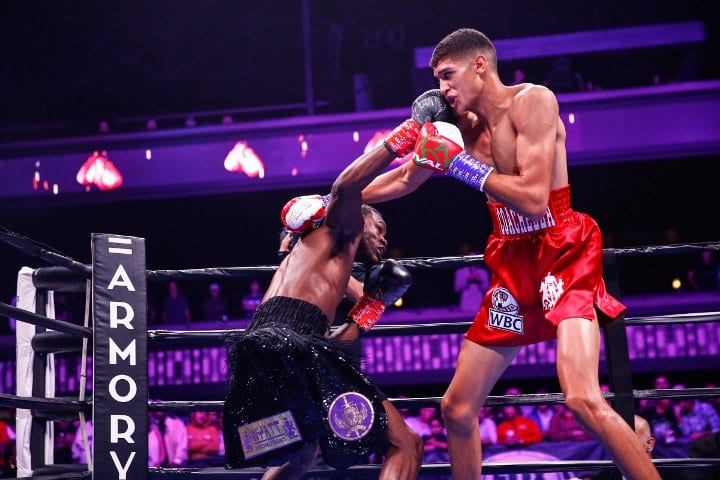 The most exciting match on Premier Boxing Champions that aired on Fox Saturday night was a back and forth matchup between welterweight prospects Sebastian Fundora and Jamontay Clark. After ten rounds, however, the result was a split decision draw for their efforts at the Armory in Minneapolis. This battle was the co-main event to what would become a short night for Erislandy Lara retaining the WBA Superwelterweight title against Ramon Alvarez.

The contest ending in a draw was the right decision as the judge’s scorecards had it 98-92 Fundora, 96-94 Clark and 95-95 even. Despite the wide scorecard for Fundora, this match was one that was pretty even in the ring.

What made a magnificent sight on television is the height that both of these two had in the ring. Fundora nicknamed ‘The Towering Inferno’ lived up to the billing as standing at 6’7″ was decidedly taller than Clark, who himself was 6’2″.

What made this matchup so close throughout the ten rounds was the nature of how the fight went. It was classic back and forth action wherein one round Fundora would be in control and then Clark the next round would adjust and control the pace.

A great example of this was during the middle rounds. In round six, Fundora was able to land a shot that staggered Clark which had him clinging onto Fundora which led to both men falling to the canvas. While Fundora had won that round clearly, the seventh round was all Clark as he made the adjustment and was able to attack Fundora from the inside. This constant back and forth took place over thirty minutes of the match with Clark winning rounds by controlling the pace, while Fundora would win rounds with powerful shots on the outside.

When asked post-fight by Heidi Androl in the ring, both fighters had no problems in a rematch with one another. This rematch between these two up and comers would be one to keep an eye out on as this match without question was the best part of the broadcast.