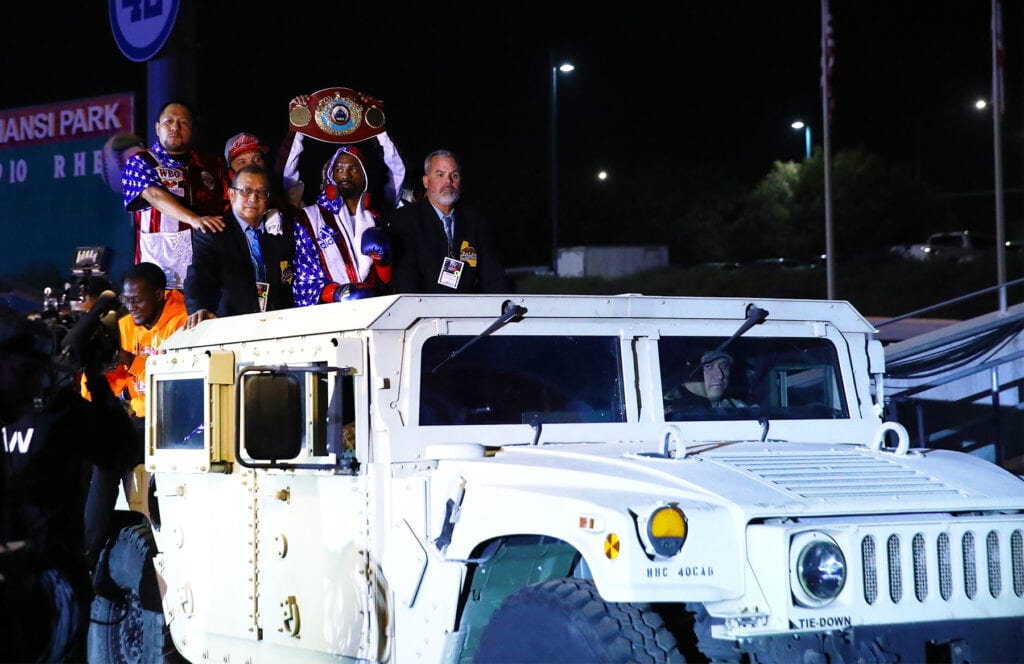 Herring retains in defense against Roach

In the first defense of his WBO junior lightweight world title, Jamel “Semper Fi” Herring came in with a convoy and left out with a unanimous decision victory on Veterans Day Weekend win over challenger Lamont Roach Jr. in front of 7,412 fans at Chukchansi Park in Fresno, California.

Herring controlled the action early and for a majority of the fight, but Roach landed a flush right hand at the end of the 11th that nearly sent Herring through the ropes. Roach pressed the action in the 12th, but it was too little, too late, as “The Fighting Marine” made his first successful title defense.  Scores after twelve rounds were 117-111 twice and 115-113 in favor of Herring to retain.

HIGHLIGHTS ➡️ A look back at some of the key moments in what was @JamelHerring's first successful Junior Lightweight title defense Saturday night in Fresno. #HerringRoach pic.twitter.com/V821X7WsUg

“I won {the title} on Memorial Day Weekend and I defended it on Veterans Day Weekend, so it definitely means a lot to all of our troops out there defending our country and still in harm’s way,” Herring said after the fight. “This is for ya’ll. I couldn’t lose it on our weekend. It means a lot to still be a world champion.

The shot that caught Herring from Roach was a good one, and he admitted as much after the fight as well.

“It was a good shot,” Herring agreed. “I thought I had my hand up, but Lamont cuffed it behind it, and I can’t take nothing from it. It was a clean shot. I just had to toughen it out and fight it out. I couldn’t go down. I’m a Marine.”

Said Roach after the effort: “We knew we had to dig down. When I hurt him, all that was on my mind was finishing him. I’m coming into unchartered territory.”

It was a tactical fight and one that saw Herring cruise to a win. Next up, Herring mentioned that he wants to unify after this match.

“Like I said, Miguel Berchelt is considered number one, the best super featherweight in the world. In order to be the best, you have to keep testing yourself,” Herring claimed after the fight.

Herring wants the WBC champion Berchelt next, something he’s been wanting for a while now. Let’s see if Top Rank gets these sides to collide in 2020.