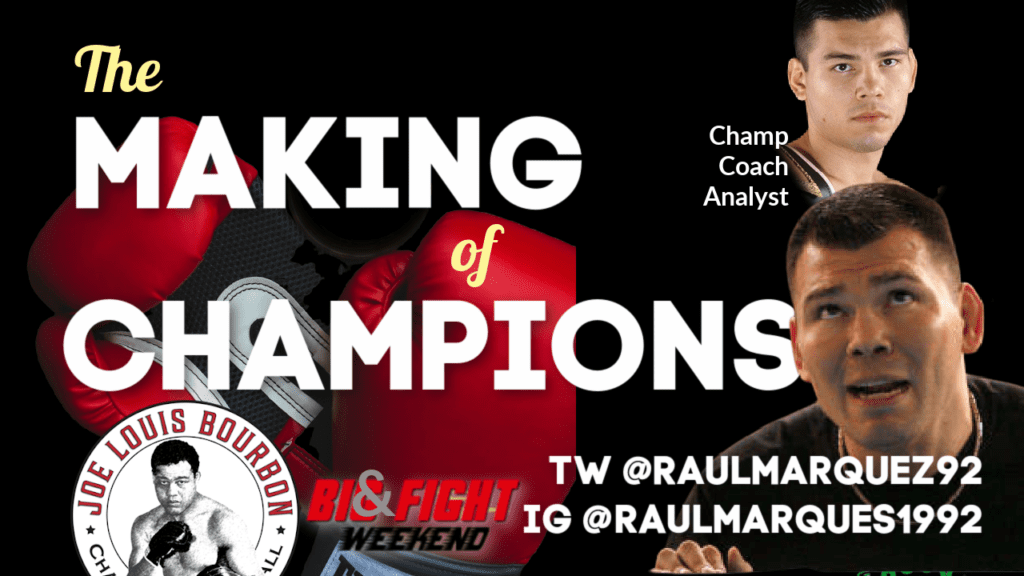 The “Making of Champions” is a podcast that airs every Thursday at 5 pm ET on the Joe Louis Bourbon Facebook Page with Tonya Cole and yours truly. This week’s guest on the program is the analyst on Showtime and former IBF world champion Raul Marquez.

Marquez was on the call from “The Fightsphere” at the Mogehan Sun Casino on the latest Shobox: The Next Generation broadcast, and one of the topics we cover on the show is how the previous guest Charles Conwell looked and how he was the quintessential Shobox fighter. Conwell was victorious in the main event of that broadcast, stopping wendy Toussaint in nine rounds.

“He (Conwell) was an Olympian he was a decorated amateur career. He’s undefeated. Gret things are expected out of him and you know he’s been sparring top-level guys in the gym,” Marquez told us on The Making of Champions.

“This is the type of guy that usually gets tested with a guy like Toussaint and like I’ve always said there’s levels to this game. You got Toussaint who was 12-0 that did not have the amateur pedigree that Conwell did.

I believe in amateurs because I come from that. I had a big amateur pedigree and when you turn pro, the styles that you see, you’ve seen them all.”

Go ahead and check out our latest conversation we had with Raul, where we ask shares insights on the current contenders, opens up about growing up in Mexico, and how he sees the rise of boxing in 2020, post covid. We also talk about his thoughts, of course, on the upcoming pay=per-view on October 31st between Gervonta Davis and Leo Santa Cruz, which he will be on the hand for calling the Spanish broadcast.

Making of Champions: Charles Conwell
It’s Lomachenko-Lopez Fight Day!
Advertisement
To Top
We use cookies to ensure that we give you the best experience on our website. If you continue to use this site we will assume that you are happy with it.OkNoPrivacy policy