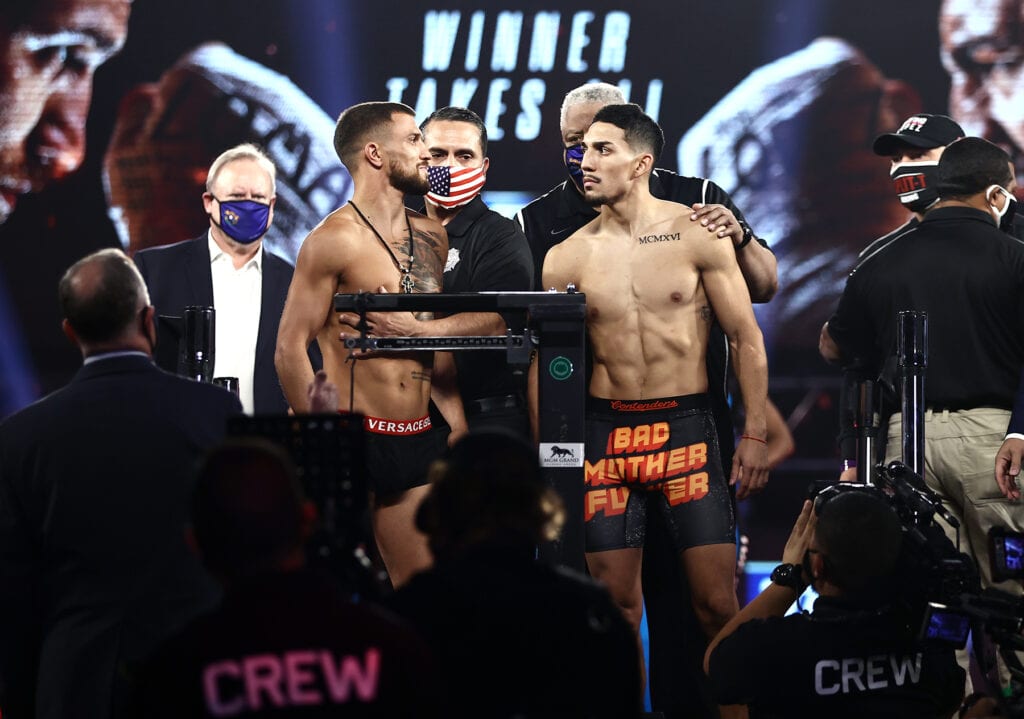 Tonight is the night of the undisputed lightweight contest between VasiliyLomachenko and Teofimo Lopez as they both square off to on ESPN with the card starting at 7:30 pm ET.

Check out our breakdown of this contest as we are joined this week by TC Martin of the “TC Martin Show” out in Las Vegas, as he gives us his thoughts on the huge undisputed contest from “The Bubble” Saturday night in Las Vegas.

The contest on ESPN was heavily promoted all week long, and you know it is a big fight fee when they air on ESPN proper two guys getting on the scale in their boxers and conversations just leading up to what will go down in the ring. Both fighters made weight with no drama, and by the end of the night, barring a draw or no contest, we’ll have a ruler at lightweight.

I mention this on the podcast, and Lopez speaking to Boxingscene, talked about how a fight of this magnitude wouldn’t be held at Madison Square Garden in New York like it was tentatively before the pandemic.

“But we still know that the fans are gonna be watching back at home. It’s gonna be live on ESPN, and you don’t even have to pay a dime [on pay-per-view]. So, everything happens for a reason. You know what I mean? All I know is that after this fight, I’m going back to Madison Square Garden, and I’m bringing back five more belts.”

While Lopez is confident that he will, so is, of course, Lomachenko, who came in at most books as 3 to 1 favorite to walk out of the bubble victorious.

“When I came into professional boxing, I always wanted fights with top fighters and world champions,” Lomachenko said to the media during a recent Zoom call, “Now, I have [another] top fighter in front of me.

The talking and staring are over for both of them, and well all get to witnesses how it all plays out Saturday night.