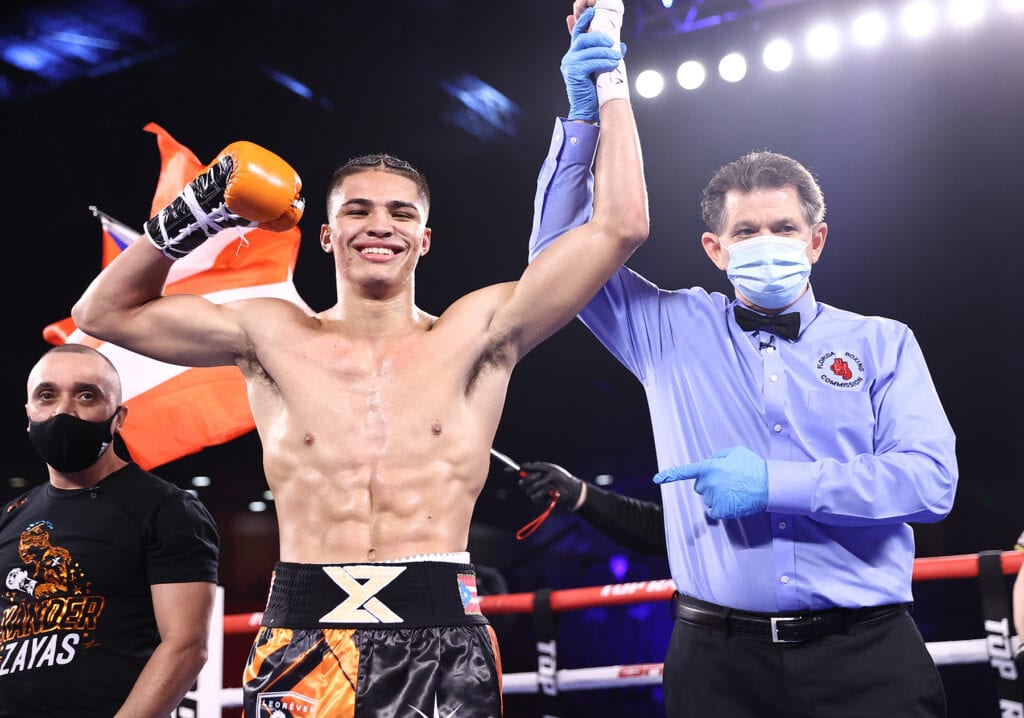 Xander Zayas Back In Action In Tucson

Xander Zayas, the 19-year-old puncher from San Juan, will step up in class when he meets Jose Luis Sanchez in a six-round junior middleweight bout this Friday, Sept. 10 at the AVA Amphitheater at Casino Del Sol in Tucson, Arizona.

Zayas-Sanchez and an eight-round lightweight battle between the unbeaten Raymond “Danger” Muratalla and Ecuador’s Jose Angulo will be part of the undercard of Oscar Valdez’s WBC super featherweight world title defense against unbeaten Brazilian Robson Conceição.

Who’s most likely to steal the show? 🤔 pic.twitter.com/rKK1jRuh9W

Promoted by Top Rank, limited tickets priced at $25 are on sale now and can be purchased by visiting Etix.com.

Zayas (9-0, 7 KOs) has emerged as one of the sport’s top prospects since debuting as a 17-year-old in October 2019. He fought four times in 2020 and has already fought three times in 2021. He shut out James Martin over six rounds in February, blasted out Demarcus Layton in 56 seconds in April, and followed that up with a third-round demolition over Irish veteran Larry Fryers in June. The Fryers fight was Zayas’ welterweight finale, as he’s testing the junior middleweight waters versus Albuquerque native Sanchez (11-1-1, 4 KOs), who is coming off a draw in May against respected spoiler Adrian Granados. Sanchez has not lost since 2013.

In other undercard action on ESPN+:

2016 Mexican Olympian Lindolfo Delgado (12-0, 11 KOs), who made his Top Rank debut June 19 with a unanimous decision over Salvador Briceno, returns against Miguel Zamudio (45-16-1, 28 KOs) in an eight-rounder at junior welterweight.

Mexican junior welterweight knockout artist Omar “Pollo” Aguilar (21-0, 20 KOs) will step up in class against Paraguay’s Carlos Manuel Portillo (22-3, 17 KOs) in an eight-rounder. Aguilar has 15 first-round knockouts on his ledger and has not been extended past three rounds since December 2018.