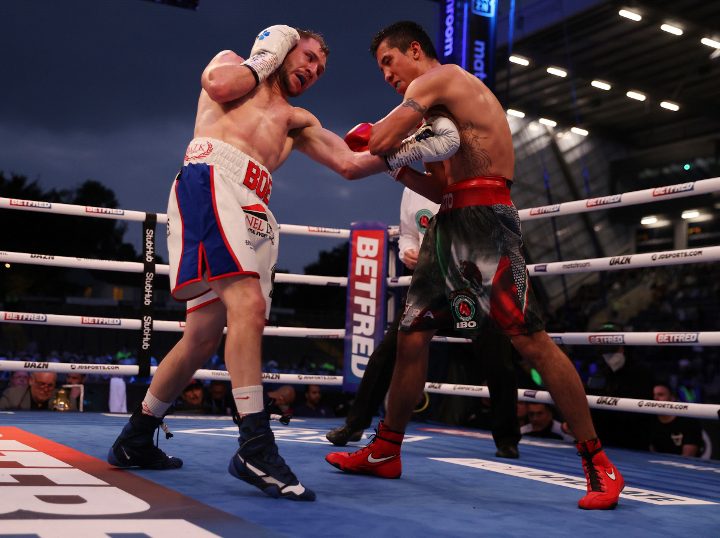 In the form of his life, Yorkshire’s Hughes (24-5-2, 5 KOs) upset the odds to outclass Jovanni Straffon over 12 rounds at Emerald Headingley Stadium in Leeds on Saturday to wrestle the IBO 135lbs crown from the heavy-handed Mexican.

Many thought Straffon’s power would be a key factor, but ‘Maximus’ looked the more powerful out of the pair as he came so close to forcing a stoppage in round five, eventually taking the fight with wide scores of 120-107, 120-107 and 119-109 on the judges’ cards.

Delighted is an understatement pic.twitter.com/2lba6YGLvt

Hughes has now won the WBC International, British and IBO Lightweight Titles in his four fights since lockdown, being the better underdog in three of them, and the 31-year-old who is trained by Sean O’Hagan and managed by Stefy Bull has his sights set on a showdown with undefeated WBC Lightweight World Champion Devin Haney.

“Matchroom have provided so many opportunities for fighters, past and present, and to know those opportunities will be heading my way is all I could ask for,” said Hughes. “The victory wasn’t a surprise, not to me anyway, given the preparation I’d put in and the time we had spent tailoring our approach to deal with someone like Straffon. But to win every round and to feel that comfortable feels pretty epic in front of a Yorkshire crowd.

“It’s a pleasure to share a card with that amount of boxing talent and the fact that people think my performance stole the show feels unreal. I’m just glad I got to showcase my skills and make my team and family proud. I only spend a short time reflecting after any fight with Sean and the team, but after that I move on and we agree what step we take next. I’ll reflect properly on my achievements when I retire. I don’t intend to get too drunk on my own success.

“I’ve been on the domestic scene since Scotty Cardle and I fought him back in 2013. I’ve mixed it with the best British and European talent that was there at the time. Boxing careers don’t last forever so my hope is that Matchroom can deliver bigger fights than any of those I’ve had so far, to capitalise on my recent success.

“I’ve already spoken about Devin Haney simply because his opponents seems to be evading him. I might not be the ‘name’ he wants, but I’m game and willing to fight. If that doesn’t come off, then I’m only looking forward in the rankings. I’ll take whatever comes my way.”