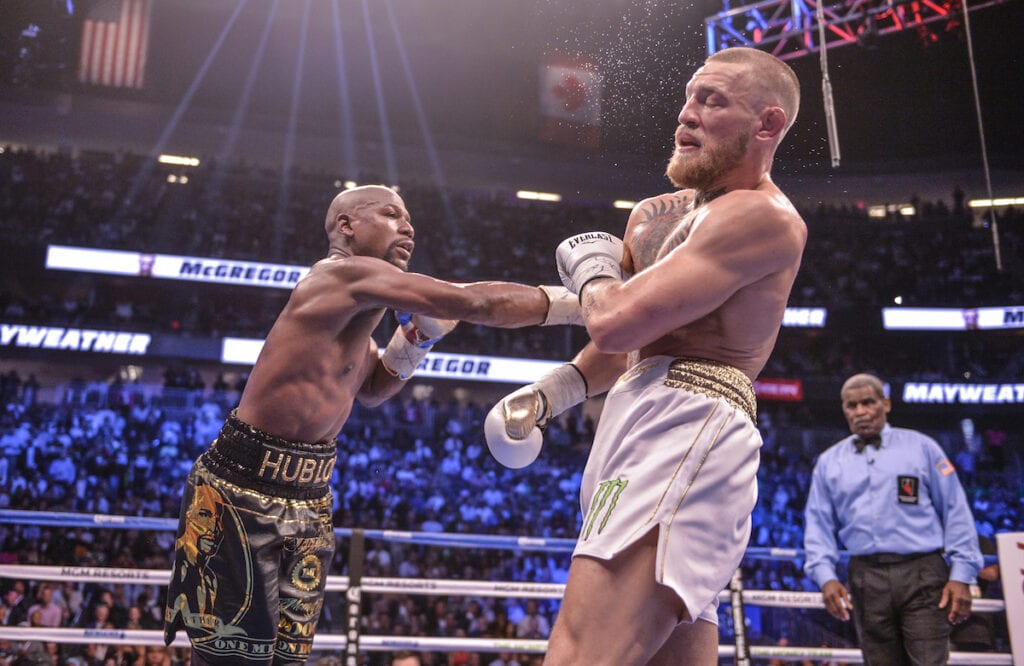 Coming up soon just north of Miami, Floyd Mayweather will be back in a boxing ring for the first time in four years. This, as he takes on Youtube star turned upstart boxer Logan Paul in an eight round exhibition that will air on Showtime PPV. And while the questions about the about abound, it basically boils down to: will this bout have action and exciting moments to reward those paying or will it devolve into a wasted evening that had tons of hype but was short on memorable action?

That’s what we are aiming to find out.

Here are the important particulars leading us to the matchup: the 44 year old Mayweather is a former five division world champ. He retired with a 50-0 record four years ago with previous career wins over the likes of Arturo Gatti, Oscar De La Hoya, Miguel Cotto, Canelo Alvarez and Manny Pacquiao. Mayweather was voted “Fighter of the Decade” for the 2010’s by the Boxing Writers Association of America late last year.

“Money” Mayweather, who’s made over $400 million in the ring, is looking to cash-in, as he always has. This includes his last actual fight in the ring having been against MMA Mega-star Conor McGregor (photo top), whom he defeated in a full-on boxing match in August of 2017.

Mayweather is clearly the much more experienced fighter and from a boxing technique and savvy standpoint, this “exhibition” is a mis-match.

Meanwhile, the failed actor turned Youtuber Paul has landed on this PPV feature by virtue of his massive internet and social media following like 24 million subscribers on both his Instagram and Youtube accounts.

While Paul and his younger brother (and also failed former actor, Jake) have been online success stories for their crazy stunts and attention getting internet videos, he’s short on ring experience.

In fact, Logan Paul has only been in the boxing ring, once before fighting as part of Matchroom Boxing card in Los Angeles in November of 2019. That’s when he fought in a six-three minute rounds in a sanctioned Crusierweight fight against British YouTube personality KSI. KSI won the split decision with actual California judges scoring the bout.

However, that fight attracted non-boxing (or even sports fans) buzz through the net and the likes of Instagram and Twitter. Logan Paul’s persona grew and here we are with him stepping through the ropes at Hard Rock Stadium across from Mayweather.

It was understood all along for this exhibition that Paul (who’s nearly 6 inches taller) would be significantly heavier than the former world champ. And, that was the case Saturday, when he weighed 35 pounds more than Mayweather.

Will that matter? Will the inexperienced Paul be able to track down, cutoff the ring and repeatedly connect against Mayweather?

Or will Floyd give him an artistic boxing lesson, use movement, his jab and skills and turn it into a lengthy snoozer of a fight? We will soon know.

Keep in mind another important point, the fight is unsanctioned by the Florida Boxing Commission due to the weight disparity. So, there are no official judges, if it goes the distance.

And, that’s where the public may end up being disappointed, if the fight is declared a spoof “draw” with no winner named.

Then again, knockdowns are allowed and a stoppage by the referee assigned is too, but it’s not likely with 12 oz gloves on that there will be much big punching and knockdowns.

And, we’re about to all see it unfold together.