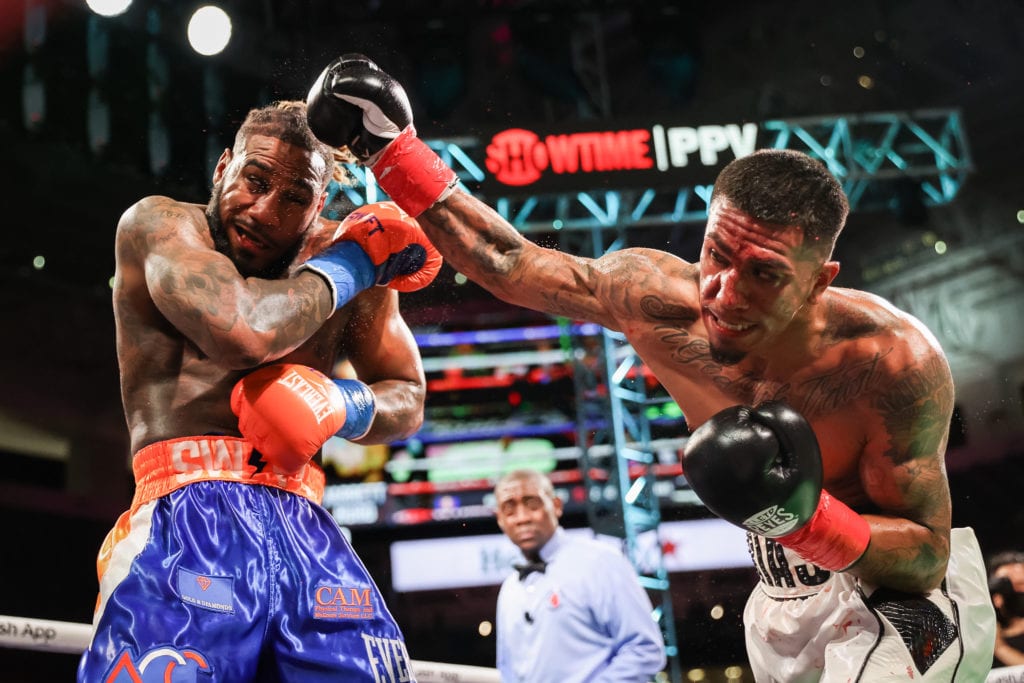 Jarrett Hurd made his return to the ring Sunday as he was punished by Luis Arias at Hard Rock Stadium in Miami, Florida, on the undercard of the Floyd Mayweather-Logan Paul exhibition

The final scorecards were 95-94 in favor of Hurd but overruled with cards of 96-93 and 97-93 in favor of Arias in a fun action fight that had plenty of shots going but was an alarming wake-up call for the former 154 lb. world champ, Hurd.

Before the opening bell, Hurd had a six-inch reach advantage (78 to 72 inches), and that was going to be the advantage in the fight, but that was not the case. Instead, Arias came out in the opening round the aggressor and was outworking Hurd by throwing more. From there, the summer showers began, which started a delay in the start of the second round as they make sure the rain stopped.

A rain delay in boxing, that’s a new one

Once that settled, Arias continued his attack on Hurd. Hurd, however, was able to counter with shots of his own, and that was when this fight officially picked up.  In his second fight under trainer Kay Koroma, Hurd, now 24-2, showed especially in early rounds  some nasty overhand shots. It was midway through the third round that a clash of heads caused both fighters to start bleeding in this contest.

However, Arias, now 19-2-1, continued this onslaught in the fourth as he kept close inside Hurd while still able to land hard overhand shots. In the first four rounds, this fight had shades of the contest he had against Julian “J-Rock” Williams, which he lost the unified titles at super welterweight. One thing that was apparent watching was Hurd was having a lot of success midway through the fight trying to land uppercuts, but Arias throwing overhand rights was a note that he would play until it broke.

Hurd finally stunned Arias near the end of the sixth round with a right that had him buckled but was able to evade what Hurd had thrown and was able to escape the round. Seventh-round got a little rough as the referee Christopher Young warned Hurd but back-to-back shots of low blows.

The fireworks continued into the eighth round as Arias made it very tough for Hurd as he kept smothering him in the corner. Oddly enough, there was a moment where Arias looked to be knocked down in the closing moments of the fight but was nit ruled a knockdown. Not the best day for Young here in the ring.

We had another weather delay before the start of round nine for the same issue before the second. This would play a factor as Arias was ruled down, which looked like a slip to start it.  Despite that, Arias was still the aggressor inclose and throwing with bad intentions. Arias came into this fight winless in his last three fights, but that now has changed. We’ll see if both go back down to join a crowded field to contend at 154 pounds with the win.