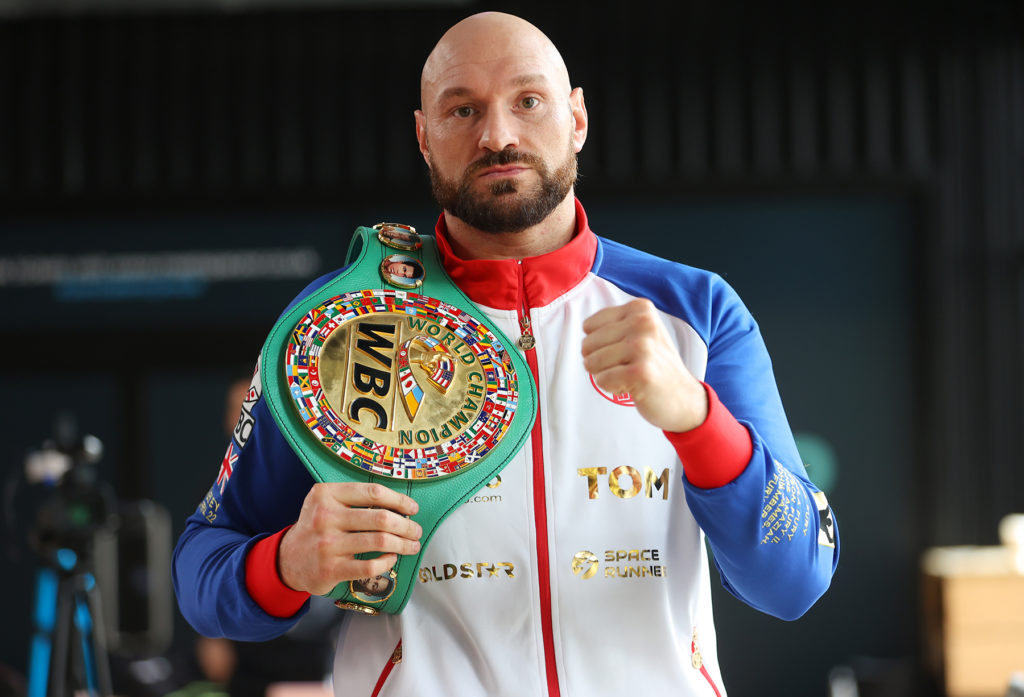 Heavyweight champion Tyson Fury on Tuesday addressed his relationship with Daniel Kinahan, who has served as Fury’s adviser but who was also accused last week by the United States government of being an organized crime kingpin responsible for ordering murders, distributing cocaine across Europe and money laundering.

Fury was questioned on the day of his open workout ahead of his mandatory title defense against WBC interim titleholder Dillian Whyte on Saturday (ESPN PPV, $69.99) at London’s Wembley Stadium, where a sellout British-record crowd of 94,000 is expected.

“I don’t get involved in other people’s business and I keep mine to myself and that’s it,” Fury said in a freewheeling question and answer session with reporters following the workout. “What other people do in their lives – I’ve got my own troubles and my own problems to work on myself with a wife and six kids, so I keep my business to myself.”

But, Fury has previously acknowledged Kinahan as his adviser, been photographed with him and also publicly thanked him in June 2020 for helping make a deal for Fury to face then-unified titleholder Anthony Joshua for the undisputed title, although the fight ultimately did not come off.

Asked about his relationship with Kinahan, Fury downplayed it.

“The man’s been a boxing fan. Not much more I can say,” Fury said. “There’s not much more of a relationship. There is none.”

Asked if he has severed his ties to Kinahan, Fury was blunt.

“That’s none of your business and none of anybody else’s business,” he said. “My business is my business, your business is yours and that’s it. (The accusations have) nothing to do with me. I’m just a stupid boxer who gets punched in the face for a living.

Later, Fury sat down with the United Kingdom’s Sky Sports and was again quizzed about his connections to Dubai-based Irish national Kinahan, whom the U.S. government last week formally sanctioned along with six of his associates and three companies he is said to be involved with. A $5 million reward was offered for the “financial destruction” of the Kinahan Organized Crime Group and/or information leading to the arrest and conviction of any of the seven named in the U.S. government’s announcement.

Fury said to Sky that Kinahan had no involvement in making the fight with Whyte and reiterated that Kinahan’s situation is none of his business.

The sanctions against Kinahan mean that if anybody is found to be doing business with him, his associates or the companies he is involved with they could face civil or criminal charges.

“I haven’t done any daily business with him for a long time. I think it was 2020 that was the end of the business when the fight with Joshua didn’t happen and that was it,” Fury said.

When Fury was pressed hard about Kinahan again, he ended the interview.

“I think it’s gonna be a great fight on Saturday night and I’m not here to talk about politics, war or religion with you. You’re trying to probe for me to say something I’m not interested in other people’s concerns,” Fury, growing testy, said. “Don’t care. None of my business at all. I’m a boxing man. I’ve got a fight to think about and that’s enough said. Thank you very much. I won’t be doing anymore interviews with Sky.”