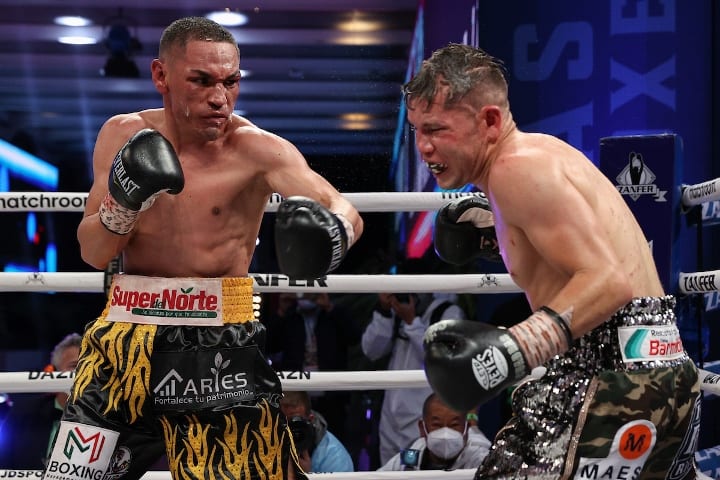 Golden Boy Promotions was the lone promoter to make an offer at the WBA purse bid on Tuesday for the fight between junior bantamweight champion Juan Francisco Estrada and secondary titleholder Joshua Franco.
Golden Boy’s Robert Diaz, taking part in the video conference, bid the minimum $120,000 to claim promotional rights to the 115-pound world championship fight. Golden Boy also had to pay a $5,000 fee to participate in the purse bid.

Estrada is due 75 percent of the bid ($90,000) and the Golden Boy-promoted Franco is entitled to $30,000, but he would make much more under the terms of his promotional agreement.

In securing the rights to the fight, Golden Boy gave the WBA June 11 in Los Angeles or July 16 in either California or Nevada as dates and sites for the fight, which would likely headline a DAZN card if it happens.
Golden Boy being the lone bidder came as a surprise because on Monday, Golden Boy and Estrada promoter Zanfer Promotions asked the WBA for a one-day postponement of the purse bid because they said they were close to making a deal. But, they did not finalize a deal and when it came time to unseal the bids, Zanfer did not make an offer.

Estrada has been co-promoted in recent fights by Eddie Hearn of Matchroom Boxing and he mentioned the possibility of trying to do a doubleheader on DAZN with Estrada-Franco as the main event and Jesse Rodriguez (15-0, 10 KOs), Franco’s 22-year-old brother and the newly crowned WBC junior bantamweight titleholder, making his first defense in the co-feature in their hometown of San Antonio.

However, Hearn told Big Fight Weekend shortly after the purse bid took place that, while he did look at that possibility, he ultimately was not interested and said he is no longer Estrada’s co-promoter.

Whether Estrada (42-3, 28 KOs), 32, of Mexico, would fight Franco for such short money anyway remains to be seen, but Golden Boy told Big Fight Weekend that it was amenable to discussing a deal with Estrada and his team in order to make sure the fight happens.

Estrada, who is one of boxing’s top pound-for-pound fighters, has won six fights in a row, including against Srisaket Sor Rungvisai in their rematch, Carlos Cuadras for the second time and a disputed split decision in a rematch with rival Roman “Chocolatito” Gonzalez in a title unification bout in his last fight in March 2021. It was a fight of the year candidate.

Estrada and Gonzalez, who won their first fight, were scheduled for a much-anticipated rubber match on Oct. 16, but Gonzalez came down with Covid-19 and it was postponed.

The fight was rescheduled for March 5 in San Diego, but then Estrada came down with Covid-19, forcing him to withdraw and Gonzalez instead easily outpointed WBC flyweight titlist Julio Cesar Martinez, who took the fight on a few weeks’ notice and moved up in weight to replace Estrada.

Hopes of immediately rescheduling Estrada-Gonzalez III were dashed because after Gonzalez beat Martinez, the WBA ordered Estrada to next face Franco in the mandatory bout as part of its movement to reduce the number of titles it sanctions and to get down to one titleholder per division.

Franco (18-1-2, 8 KOs), 26, is coming off three consecutive fights against Australia’s Andrew Moloney. He edged him by unanimous decision to claim the secondary belt in June 2020 and their immediate rematch resulted in a second-round no decision five months later. They met for a third time in August and Franco won a unanimous decision to retain the title by scores of 116-112 on all three scorecards.