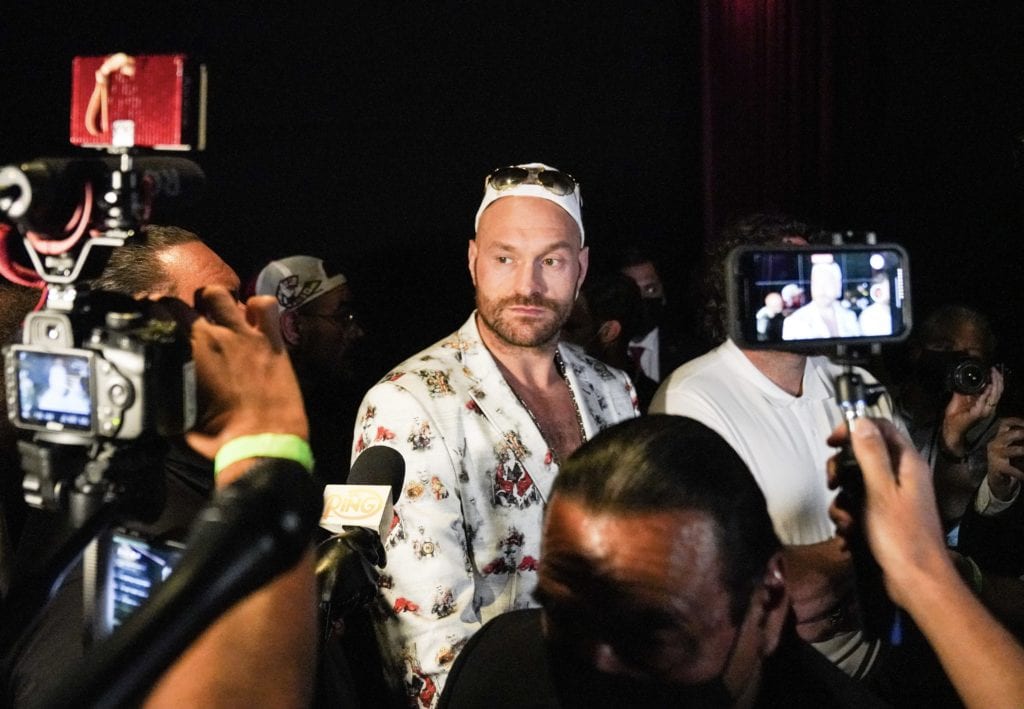 You read that correctly.

Now, see it for yourself as Las Vegas Exotic Cars put out the photo on Instagram thanking Fury for “stopping by,”

Fury allegedly tested positive for the Coronavirus last week (along with an unconfirmed number of members of his training camp in Las Vegas). However, he’s never publicly commented on, much less taken responsibility for, that having stopped the highly anticipated third fight with Wilder, by testing positive.

“The Gypsy King” posted on Instagram earlier Wednesday morning that he was grateful to the fans who had voted for him for the ESPN “ESPY” Award for top boxer of 2020. Those awards were given out on Sunday night in a New York ceremony and televised live on the network.

That was the first time he had surfaced publicly or online since the news of him allegedly being Covid 19 positive and supposedly on quarantine for 10 days per CDC, Covid-19 guidelines.

As we wrote last Thursday Fury was deemed to be positive, and as boxing insider Dan Rafael reported at least three others in the camp were also positive and that Fury never received a second vaccination shot to help insure his immunity to the virus.

It further means that all of those positive should have been isolated, etc., and definitely not in public places without a mask/social distancing at least through the end of this week.

Fury, 30-0-1, 21 KOs, defeated Wilder, 42-1-1, 41 KOs, by seventh-round TKO in their matchup February 2020 in Las Vegas and had originally intended to have their third fight last Summer. That is until the Covid-19 pandemic over took everything, including shutting down boxing for over 90 days. The aftermath, including not being able to have fans attend repeatedly delayed Fury-Wilder 3 from being able to happen deep into the Fall.

Fury then tried to get out of the third fight with Wilder to be part of a possible Undisputed title fight with England’s Anthony Joshua. Instead, a California arbitrator ruled in early May that Fury had to fight Wilder next.

There is a very small chance that if Fury was not symptomatic, and had been repeatedly testing negative this week that he would be clear to be back in public, etc.

However, none of that is known.

The only thing that is known for now is the Fury was out and about earlier today, while Wilder is “left out” in his hopes to avenge his first ever pro loss and regain the WBC portion of the title.