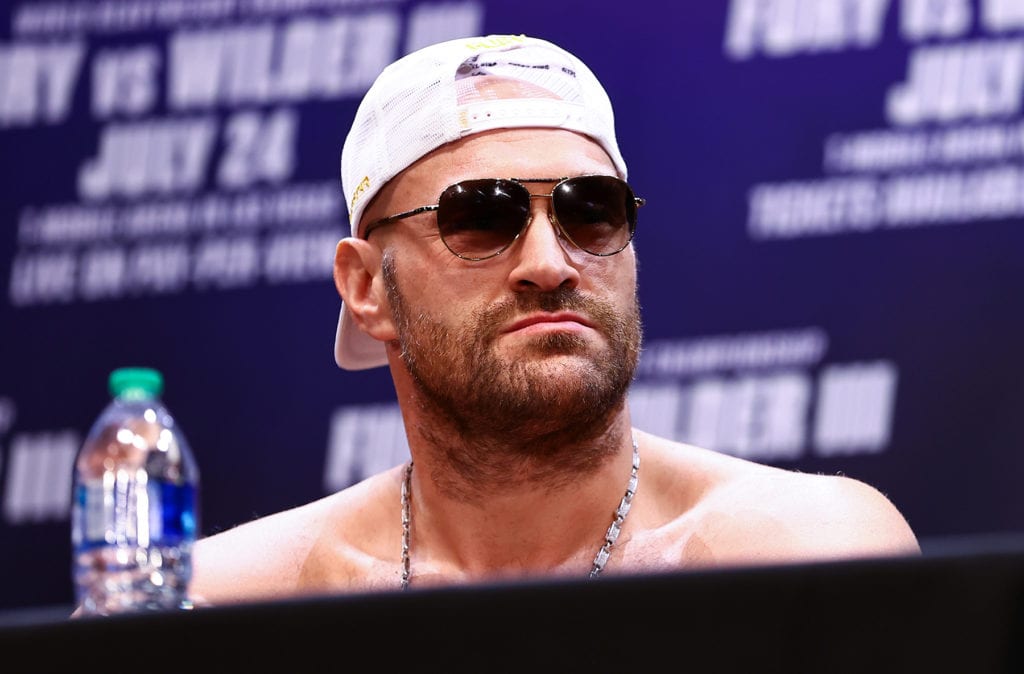 Tyson Fury and Deontay Wilder have unfinished business but for now, that is will have to take place after July 24th.

Multiple reports are out that Fury was among those who have tested positive for Covid-19 with at least seven other members of his camp. These positive tests have caused the third fight between the current and the former WBC Champions that was slated to take place July 24 in Las Vegas to be put on hold.

Dan Rafael was the first to report Thursday night that Fury was one  of the positive tests and most importantly, is symptomatic from the virus.

Multiple sources now confirming to me that #FuryWilder3 is postponed. https://t.co/L2F2Iii58J

We wrote earlier today about this development, as the bad news wa happening but the initial report from ESPN’s Mike Coppinger was to be blunt, vague and didn’t pinpoint who had Covid 19 to cause all the commotion.

John Fury, Tyson’s father, spoke Thursday evening that an unnamed sparring partner was responsible for bringing the virus into training camp. Who was it? doesn’t really matte, as the result of this pushes this fight back again to a later date.

Early rumors are that this fight would now be in October.

Lance Pugmire of the Athletic has been all over the open date and reports that would be October 9th would work for the T-Mobile Arena in Las Vegas, as Alanis Morrisette is performing prevously on the 2nd.

Yeah, I really do think.

The third fight between the two came together very quickly after Wilder and his lawyers successfully won an arbitration case in May to have the rematch clause from their February 2020 fight upheld. This scuttled the proposed Anthony Joshua – Fury Undisputed title fight that Matchroom Boxing promoter Eddie Hearn had been trying to peddle for the first four months of this year.

Fury, 30-0-1, 21 KOs, defeated Wilder, 42-1-1, 41 KOs, by seventh-round TKO in their matchup in Las Vegas and had originally intended to have their third fight last Summer. That is until the Covid-19 pandemic over took everything, including shutting down boxing for over 90 days. The aftermath, including not being able to have fans attend repeatedly delayed Fury-Wilder 3 from being able to happen deep into the fall.

Now, everything is on hold, while we await official word on the postponement and the re-schedule date.