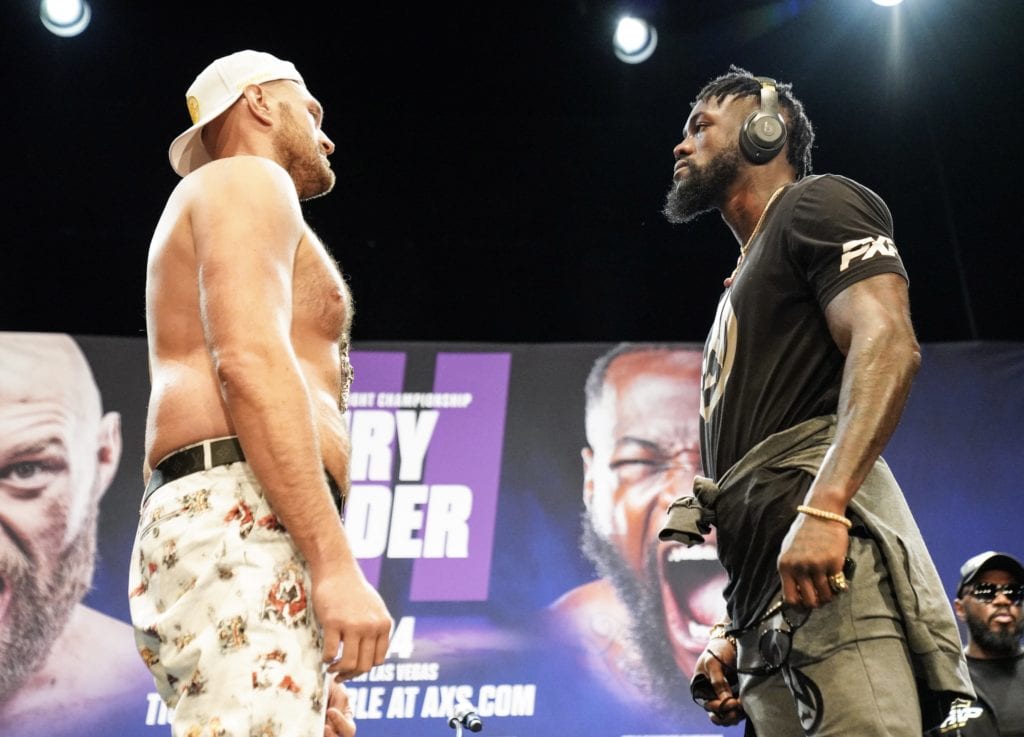 According to the joint press release,

“I wanted nothing more than to smash the ‘Big Dosser’ on July 24, but I guess the beating will have to wait,” Fury said. “Make no mistake, I will be back and better than ever. We will fight Oct. 9, and I will knock him spark out!”

“This is what we went to arbitration for,” said Shelly Finkel, Wilder’s manager. “He just wanted what was owed to him. He remains ready to reclaim his world title on Oct. 9.’’

The confirmation announcement came a day after Fury was out in public at Luxury Rental car dealership in Las Vegas, despite guidelines still in place for quarantining for at least 10 days after a positive test.

As we wrote Wednesday,  Las Vegas Exotic Cars put out the photo on Instagram thanking Fury for “stopping by,”

Fury allegedly tested positive for the Coronavirus last week (along with an unconfirmed number of members of his training camp in Las Vegas). However, he’s never publicly commented on, much less taken responsibility for, that having stopped the highly anticipated third fight with Wilder, by testing positive.

“The Gypsy King” posted on Instagram earlier Wednesday morning that he was grateful to the fans who had voted for him for the ESPN “ESPY” Award for top boxer of 2020. Those awards were given out on Sunday night in a New York ceremony and televised live on the network.

That was the first time he had surfaced publicly or online since the news of him allegedly being Covid 19 positive and supposedly on quarantine for 10 days per CDC, Covid-19 guidelines.

Fury was later seen, photographed and on a time stamped tweet, as having been in a Vegas casino taking pictures with fans, including this one,

The world CHAMP is in the building out here in Vegas! @Tyson_Fury pic.twitter.com/xejcRYbfIl

As we wrote last Thursday, Fury was deemed to be positive, and as boxing insider Dan Rafael reported at least three others in the camp were also positive and that Fury never received a second vaccination shot to help insure his immunity to the virus.

It further means that all of those positive should have been isolated, etc., and definitely not in public places without a mask/social distancing at least through the end of this week.

It also is fueling rumors that Fury wasn’t in great shape headed to the final two weeks of his camp and the July 24th date with Wilder and that the Covid-19 positive diagnosis may not be legitimate. However, that’s only speculation.

And, in the end, the fight will not happen this Summer, but rather in October.