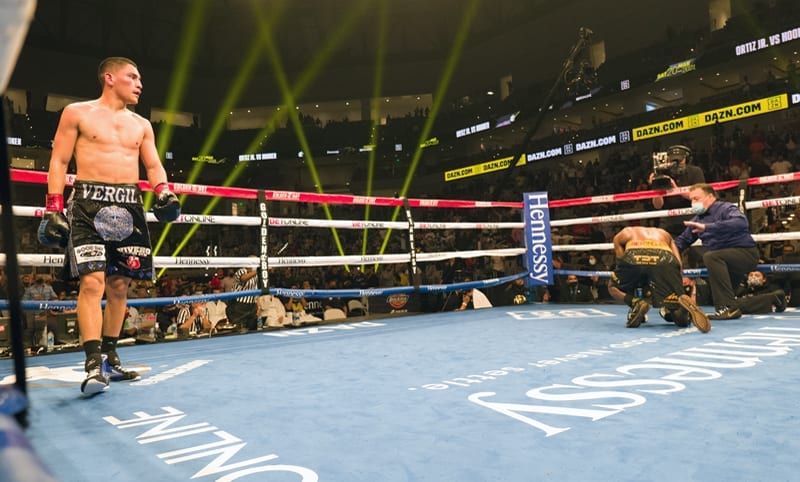 Rising, unbeaten Welterweight contender Vergil Ortiz is ready to step back in the ring next month and he’ll face a familiar, contending opponent in his quest to get a title shot.

This, as Golden Boy promotions made official Tuesday that the 23 year old Ortiz will take on Lithuanian contender, Egidijus “Mean Machine” Kavaliauskas on August 14th at the training home of the Dallas Cowboys in Frisco, TX,

🚨 AUGUST 14 🚨@VergilOrtiz vs Egidijus Kavaliauskas 🔥 live on @daznboxing at @thestarinfrisco in Frisco, TX.

The Dallas-Ft. Worth native is 17-0 with 17 straight KO’s to start his professional career. This includes him winning his toughest challenge to date back in March over former Jr. Welterweight World Champ, Maurice Hooker.

As we wrote then, Ortiz was impressive, although the veteran Hooker did hit him with some occasional big punches. Still, Ortiz got the better of Hooker scoring two different knockdowns, and stopping him in the 7th round in front of a partisan local crowd in Ft. Worth, TX.

Now, he will take on “Mean Machine” at “The Star,” where the Cowboys train during the season and where Golden Boy/Matchroom Boxing have staged fights previously.

“I always said I’m here to take on the toughest challenges to prove myself,” said Ortiz in the Golden Boy release. “Egis is a very game, strong opponent, and a win over him would leave no doubts that I’m ready for a world title fight immediately. It won’t be easy, but that’s the point. The fans are going to enjoy this one.”

For his part, the 32 year old Kavaliauskas (22-1-1) will pose a challenge to the young star Ortiz. The two time Lithuanian representative in the Olympics is best known for having given WBO World Champ, Terence Crawford, a tough battle in a 9th round TKO loss at Madison Square Garden in December of 2019. Not only did Kavaliauskas take some punishment, but he actually scored some on Crawford as the fight went on before being ultimately stopped.

His lone fight since then came, when he stopped Candian Mikael Zewski in the eighth round last September in the Top Rank Boxing Las Vegas “bubble.”

Fans been asking for this fight, and we’re going to give it to them,” said Kavaliauskas. “So, mark your calendar and have your popcorn ready. A war is coming.”

Tickets will go on sale Friday and Ortiz is expected to draw thousands of his regional fans for the bout.