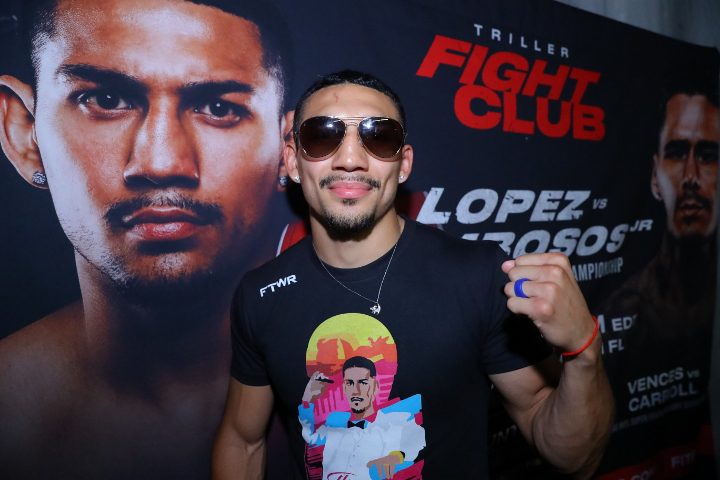 As expected, Lopez will move up to junior welterweight for the bout, which is likely to take place in South Florida, where New York native Lopez grew up and asked Top Rank to look at as a site, McWater said.

Lopez’s opponent is likely to be Pedro Camp, but McWater said the deal is not done yet.

“We were given an option of three opponents by Top Rank and we have not chosen one but Campa is the favorite,” McWater said. “(Top Rank matchmaker Brad) Goodman likes him, I like him. But there is no contract signed or anything. It’s probable.”

McWater said one of the other names he was given as a possible opponent was Sandor Martin (40-2, 13 KOs), a Spanish southpaw, who in October notched a massive upset via majority decision over former four-division titlist Mikey Garcia in October.

Lopez (16-1, 12 KOs), 24, will be fighting for the first time since losing his unified 135-pound belts to mandatory challenger George Kambosos Jr. by split decision on Nov. 27 at the Hulu Theater in New York. Kambosos knocked Lopez down in the first round and survived a knockdown in the 10th round in the action-packed fight of the year candidate and a massive upset.

Even before the loss, Lopez was likely to move up to 140 pounds and now he definitely will, McWater said.

“We haven’t gotten that far to set the exact weight, but it will probably 140. We’d like to try to get it as an eliminator,” McWater said. “We want it to have some meaning. That would be my hope but the exact weight is nothing that’s been agreed on.”

Lopez had arthroscopic surgery on his wrist and elbow earlier this year and has also had treatment for the asthma condition he has boxed his whole career with.

“He’s taken care of the injuries and he seems like he’s in a good place now,” McWater said. “He’s very focused. He wants to make a good showing. I think we will see the old Teofimo.”

Lopez, who represented his parents’ home country of Honduras in the 2016 Olympics, won a lightweight title by second-round knockout of Richard Commey in December 2019. He returned in October 2020 inside Top Rank’s bubble at the conference center of the MGM Grand in Las Vegas without fans due to the coronavirus pandemic and outpointed three-division champion Vasiliy Lomachenko in a major upset to unify three major titles.