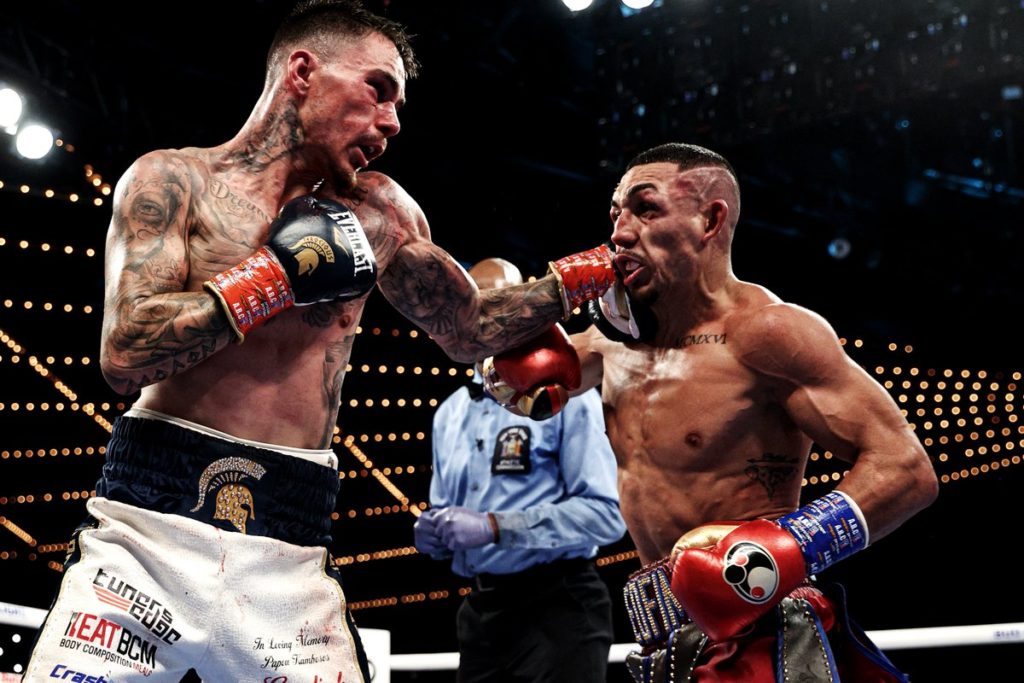 Judging In Kambosos-Lopez Was Erratic Again

Saturday night’s dramatic 12 round upset by Australian George Kambosos over Undisputed Lightweight Champ Teofimo Lopez was not without the all too familiar erratic judging that has almost become expected in world championship fights.

He clearly was the more effective puncher throughout the bout and turned the previously unbeaten Lopez’s face into a swollen bloody mess in the championship rounds.

Thus, sending the pro-Lopez crowd at the Hulu Theater adjacent to Madison Square Garden into a combination of gasps and cheering down the stretch.

Even though the final official verdict read- split decision win, it was still justified on volume of power punches landed (155-115 for Kambosos) and by the fact that he got off the canvas in the 10th, survived and still out fought Lopez at the end.

Once the cards became available to the media, the scrutiny showed irregularities, particularly by judge Connecticut based judge Don Trella,

While we all agree that judging is subjective and competent judges will see things differently at times, some parts of boxing scoring are “black and white.”

For example, Trella did not give the new champ a 10-8 edge in round one, despite Kambosos scoring a clean knockdown of Lopez with an overhand right. That violates one of the primary judging “creeds” that unless a fighter being dropped has clearly dominated a round- landing numerous more punches than their opponent that knockdown is not only the deciding factor but should be rewarded with a two punch margin.

This is exactly what Trella’s counterparts Glenn Feldman and Frank Lombardi did in giving Kambosos the 10-8 opening stanza.

For the record, that point was eventually the difference in Trella’s card not ending in a 113-113 draw.

Further, Trella also gave Lopez the second round, when he was clearly out-landed by the new champ and when Feldman and Lombardi did not (BFW agreed with the others on round two). So, instead of Kambosos rightfully being up 20-17 after two, Trella almost comically had the fight even, only 19-19.

Again, points add up and there was a whole fight to go, but still, this was crucial. This as eventually, Trella’s erratic math was part of what kept Kambosos from getting a unanimous decision.

Down the stretch the judges mostly agreed that Lopez was winning the late rounds, which included the 10-8 10th round, where Kambosos was hurt and potentially on the verge of being stopped.

All three judges got the 11th round right, as Kambosos was the aggressor, landed more, including a big left hook that stopped Lopez in his tracks. And, that round win put him over the top on the Feldman and Lombardi cards.

In the end, Kambosos got his hand raised in victory and that’s all that deservedly matters.

Still, the New York Athletic Commission and the world sanctioning bodies should still look at and discuss the Trella card with him.

This is because, subjective scoring has to be checked, when it doesn’t match up with the action in the ring and what your fellow judges have on their cards.

However, we won’t hold our breath.