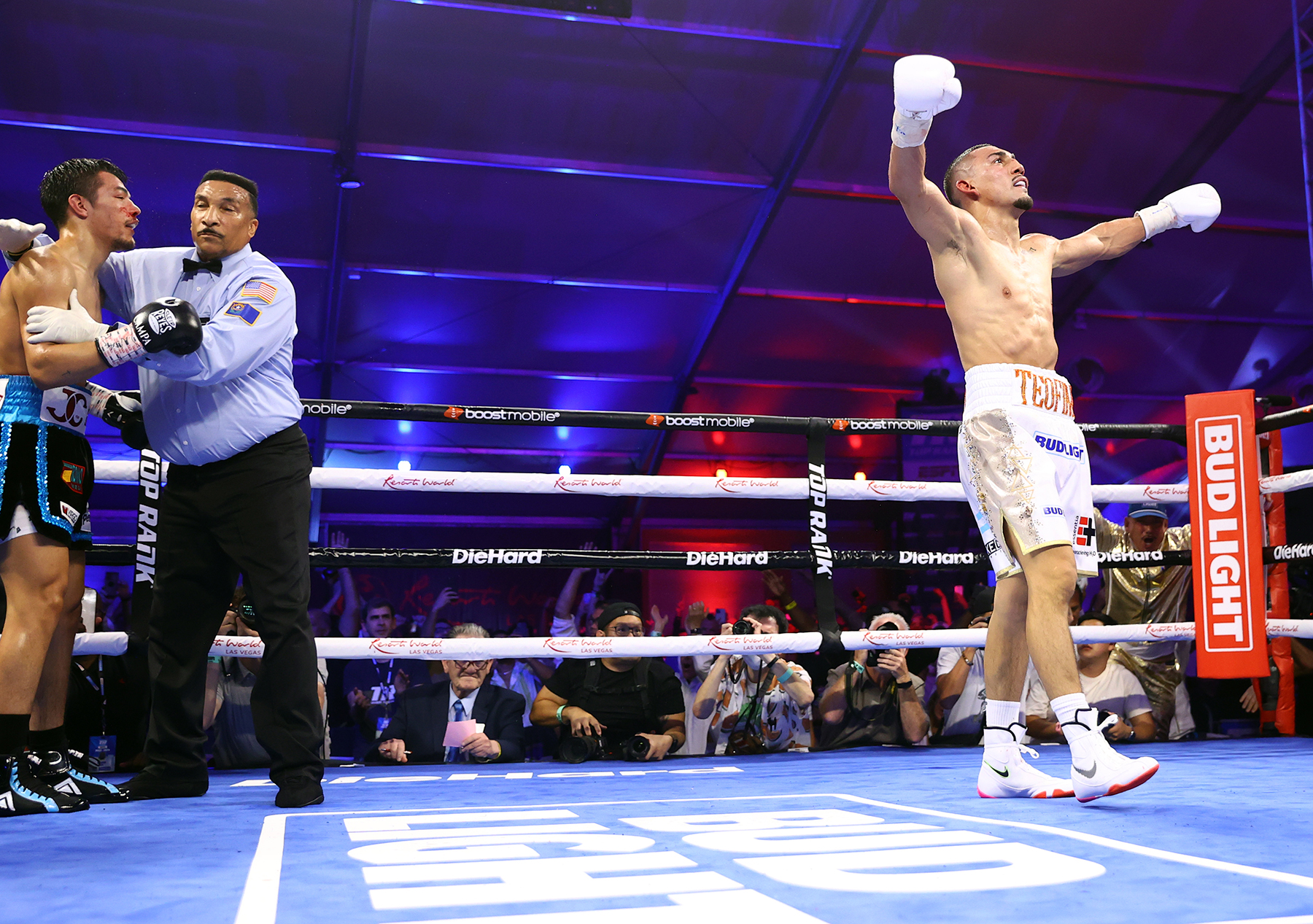 After a difficult nine months, and coming off his first professional loss, former unified lightweight world champion Teofimo Lopez made a dominant and triumphant ring return on Saturday night.

In his junior welterweight debut, Lopez dropped and stopped Pedro Campa in the seventh round of their scheduled 10-rounder in the Top Rank Boxing on ESPN main event before a sold-out crowd of 3,553 at Resorts Word in Las Vegas,

Lopez was fighting for the first time since losing the unified 135-pound world title in a massive upset to Australian mandatory challenger George Kambosos Jr. on Nov, 27 in New York in an action-packed fight of the year contender that saw Lopez get knocked down in the first round, suffer a bad cut and then drop Kambosos in the 10th round.

The fight, which was delayed for months, took a toll on Lopez, who wound up hospitalized due to a torn esophagus that he first developed shortly before the bout in a potentially life-threatening but undetected condition. He later had arthroscopic surgery on his wrist and elbow as well as treatment for the asthma condition he has boxed his whole career with.

But he put it all behind him with a strong performance in his first fight at 140 pounds against a determined Campa, who got in some solid shots but not nearly enough to slow down the faster, busier and more accurate Lopez.

“I don’t call this a comeback. This is ‘The Takeover’ takeover,” Lopez said soon after performing his usual post-victory back flip.

Lopez (17-1, 13 KOs), 25, of Las Vegas, used his jab well, landed many power shots and generally had his way with the aggressive Campa, who was taking a major step up in opposition.

“Teofimo proved tonight that he is going to be a force to be reckoned with at 140 pounds,” Top Rank promoter Bob Arum said. “There are many incredible fights to be made in that weight class. The future is very bright for one of the sport’s most talented fighters.”

Lopez landed his first big shot in the third round when he rocked Campa with an overhand right early in the round. He closed the fourth round by landing a flurry of shots. By the end of the sixth round Campa’s left eye was swollen.

Moments into the seventh round, Lopez tagged Campa with a quick right hand and then a stiff jab he never saw that dropped him to his rear end. He got up with a bloody nose and Lopez went after him. He eventually unloaded on Campa, connecting with several punches, including three short, chopping right hands to the head that rocked him and caused referee Tony Weeks to step in at 2 minutes, 14 seconds.

Soon after the bout, talk turned to what is next for Lopez, whose goal is win a title in a second weight class now that he is at 140.

“We’ve been at 135 pounds for about nine years. It was killing my body, since I was a teenage kid, man. I just turned 25,” Lopez said of moving up in weight.

Then he named names.

“We want (world champion) Josh Taylor. We want these guys. We want (former titlist Regis) Prograis. We want (top contender Jose) Zepeda. We want all the belts. That’s what we want. We want to become two-time world champion.”

There is also the prospect of a fight with star Ryan Garcia, who moved up to junior welterweight in his last fight on July 16. His promoter, Golden Boy CEO Oscar De La Hoya, was ringside to observe Lopez, whom he calls a friend.

De La Hoya and Arum are interested matching Lopez and Garcia, which would be a highly significant fight with or without a world title at stake.

“I want to explore all options. Why not,” said De La Hoya, who also is trying to make a fight between Garcia and Gervonta “Tank” Davis.

When asked about a fight with Garcia, Lopez gave a pointed response.

“If Josh Taylor is too busy with his wedding and there’s nobody else around because the WBA belt is taken and the (vacant) WBC (title) is going to be fought with Zepeda and Prograis, then so fucking be it.

“I’ll take all them boys and take their whole dreams away. I’m here to be their nightmare.”

Lopez likely will return to headline another ESPN card on Dec. 10 following the Heisman Trophy presentation, also on ESPN. That is a slot in which Lopez has regularly fought.

Lopez said his fight would headline a pay-per-view card that night, but according to Top Rank, the company has the linear television window on Dec. 10 with UFC, also an ESPN partner, going on pay-per-view.

Whomever Lopez fights, and on whichever platform the bout is on, he was pumped to be reborn in a new weight class that is stocked with quality potential opponents.

“Let’s get it baby! I’m ready to show all these boys they all man made,” Lopez said. “Teofimo is self made. They can never make another one.”