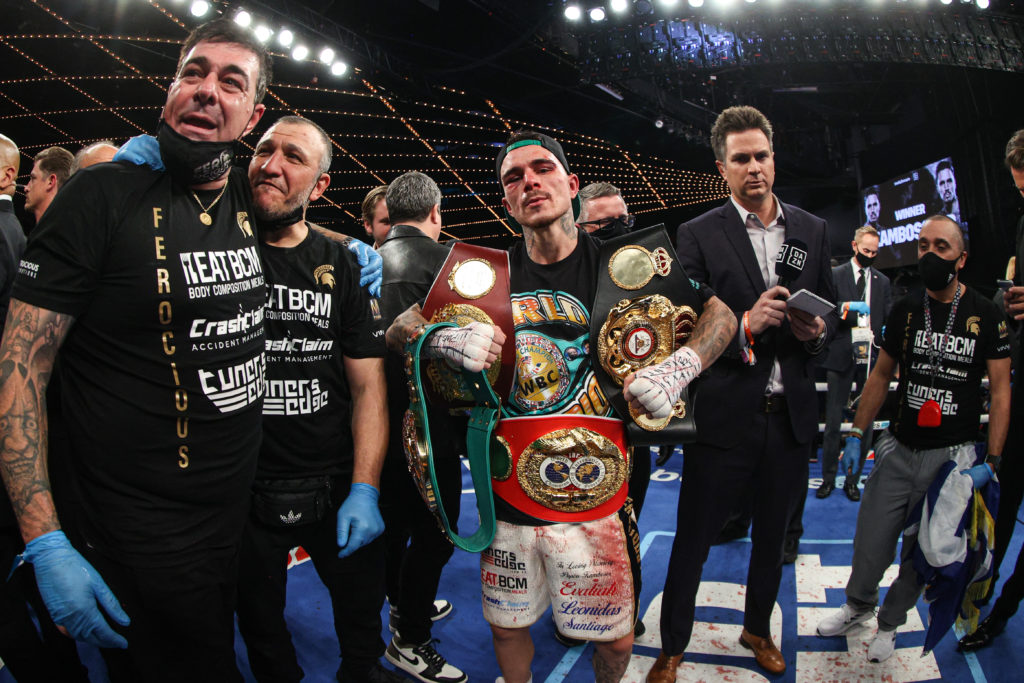 A fight that has been rescheduled nine times finally resulted, at the end of Teofimo Lopez’s title reign as George Kambosos Jr. wins by split decision to close out the Hulu Theatre at Madison Square Garden Saturday night.

The official scorecards in this one were 114-113 for Lopez overruled by 115-111, 115-112 in favor of Kambosos to pull off the biggest upset in boxing this year. The main event that aired on the streaming service DAZN was the undisputed maiden defense for Lopez since defeating Vasiliy Lomachenko in October 2020.

The opening bell of this contest saw Teofimo Lopez swing for the fences early as expected.  The build-up leading into this fight is the genuine hatred that both fighters have for each other. Lopez was looking to land on Kambosos with the right exclusively as the first round but was countered by Kambosos with an overhand right and sent down the champ for the canvas as the first round ended.

The second round was calmer as the hometown crowd looked to root behind the Brooklyn-native Lopez. The difference in size that Kambosos gave up on Lopez didn’t matter as he was taking the fight to Lopez through the battle. Lopez had the best success at this point as the end of the third round closed out. Kambosos came into this fight the massive underdog in this fight but was more than game in this one and was still able to time Lopez up with a jab. At this point as well, the swelling under Lopez’s right eye as the Kambosos jab was giving him issues.

As the end of the fifth round ended, those watching the fight wondered how was Kambosos, at as much as a 15-1 underdog, still in the contest and may have been winning the bout? Part was the output from the undisputed champion Lopez just wasn’t there and he was getting outboxed, having to chase down Kambosos. As the end of the sixth round closed out, a small cut formed in Kambosos’ upper right eye.

The game plan for Kambosos was to stick the jab and then a shot behind it, and he was doing this quite often while Lopez wasn’t able to get anything going. Lopez, on the broadcast, was seen slumping over into his corner stool, showing his frustration at what was going on in the ring. It was more of the same peppering as the eight-round closed, but a spirited exchange between the two looked that Lopez got the better end of it.

The crowd that was somewhat stunned at what they were watching came alive in the ninth, and Lopez had his best moment in the fight as he was able to land a hard shot on Kambosos that had him staggered as the round closed out. In the tenth round, Kambosos was sent down with a short right hand, and this was when the momentum changed in the fight in favor of Lopez. Kambosos was able to beat the ten count of referee Harvey Dock and the war pressed on.

In the eleventh round, a cut above the left eye of Lopez started to open up and was the target for Kambosos as it was giving him problems. These were the last two rounds that very well could have determined the fight. Both of those rounds seemed to go in favor of Kambosos as we have a new champion at lightweight.

“Have I changed all week? Have I change my whole career? Never. I believed in myself….look at me now I’ve got all the jewels (belts). I’m not a king… I’m the emperor. I have all the titles,” Kambosos told DAZN post fight.

It’s one of the greatest upsets in the history of Australian boxing, as Kambosos came to the United States, in Lopez’s hometown of New York and out-slugged the previously unbeaten champ to become to king at 135 lb.