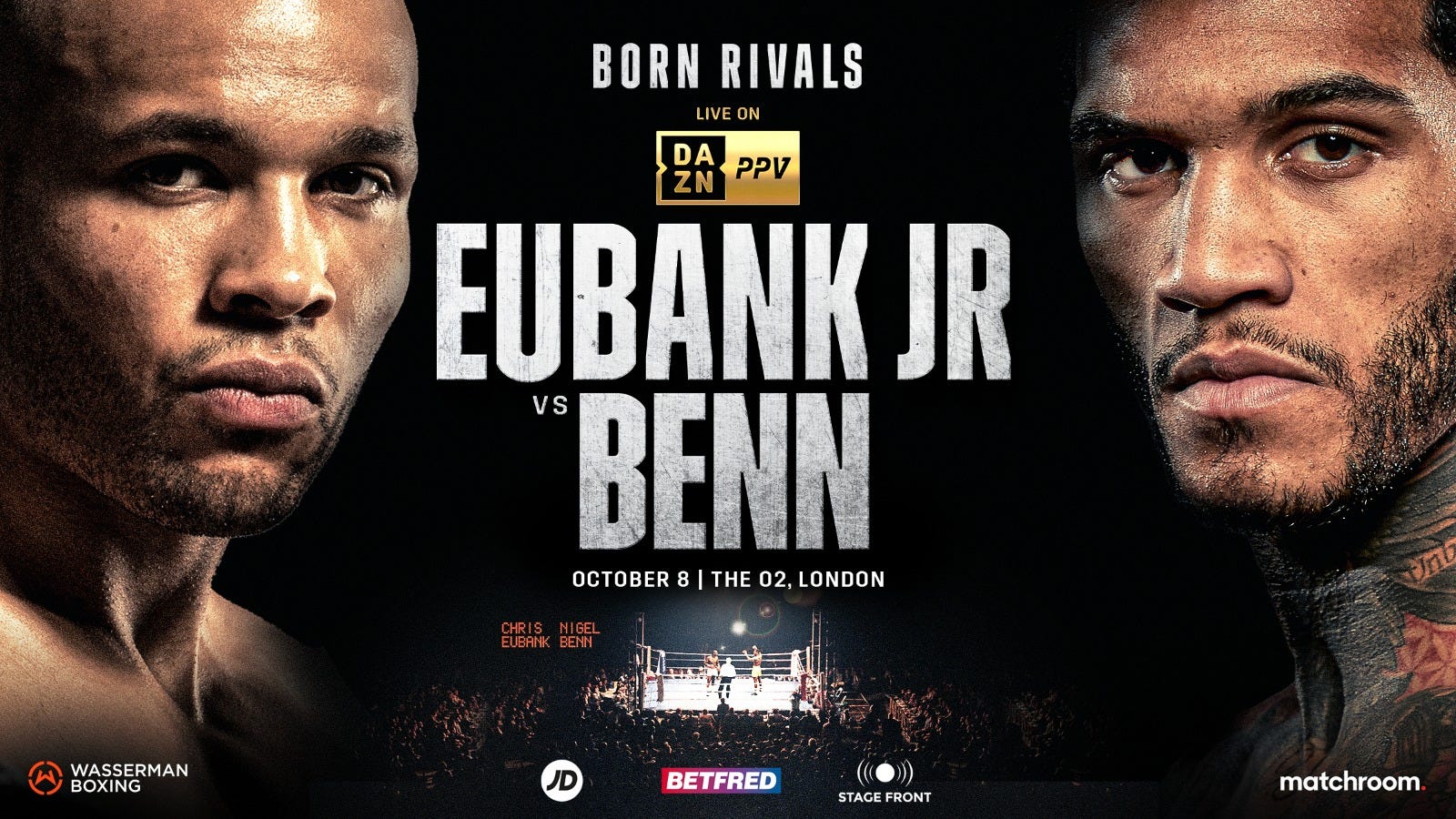 Saturday morning saw tickets go on sale in the U.K. for upcoming anticipated October matchup at London’s O2 arena for popular British fighters Conor Benn and Chris Eubank Jr. And, in sign of demand, but also strategy, the tickets were gone almost before you say Benn-Eubank.

Matchroom Boxing quickly and proudly made the announcement on social media that all tickets available had all been purchased for the October 8th bout,

Don't miss all the action live on @DAZNBoxing PPV 👊 pic.twitter.com/GDEhSflZr9

More on the “sellout” of tickets in a moment. First, our Dan Rafael wrote previously about the matchup that re-kindles a family rivalry from 30 years ago,

“The fight, dubbed “Born Rivals,” will stream on DAZN around the world but it will be a DAZN PPV event in the United Kingdom and Ireland.

“I can’t quite believe this is happening but let me tell you, it’s happening,” Eddie Hearn said. “Weeks of negotiations have led to one of the biggest moments in British boxing. These two ‘Born Rivals’ will do battle in an epic match up that has absolutely everything. Ever since they both turned professional people talked about this moment and now is the time to see the historic rivalry continue.”

Eubank (32-2, 23 KOs), 32, who is trained by Hall of Famer Roy Jones Jr., has been in other notable fights, having held an interim middleweight belt and challenged for a super middleweight world title in a decision loss to countryman George Groves in 2018. Eubank has beaten former titleholders Arthur Abraham and James DeGale, contender Matt Korobov and most recently outpointed Liam Williams in February. His only other loss was a split decision to Billy Joe Saunders for the European, British and Commonwealth middleweight titles in 2014. Since the loss to Groves, Eubank has won six fights in a row.

Benn (21-0, 14 KOs), 25, is the fighter on the rise and a growing attraction in the U.K. who has stepped up his competition over the past two years with eye-catching knockouts of Samuel Vargas, former junior welterweight titlist Chris Algieri and Chris van Heerden and a one-sided decision over Adrian Granados.

But Benn is taking a tremendous gamble against the much bigger and more experienced Eubank. But he felt it was worth the risk.”

Rafael has reported further that the fight will be at the “catchweight” limit of 157 lb.

As for the tickets being “sold out” in a minute or so, this is something that Matchroom has done in the past with allowing a third-party, ticket outlet like Stubhub U.K. to purchase most or all the tickets immediately.

They did this previously with the unified heavyweight title fight for Anthony Joshua-Oleksandr Usyk at Tottenham Hotspur Stadium in London last September.

That fight “sold out” within hours on the same day due to Stubhub getting most or all of the over 60,000 seat inventory for that bout that Usyk won by decision.

And a quick check of Stubhub U.K. Saturday morning did show thousands of tickets available all over the O2 Arena for October 8th.