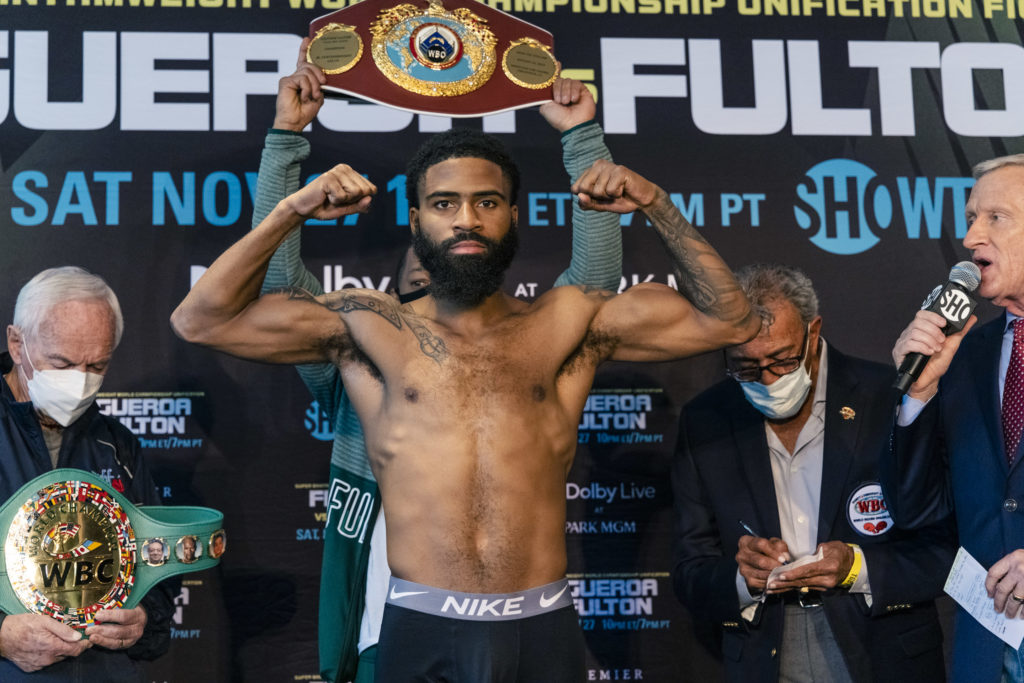 Coming up tonight in Las Vegas it’s a battle of unbeatens for the Unified Super Bantamweight world title as Philadelphia’s Stephen Fulton takes on Texan Brandon Figueroa in a highly anticipated 12 round showdown. And, for Fulton it’s obviously a huge moment on the largest stage he’s been on to date.

The fighters weighed in under the 122 lb. limit on Friday afternoon,

My resume is better [than Figueroa’s] and I feel comfortable saying that. I’ve taken risks since the beginning of my career. I’ve faced undefeated fighters that no one wanted to face. I’ve taken the harder road to get to this fight,” Fulton told the media in Vegas on Wednesday.

I’m his biggest fight to date. I’m his biggest test. I’m not like any of the other fighters that he faced before. He knows that and everyone around him knows that. Just watch what I do when I have my back against the wall.

“I already know that I’m the top guy at 122-pounds. It’s just a matter of days until everyone will see that.”

Checkout our thoughts on Fulton vs. Figueroa on our latest “Big Fight Weekend” podcast as Marquis Johns joined me. Hear us by clicking below:

Fulton captured his WBO title and improved to 19-0 with 8 KOs, by scoring a unanimous 12 round decision over previously unbeaten Angelo Leo in January. Fulton was particularly sharp and only lost a couple of rounds total on the three judges cards. This included one stretch in the middle rounds, where Fulton was averaging 35 or more landed power punches per round.

“Figueroa is going to engage with me more than most of my past opponents have. Him fighting with the style he likes to use is going to bring out more of what I can do.”

Now, we’re about to see if Fulton can deliver with power against a fighter that won’t be bashful about standing toe to toe with him with everything riding on the line for both.