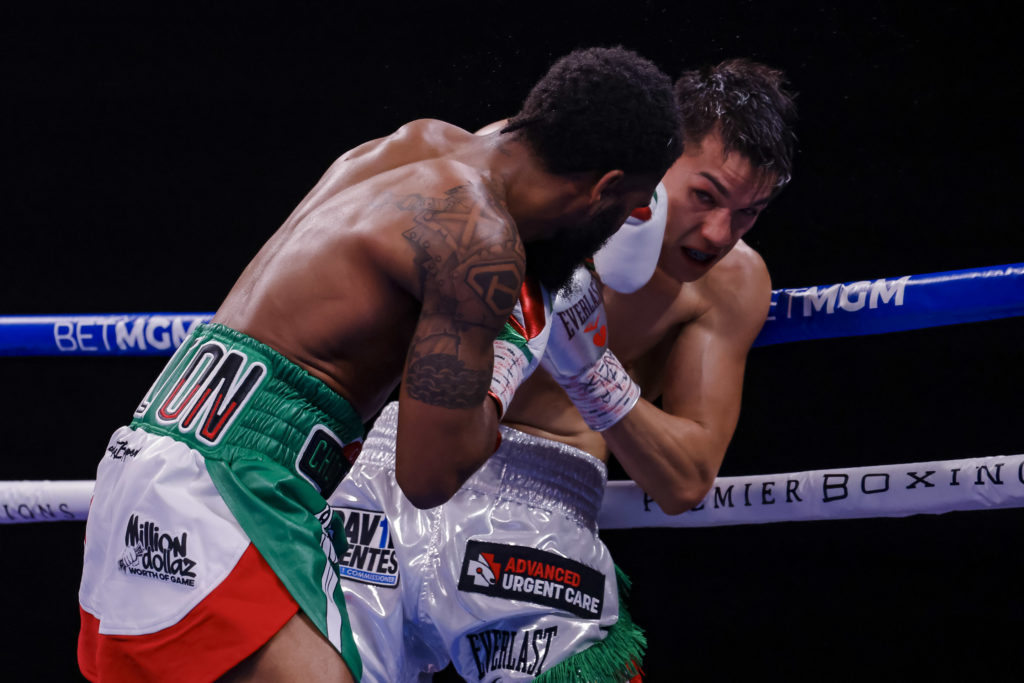 The official scorecards for this fight were 114-114; even that was overruled by 116-112 x 2 in favor of Fulton in a close phone booth fight for thirty-six minutes.

The main event that aired on Showtime shaped up to be a good one and was just that as the action picked up in the second round of this fight as both went at it inside. As the third round pressed on, it was clear that Fulton was looking to land off the right, and Figueroa would keep Fulton away in range.  This worked to his advantage towards the end of the round as Figueroa kept Fulton on the ropes.

The same game plan continued in the fourth round as both were trading back and forth. Both fighters were willing to trade on the inside for most of the fight and made for a close battle and great action. Figueroa stayed on the outside, and Fulton, now 20-0, 8 KOs, was looking to throw from the inside. Both fighters, after six rounds, were in excellent condition as both still were trading back and forth in a phone booth fight.

As the second half of the fight started, that biggest question to those watching the fight was could Fulton continue this physical style for the rest of the battle. One specific thing was that Figueroa, now 22-1-1, was going to bring the battle to Stephen Fulton. Close contest and one moment that could’ve swung the war was for naught as a knockdown of Fulton was ruled a slip.

The toe-to-toe action continued through the ninth, and this was what we expected as Figuroa mentioned as much leading up to the fight—made for not only close rounds but tough ones to score for either fighter. The Showtime broadcast and unofficial score judge Steve Farhood had it even, and that was the general thought to those watching in real-time.

In the tenth round, Figueroa changed the pace of the fight as he caught Fulton with a shot that caught his attention and buzzed him for a moment. Fulton escaped the onslaught from Brandon Figueroa, and the war pressed on into the championship rounds. The same frantic action pressed on into the final game in what will certainly make everyone’s “Fight of The Year” bucket for 2021.

“This was a war. A tough fight. He’s a tough person,” Fulton told Showtime post-fight. “I was catching him in between the shots he was throwing. He was more active but who was landing more, cleaner shots?”

In the end, two of three judges agreed.

With the win for Fulton, the next challenger is shaping up to be Ra’esse Aleem, who was victorious in the co-main event of this bout card by Eduardo Baez by majority decision. That will be a tough contest but this one that closed out Las Vegas Saturday night was just as tricky for Fulton and Figueroa in this unification bout.