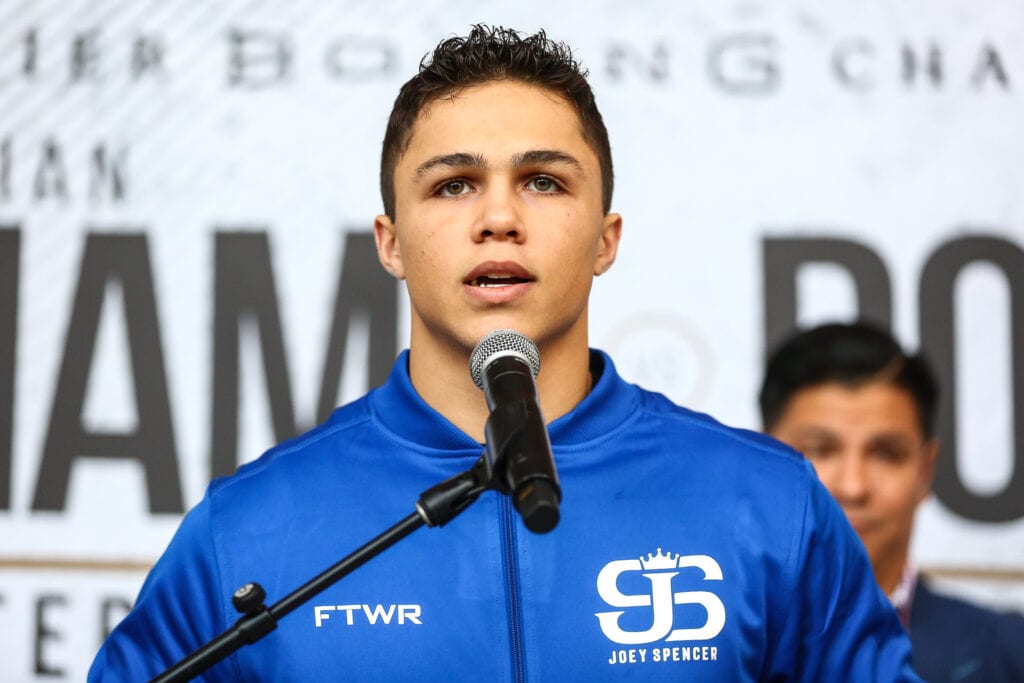 In the FOX PBC Fight Night opener, top super welterweight prospect Joey Spencer (10-0, 7 KOs) remained unbeaten with a unanimous decision over Erik Spring (13-4-2, 1 KO) after six rounds of uneventful action. This fight opened up the Fox card that led to the homecoming upset of Julian Williams by Jeison Rosario to crown a new unified champion at Super Welterweight.

Fighting from the southpaw stance, Spring looked to land big overhand lefts but was rarely able to catch up to the speedy 19-year-old Spencer. Spencer dominated the action with his speed and by landing big hooks throughout the action.

“I was in there with a cagey, long southpaw,” said Spencer. “To be honest, when a guy is fighting as cagey as he was, it’s really hard for a guy with my style to just pull something out of nothing. He was a real defensive guy.”

Spencer was especially effective sneaking a powerful left hook around Spring’s guard. Spring tried to press the action in the later rounds and force a firefight but Spencer remained patient and picked his spots. Late in round six, a left hook from Spencer sent Spring flying into the ropes, before he was saved from the follow up onslaught by the bell.

“At the end I really just pressed him, said I’m going to finish strong, and hit him with some good shots,” said Spencer. “If I had done that in the first or second round, I would have ended it early. I’m glad to get the six rounds in. Experience is everything. You’re only as good as your next fight. I’m happy to get in there and get some good experience and I did my thing and got the shutout.”

“I was waiting too much,” said Spring. “I thought he would come in and engage more and I was looking counter him but he stayed on the outside. I was more impressed by his speed then his power. He’s a talented fighter but I could have been more effective.”

After six rounds, all three judges saw the fight for Spencer, by a score of 60-54 three times. PBC’s 2019 Prospect of the Year, Spencer will look for another big year in 2020.

“I’m going to stay busy this year,” said Spencer. “I’m going to have a four-fight year. This is one of four. We’re looking to bring some excitement and have some fun.”