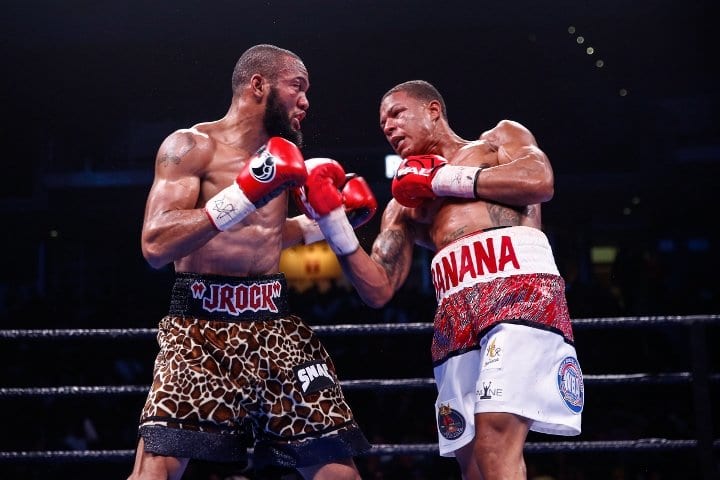 Julian Williams came in with the WBA, IBF, and IBO Super Welterweight titles as the heavy favorite in his homecoming bout at the Liacouras Center in Philadephia. But, after five rounds, “J Rock” lost in an upset to Jeison Rosario.

In his first fight back in his hometown Philadephia since 2011, the bout was the main event of Premier Boxing Champions that aired on Fox.

The fight started with Williams looking sharp early on. Landing his jab with ease and was able to keep Rosario away in the opening round. All of that momentum changed when in the second round, Rosario landed a right jab that opened up the eyelid of Williams. Williams spent from that moment on pawing at it, as it was bothering him in the fight.

From there, the previously little known Rosario, now 20-1-1, began to take over the fight, targeting the eye of Williams that was opened up. In the fifth round, Williams was hurt by a hard hook, which then had him holding on dear life. He was thrown to the ground in what was ruled a slip, but when he got up, he was visibly hurt from the shot.

The fighter who had upset Jarret Hurd last May for the WBA and IBF belts was clearly in danger. And, Rosario came in to end the fight and did just that landing two hard shots that had Williams reeling and in trouble. That’s when referee Benjy Esteves Jr. had seen enough and called the one over, crowing Rosario the new champion at 1:37 in round five.

The hometown crowd voiced their displeasure by throwing objects into the ring., something that blows by blow man, Brian Kenny was apart of last month out in Phoenix.

“It blurred my vision, but that wasn’t the reason, he was a better fighter tonight,” Williams said after the fight speaking about the cut.

Williams, 27-2-1, said that there is a rematch clause and will review the tape before deciding on re-challenging Rosario. Ironically, this loss for Williams is the second one similar to his only other defeat against Jermall Charlo back in 2016 was also a stoppage in the same fifth round.

The victory for Rosario, much like his nickname, was “Bananas.”