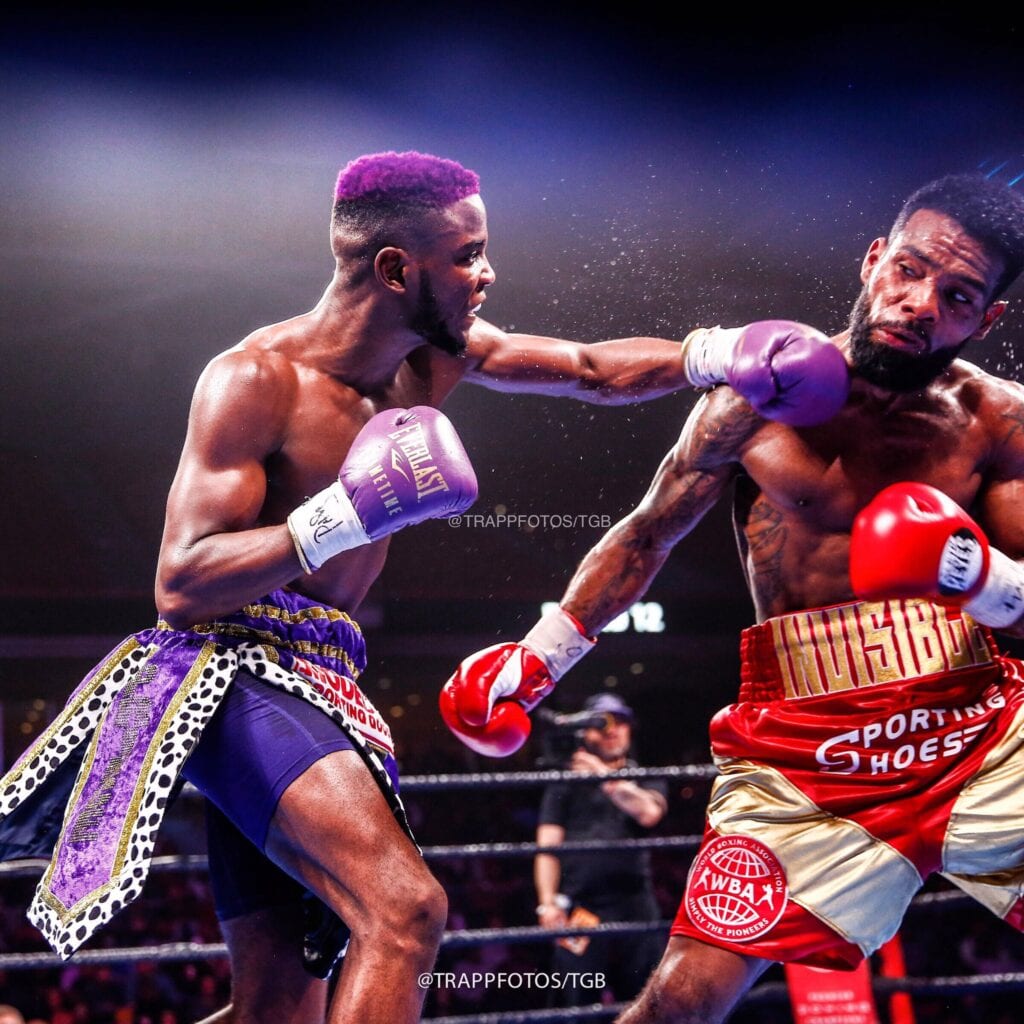 In the co-main event on Saturday night, rising star Chris “Prime Time” Colbert (14-0, 5 KOs) dropped former champion Jezreel Corrales (23-4, 9 KOs) on his way to a unanimous decision victory that earned him the Interim WBA Super Featherweight Title. This bout that aired on Fox led into the main event upset of Julian Williams by Jeison Rosario to champion a new unified champion at 154.

“He is a great fighter,” said Colbert. “People don’t realize that, because he had a bad decision against Ladarius Miller. But he’s a great fighter. He’s very awkward. He’s slick and fast. It was hard to catch him because he was running, but he came to fight. I take my hat off to him.”

The action began tactically, with Colbert trying to figure out the awkward style of the veteran former champion Corrales. Colbert switched from orthodox to southpaw and was able to control the early action despite a slow pace. The pace was slow enough to the point, the broadcast hinted at it and there was a smattering of boos at the Liacouras Center in Philadephia.

"The boos are picking up" – Kenny.

“I did my job in there,” said Corrales. “My strategy was to hit and not get hit. I felt like I made him struggle for a lot of the fight. The knockdown wasn’t from being hurt, it was my balance. Our feet got tangled and I lost my balance. I came in here to win. We both did our jobs, but the judges scored his pushing more than his punching.”I

Colbert continued to vary up his attack as the fight went on, while Corrales was able to have some success in the middle rounds landing straight lefts to counter his attacking opponent. In round 10 Colbert began to pull away, landing a clean left hook followed by a right hook to the top of the head that put Corrales on a knee.

“I had confidence coming into the fight,” said Colbert. “I knew I was going to dominate the fight and I told you all that before the fight happened. He was running and I was trying to catch him, so I told my corner, let’s have a dog fight. We got 12 rounds. I’m in shape. You see, I didn’t sit down one round. I’m in shape and I came to fight. I wasn’t going to leave without this title.

The 23-year-old from Brooklyn seemed to get stronger as the fight went on and finished the championship rounds impressively, staggering Corrales in the waning moments of the fight to punctuate the performance. Colbert was the victor on all three judges’ cards, by scores of 117-110 twice and 116-111.

“The strategy was to use my jab like I did and try to set up my punches,” said Colbert. “But he’s very awkward and has good distance. Slowly but surely I decided to stop boxing, close the distance and get on him. I knew he couldn’t out throw me, I’m from Brooklyn.”

Spencer defeats Spring to remain undefeated
Fury says boxing career is three and out
Advertisement
To Top
We use cookies to ensure that we give you the best experience on our website. If you continue to use this site we will assume that you are happy with it.Ok