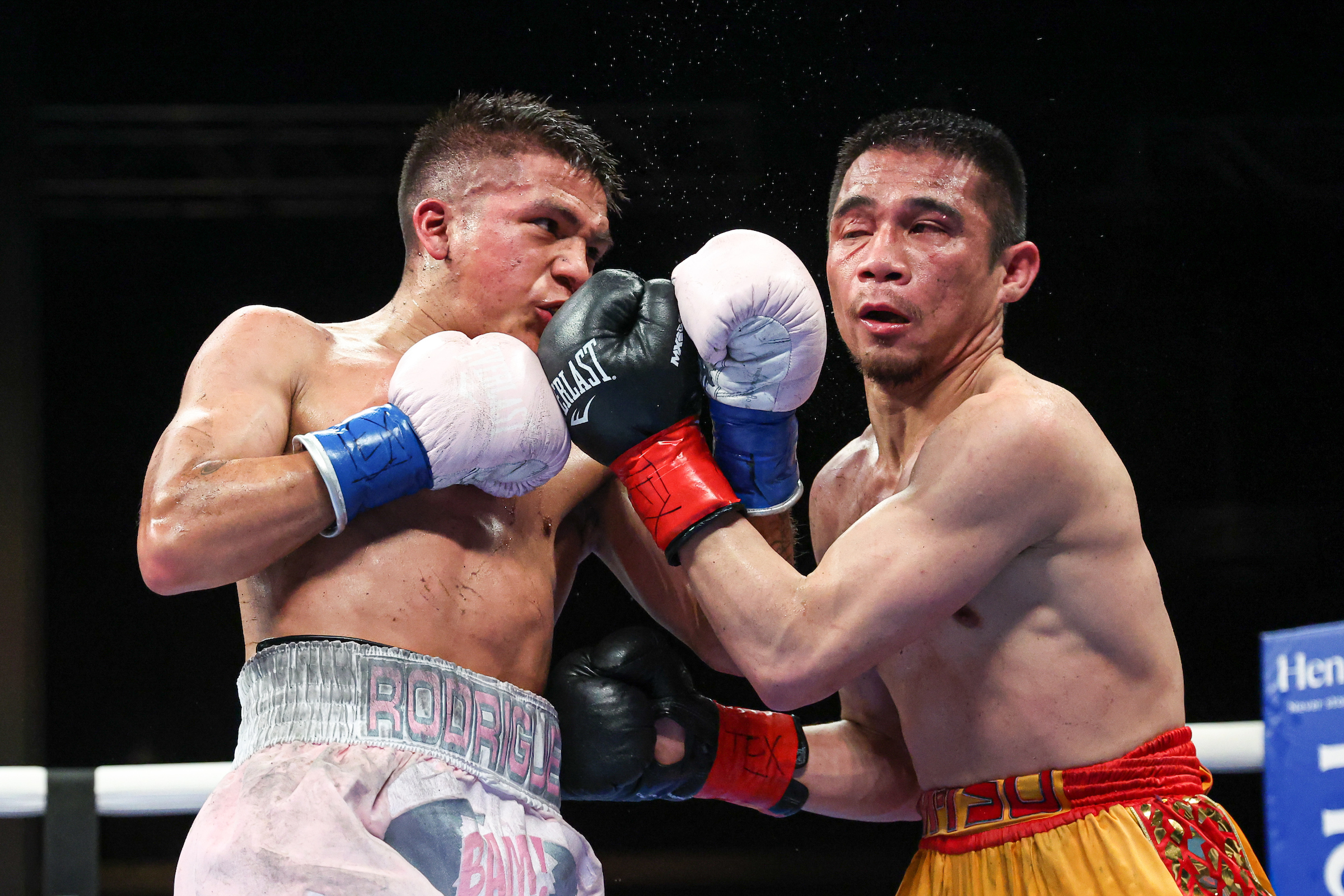 In an overwhelmingly dominant performance, Jesse “Bam” Rodriguez looked every bit the star he and many others believe he can be as he retained the WBC junior bantamweight title in his first defense.

“My skills proved a point tonight,” Rodriguez said. “I told everybody I was trying to be a special fighter and I proved that tonight. We know what I’m capable of and that’s why we took this fight in the first place. We knew what I brought to the table and tonight I showed that.”

Rodriguez, boxing’s youngest active world titleholder at age 22, never allowed the hard-punching Sor Rungvisai to get into the fight. He controlled the bout from the opening bell as he outboxed and out-punched the slower Sor Rungvisai. He pelted him with clean shots from both hands, landed many powerful jabs and steadily broke the former pound-for-pound entrant down to continue what has been a whirlwind few months.

“San Antonio, you got a superstar on your hands,” Matchroom Boxing promoter Eddie Hearn said. “These kinds of fighters only come along once in a generation. We live in a world of hype but it’s hard not to get too excited. This is the youngest world champion in boxing and already might be a pound-for-pound great. From 108 pounds to 115 pounds, honestly, I don’t think I would back any fighter to beat him. I’m talking about some of the greats, Chocolatito (Roman Gonzalez and Juan Francisco) Estrada. Would you put those guys as a favorite against ‘Bam’ Rodriguez?”

On Feb. 5, in Phoenix, Rodriguez dropped and handily outpointed former titleholder Carlos Cuadras to win the vacant WBC 115-pound title to become boxing’s youngest titlist as well as the first world titleholder born in the 2000s.

Cuadras had been scheduled to face Sor Rungvisai, but when he came down with Covid-19 and dropped out of the fight, Rodriguez, who was due to fight in a flyweight bout on the undercard, accepted an offer to move up in weight and face Cuadras for the belt on six days’ notice.

For his first defense he faced the now-healthy Sor Rungvisai, a borderline Hall of Famer with two victories over the legendary Roman “Chocolatito” Gonzalez – and a 2014 title loss to Cuadras — with whom he formed the four horseman of the division for the past several years along Juan Francisco Estrada.

But Sor Rungvisai (50-6-1, 43 KOs), 35, a southpaw from Thailand, has slowed down in recent years and was coming off a 15-month layoff. Still, his power figured to be an asset but he could never land anything meaningful against Rodriguez, who was determined not to stand in front of him and make it a slugfest.

“I grew up watching these guys, so to be in the ring with them is just a privilege. But to beat them the way I’ve been beating them, it means everything to me and my team and we couldn’t be more than happy,” Rodriguez said.

While Sor Rungvisai plowed forward looking to land heavy shots, Rodriguez snapped off hard jabs and combinations and used his considerable speed advantage to avoid the big shots that Sor Rungvisai threw mostly just one at a time.

Rodriguez (16-0, 11 KOs) landed a hard right hand an uppercut in the third round, which is when Rodriguez said he felt like he had taken control.

Rodriguez continued with his two-handed attack and it was clear Sor Rungvisai was beginning to wilt. Rodriguez had a big sixth round, hurt him with a body shot and an uppercut in the seventh round and then nailed him with a left hand to the temple that rocked Sor Rungvisai and forced him to touch both of his gloves to the mat for a knockdown.

“I started using my angles more. (Trainer) Robert (Garcia) kept reminding me to use my angles and that’s what I did. I stepped to my right and threw my left shot and he went down,” Rodriguez said.

In the eighth round, Rodriguez pounded Sor Rungvisai with a relentless attack. He eventually sent him into the ropes and as he continued to unload unanswered punches, referee Mark Calo-oy intervened at 1 minute, 50 seconds.

According to CompuBox statistics, Rodriguez landed 233 of 431 punches (54 percent) – an extremely high percentage – and Sor Rungvisai landed only 84 of 440 (20 percent). Rodriguez outlanded him in every round.
Rodriguez is in a great position now. He has a world title at junior bantamweight but reiterated that he would go down to flyweight or junior flyweight for the right fight.

“I’m down to do whatever Robert says,” Rodriguez said. “Any champion at 112. Come and get it. I’m here. I’m here to stay. I’m a special fighter not an average fighter.”

Hearn believes more big fights and performances are ahead for Rodriguez and it is hard to think otherwise.

“He can go down to 108, he can go to 112, but literally there’s not one fighter I would put to Robert Garcia or Jesse Rodriguez that they wouldn’t accept a challenge against,” Hearn said. “Like this young man says, he’s here to be a great. He’s here for legacy, he’s here to be remembered, and San Antonio should be very proud of Jesse Rodriguez.

“There’s a long career ahead. Very young guy, but all the ability to be a pound-for-pound great.”