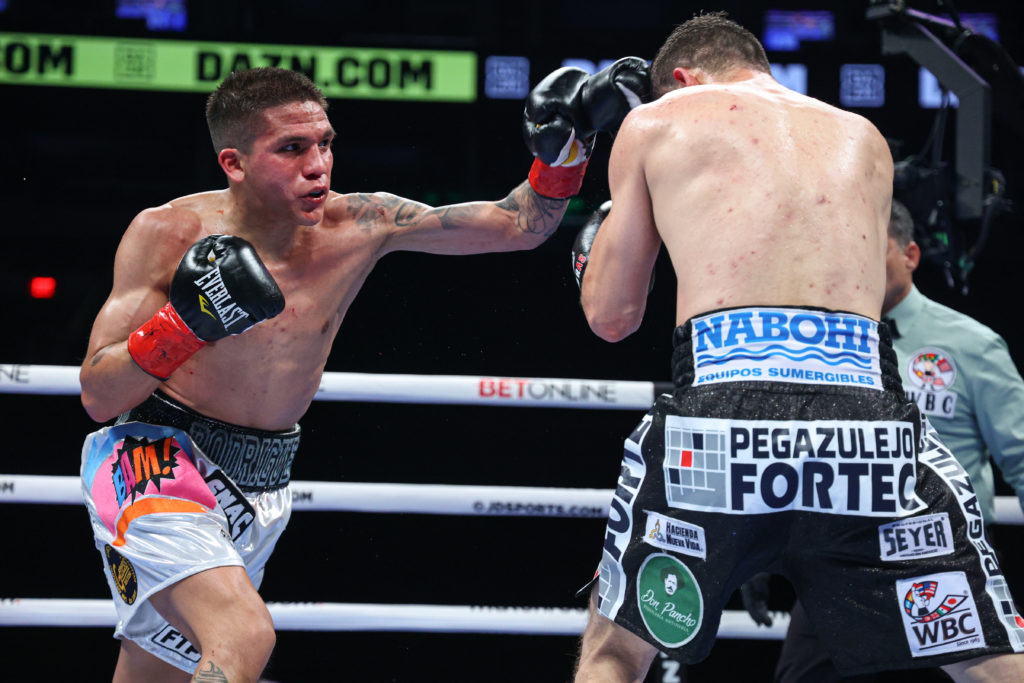 Just over a week ago, 22 year old Jesse Rodgiguez was slated to fight on the undercard of the WBC Super Flyweight main event. Well, on Saturday night, the fighter known as “Bam” made the most of a late opportunity to fight in the main event and dominated veteran Carlos Cuadras in a 12 round unanimous decision to become the champ.

Rodriguez floored Cuadras with a right uppercut and outfought him in the championship rounds on his way to a 117-110 x 2 and 115-112 victory,

The WBC World Super-Flyweight Title is the first of many 🙌#CuadrasRodriguez pic.twitter.com/zT9daG65Oe

Rodriguez, now 15-0, 14 KOs, became the youngest current fighter in boxing to hold a world title and the first ever to be born in the new century (2000) on his way to the win. The San Antonio, TX young star was more effective than the Mexican veteran Cuadras including scoring an impressive 174-483 of power shots to build up his lead at Phoenix’s Footprint Center Arena.

He knocked Cuadras down in round three and continued to score with hard straight lefts out of the southpaw stance, as the fight wore on. Rodriguez replaced former WBC champ Srisaket Sor Rungvisai of Thailand who had tested positive late last week for Covid 19 and couldn’t come to the U.S.

“This is a dream come true,” Rodriguez told DAZN in the ring Saturday night. “I’ve worked very hard to get to this point.”

When asked about the move up from minimum weight of 108 lb. to Super Flyweight at 115 lb. and whether he will stay there, now?

Rodriguez said, “I feel good at 115. If I get a good opportunity to fight someone else at this weight, then I’m more than happy.”

The reference is to the possibility that Rodriguez will now get a shot at the winner next month of the Super Flyweight showdown between former world champ, hard punching Roman “Chocolatito” Gonzalez and Julio Cesar “El Rey” Martinez. They will fight March 5th in San Diego, CA.