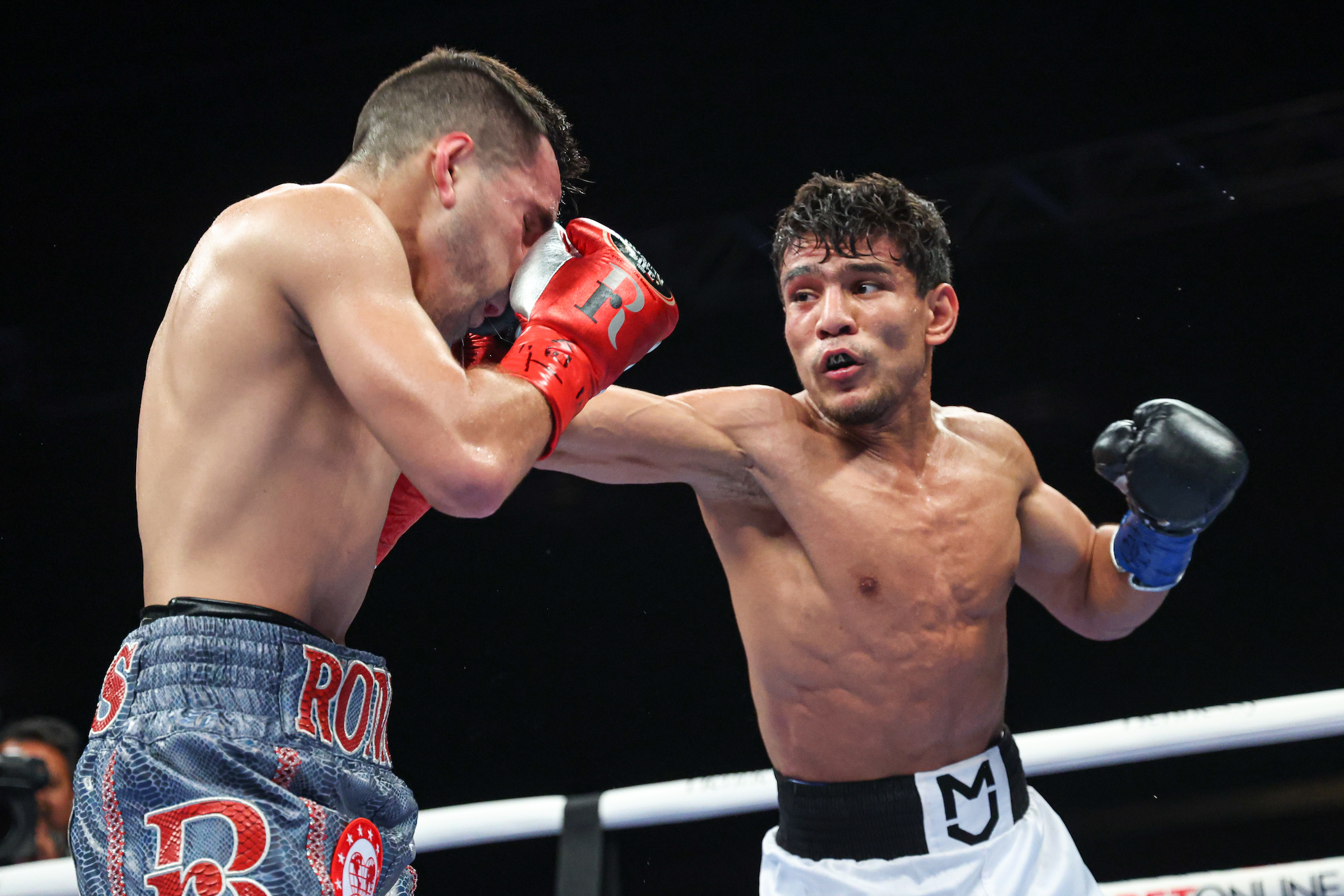 Unbeaten unified junior featherweight champion Murodjon “MJ” Akhmadaliev was expected to easily defeat American veteran Ronny Rios Saturday night in San Antonio, Texas. However, it was another example of “anything can happen in a boxing ring” and that came through, again. This, as MJ  hurt his left hand early in the fight and had to persevere on before finally scoring a 12th round TKO to retain his titles.

The bout was the co-feature fight for Matchroom Boxing for the main event at the new Tech Port Arena of local star Jesse “Bam” Rodriguez going against former world champion Srisaket Sor Rungvisai of Thailand.

Akhmadaliev was clearly the more heralded fighter in this battle, having formerly been Bronze Medalist for Uzbekistan in the 2016 Olympics before turning professional. He was making the third defense of his unified championships and the southpaw was effective throughout the night with hard right jabs and right hooks off of them.

Akhmadaliev had a commanding lead on the scorecards headed into the championship rounds before finally rocking the Californian Rios, now 33-4, in the 12th.

He hammered Rios with left hooks to the head and body and eventually, a right hook body shot seemed to stagger Rios along the ropes. The Uzbek also landed a solid left to the temple of Rios which wobbled him and eventually, a barrage of rights and lefts dropped Rios down on one knee.

He rose wobbly to beat the mandatory 8-count, but the end came quickly, shortly after as MJ again scored with rights and lefts prompting the referee to jump between the fighters and stop things at the 2:06 mark of the final round.

The victory moved MJ to 11-0 with 8 KOs and has him calling for an undisputed title shot with Philadelphia WBC/WBO champ Stephen Fulton.. However, Fulton, who is aligned with Premier Boxing Champions likely won’t get involved in an Undisputed bout with MJ anytime soon. He reportedly is looking instead to fight bantamweight champion and pound-for-pound superstar in Naoya “the Monster” Inoue at a later date.

Still, MJ deserves a lot of credit on Saturday night for the guts that he showed to continue to throw hard left hands. despite the hand being bothersome from early on in the fight. And, he did eventually get his knockout to improve his status.

Earlier Saturday night, undisputed women’s world welterweight champion Jessica McCaskill dominated her opponent Alma Ibarra in scoring a TKO stoppage at the end of the third round. McCaskill out of Chicago overwhelmed the outclassed Ibarra with lead right hands being her best weapon. She staggered Ibarra with one midway through the first round that set the tone.

Although there were no knockdowns, McCaskill, now 12-2, 5 KOs, was in control and rocked Ibarra, who dropped to 10-2,  with a hard left hook late in the third. Another overhand right scored and Ibarra was clearly in trouble to barely survive the third round. Her corner elected to stop the bout before the fourth for the TKO.

Also on the main card streamed by DAZN, unbeaten featherweight prospect Raymond Ford of New Jersey improved 12-0-1 with a near shutout decision over local San Antonio fighter Richard Medina. Ford used his jab effectively throughout and scored hard rights behind it on Medina, as well. The scorecards read 100-90 x 2 and 99-91 for rising Ford.