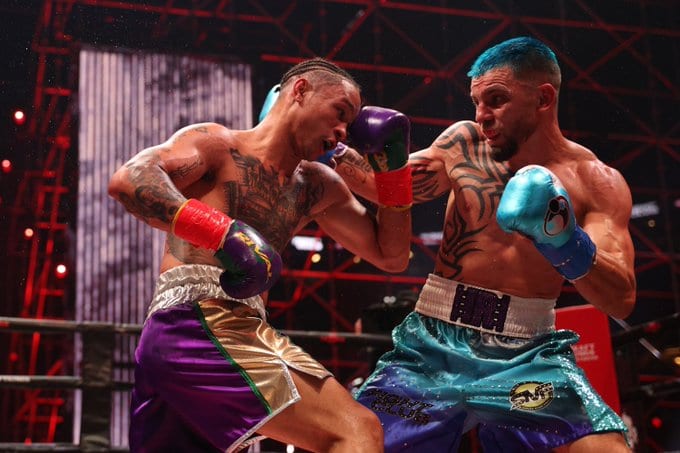 Former WBA World Jr. Welterweight Champ Regis Prograis scored a victory Saturday night in Atlanta, but not without a bizarre circumstance involving opponent Ivan Redkach laying on the mat feining that he had been hit with a low blow.

The now 26-1 Prograis was credited with a 6 round technical decision after landing an overhand left followed by a glancing straight right hand to Redkach’s right side and kidney area. Judge for yourself on the punch in question,

Did you think this was a legal or illegal blow?#TrillerFightClub pic.twitter.com/kCPllpCJFb

What happened next was straight out of “bad acting” outtakes, as Redkach laid on the mat hollering and grimacing, while holding his crotch area. The referee seemed to buy that it was a low blow, ordered Prograis to a neutral corner and started the clock on Redkach being given five minutes to recover.

Quickly though, replays being shown on the Triller app and even on big boards in Mercedes Benz Stadium, clearly showed the punch wasn’t a low blow. Redkach was actually put on a stretcher for his antics, but soon after the three judge unanimous decision was read.

Prograis seemed confused initially that he might be disqualified but continued to point the replay boards showing the punch wasn’t low. And, in the end, he got the victory.

Prograis previously won the WBA’s 140-pound belt in April 2019 when he stopped Kiryl Relikh. He suffered his first career loss six months later, when he dropped a majority decision to Scotland’s Josh Taylor in the finale of a World Boxing Super Series Tournament.

He hopes to get Josh Taylor in a potential rematch. That’s provided Taylor wins his Undisputed battle with Jose Ramirez at 140 lb. coming in May.

As for Redkach (23-5, 18 KOs), he last fought in January, losing a unanimous decision against Danny Garcia in New York.

And, the boxing community and internet won’t be kind to him acting as though it was a low blow by Prograis.