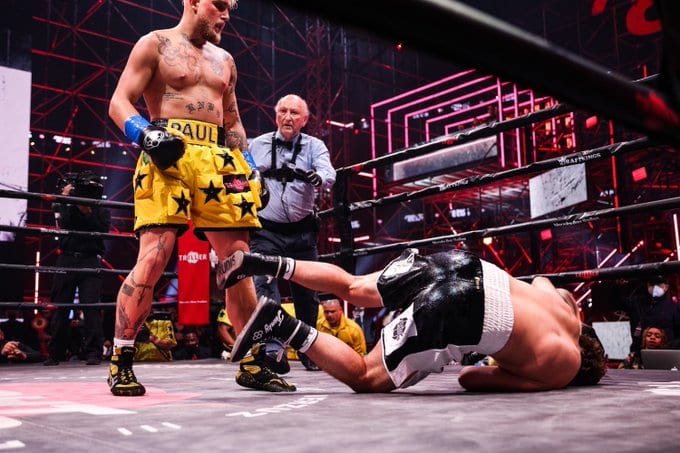 Saturday night at Mercedes-Benz Stadium in Atlanta, Triller and their “Fight Club” series with concerts blended in, put on another hybrid show which lasted over four hours. And, eventually it culminated with a predictable, and almost comical one punch knockout by former actor / YouTube Star, Jake Paul, in the main event.

And while that one-punch KO of former amateur wrestling and MMA fighter Ben Askren is viral all over the internet on Sunday, there are other factors to take into account if, in our opinion, Triller is going to succeed long-term with trying to televise boxing and make money off of it.

So, we’ve come up with five takeaways from the show Saturday and moving forward,

Number One: Get to it all quicker

While Triller was trying to draw in as much non boxing or even non-sports audience as possible by doing lengthy concert segments with rap artists and the likes of pop star Justin Bieber, they were doing so at the expense of delaying the thing that fight fans wanted to see the most: the fights.

Further, it’s not as if these concerts were like the halftime of the Super Bowl or something prior to a big U.S. sporting event while only going on for a couple of songs/short time. No, in the case of the rap concert involving one of the co-owners of Triller, Snoop Dogg, famous rapper/actor Ice Cube and others lasted for nearly an hour before the co-feature fight of Jr. Welterweight contender Regis Prograis and journeyman Ivan Redkach.

Number Two: Have more credible fights than just a “one off,” like Saturday

The concerts pushed the starting time of the only real legitimate boxing match on the card to almost midnight Eastern time. Which by then many fight fans, especially in the Eastern time zone and who cared about seeing Prograis, had already tuned out, gone to bed or were doing other things.

Now, the Prograis-Redkach fight did have some action, but it was a much bigger attention getter because of the controversy in the way that it ended. That happened when Prograis clearly landing a punch to the right side and back of Redkach. Yet Redkach acted like he had been hit by a low blow and was “writhing in pain” in front of the referee, the audience in attendance and on Triller app in a silly attempt to get a disqualification win.

Eventually, Prograis was declared the winner by six round technical decision, because Redkach refused to continue.

Prograis, by the way, was none too happy in the middle of the night and took to social media in this NSFW, expletive-filled response on why he is not being credited at this point with a KO for his record,

Shout out to @triller for the event. Sorry to all my fans for the outcome of my fight. Wasn’t what I expected ? pic.twitter.com/nvIXzxf4uy

Still, if there had been another exiting legitimate fight or two in and around the music, it would have been better for fight fans.

Number Three: Way too many people talking at the same time and over each other on the broadcast

Further adding to the confusion of the Prograis ending was that the two legitimate boxing broadcasters: Ray Flores, one of the main commentators for Premier Boxing Champions on Fox, a ring announcer and someone who’s been around the sport 10+ years and the legendary Al Bernstein who’s in The Boxing Hall of Fame as an analyst for 40 years with ESPN in Showtime, we’re being talked over repeatedly by multiple others. This included Snoop Dogg, Mario Lopez and other voices Triller had on the commentary.

Triller also brought Oscar De La Hoya out to serve as yet another voice on the Steve Cunningham-Frank Mir under card bout. And, while “the Golden Boy” was there in part to promote his own Triller fight in July, he talked non-stopped, even yelling out at everything, over the top of the 4-5 other voices.

Luckily, that was only for one fight.

Still, Triller did the same with comedian Pete Davison of “Saturday Night Live” being brought out for the Paul-Askren main event. Yet another talker talking over everything and further confusing the viewer, who couldn’t see all the voices to keep it straight.

It brought to mind the Hollywood spoof in “The Naked Gun” early 90s comedy starring Leslie Neilsen, where in the climatic baseball scenes of  the film, they had a roll call of famed U.S. sports broadcasters brought in for comedic levity,

No. There was no Dick Vitale or the late Dr. Joyce Brothers, but still, too many voices on Triller Saturday night.

Too many people interrupting each other and not enough of the boxing people coherently clearing up what was happening.

Number Four: Have the best fight be the main event

When the Prograis-Redkach controversy ended, it was immediately followed by Bieber taking to the stage and performing for over another 15 minutes delaying the Paul – Askren main event until almost 1 a.m. eastern time.

And again if you were wanting a boxing fan to stick around to watch non-fighters fight, yet make them wait as long as you did, it’s counter productive.

This needed to be a better main event. Much better for all the waiting.

Instead, what you got was Paul hitting Askren with a big overhand right a minute into the fight and Askren wobbling around after rising only to have the referee stop it..

The outcome was not unexpected, especially when Askren took his shirt off at the weigh-in Friday and revealed that he was easily 15 lb. overweight with belly fat for the Cruiserweight contest. Thus implying, that he had not taken training that seriously.

Then again, not much in the ring other than Prograis fighting, was expected to be taken seriously.

For his part, Paul has a ripped physique and has now won back-to-back fights for Triller knocking out professional basketball player Nate Robinson and now, Askren with a big right hand punch.

However, those viral video moments on the internet and social media carry little weight for what it actually means to the boxing world. He’s got to fight in a better, more competitive fight or the “who cares??” cries will intensify.

Number Five: “Pick a lane: to be either being boxing or “goofy entertainment with concerts” moving forward.

The example that comes to mind is the twice failure of World Wrestling Entertainment’s Vince McMahon and his Spring football “XFL” League. And, the criticism 20 years ago when he first tried it and a year ago when he tried it again, was that it was: “not wrestling enough for his wrestling fans, nor football enough for football fans,”

It failed miserably both times.

Triller is apparently going to operate off this game plan of using musical acts and other entertainment in around its fights, including now its upcoming June show with Undisputed World Lightweight champion Teofimo Lopez defending his title.  Former Undisputed Heavyweight champ Evander Holyfield will be on the undercard in an exhibition fight.

Now, if they take our advice above on adding another legit fight or two, there could be real interest from fight fans.

However, if it’s all delayed by 30 minutes, an hour, or two hours of music, waiting, running off fight fans, it will be no different.

“Not enough entertainment for the music crowd and not enough boxing for the boxing crowd.”