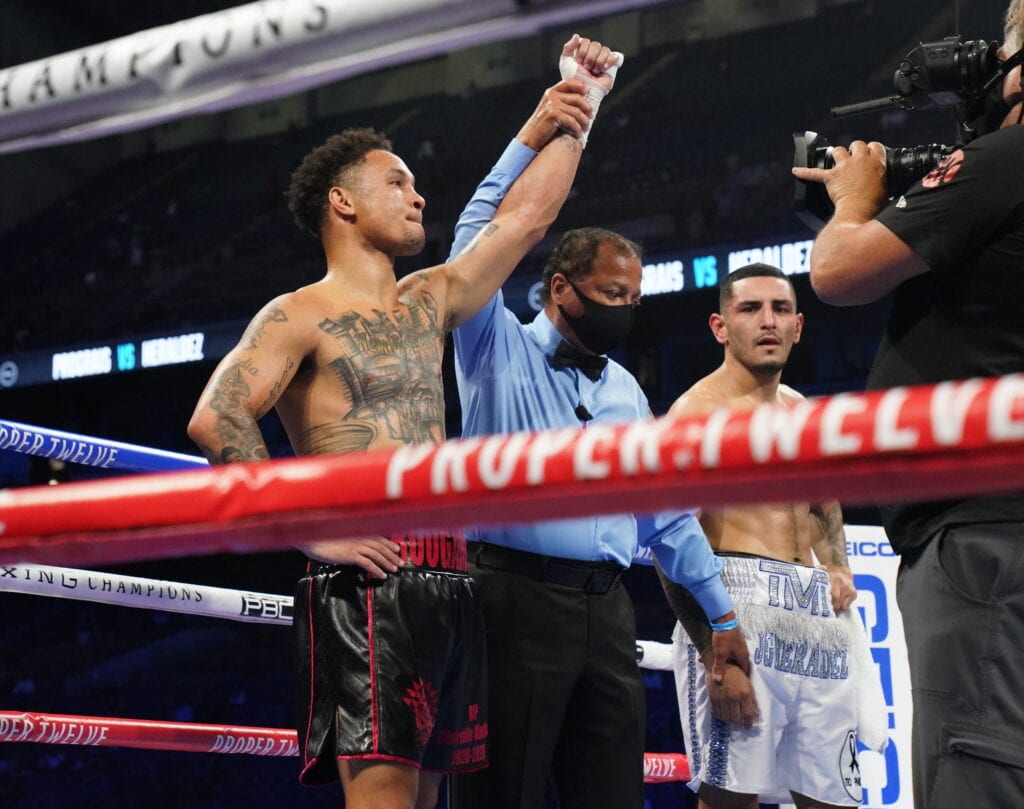 Triller Fight Club today announced three additions to its April 17 card and they are some familiar faces as super lightweight Regis Prograis will take on Ivan Redkach; heavyweight MMA Bad Boy Frank Mir will battle legendary heavyweight Antonio Tarver; and Joe Fournier will challenge music icon and worldwide star Reykon. In the headline matchup at Mercedes-Benz Stadium in Atlanta, Jake Paul takes on former Bellator and ONE Championship champion Ben Askren, with all bouts seen on the main Pay Per View card.

In the U.S. and Canada, fans can order via cable/satellite. Globally, FITE’s PPV platform will once again power the main hub of the event, TrillerFightClub.com. Fans worldwide can buy the digital event via FITE.tv, any of the FITE mobile/OTT/Smart TV platforms, or directly from the TrillerFightClub.com website which features fight news, announcements, promotional videos, and a digital portal to buy the event. The Fight Club is a partnership between Triller and Snoop Dogg and is spearheaded by Ryan Kavanaugh.

“Fight Club’s mission to bring something for everyone, continues forward,” said Kavanaugh. “We are delivering fights that even the deepest purist will love and have expected on broadcast TV, such as Prograis v Redkach, all the way to social media and music icons Fournier and Reykon. Our goal is to continue to deliver a four quadrant event that brings the under 30 audience back into this world by crossing boxing, music, social media and culture.

“We are proud of our team’s ability to pair top notch rising stars with compelling and unique matchups and some of the greatest names in the sport, and combine them with music, fashion and popular culture in an evening that will set new standards for success not just in boxing, but in sports and entertainment,” he added.

“I’m very excited to be fighting on this card,” said Prograis. “It’s a whole different type of fan base and I plan on giving the fans a night to remember. Triller Fight Club has been changing the game and I’m bringing my A-game to help progress this new platform.”

“I am built differently – a champion, refusing to take anything but a win,” said Redkach. “I will not stop until I have my victory and there is nothing that will get in my way. My mindset separates me from the rest.”

“I am a competitor. I have been all my life,” said Mir. “I take on challenges to grow and better myself as a person. I have always wanted to test myself in the boxing ring so when this opportunity arose I jumped on it. I will prove that MMA training in fact makes us the best boxers, and I stand for all MMA fans and fighters. This isn’t just a boxing match, this is the one that will finally prove the skill and dedication of all MMA fighters.”

“It’s been a long-time coming. 52 is 52,” said Tarver. “Facts are facts. As pound for pound best heavyweight of my time I am bringing it. Mir is a great fighter but I hope he’s training hard because I’m coming at him like a freight train, and one that is unstoppable.”

“I’ll give it to Reykon he’s a really brave man but also a really stupid one. April 17th he’s really going to understand why picking a bar fight with me was about as good of a decision as those stupid tattoos that he thinks make him look tough,” Fournier said. “Anyway don’t blink as I’ll be surprised if he can handle my power for more than one minute! I’m more worried about the guest list for my after party at Cheetahs.”

The April 17 card will be Triller Fight Club’s first 2021 event, following the debut record-setting Tyson vs. Jones PPV fight in 2020, which shattered all digital fight PPV records and became the eighth most successful fight PPV in history. This event will feature three major undercards and spotlight several prominent musical acts and commentators. The card will be subject to all professional boxing rules, with eight rounds and 10-ounce gloves, and each will be an official professional fight.

Prograis (25-1, 21 KOs) won the WBA’s 140-pound belt in April 2019 when he stopped Kiryl Relikh. He suffered his first career loss six months later when he dropped a majority decision to Josh Taylor in the finale of a World Boxing Super Series Tournament.

Redkach (23-5, 18 KOs) last fought in January, losing a unanimous decision against Danny Garcia in New York. He defeated former world champion Devon Alexander on June 1, 2019 with a sixth-round TKO in San Jacinto, California for a third successive victory. He began his pro career in 2009, earning wins in his first 18 decisions.

Mir will make his boxing debut, and most recently competed for Bellator MMA in the heavyweight division. He formerly competed in the Ultimate Fighting Championship (UFC) for sixteen years. A former two-time UFC Heavyweight Champion, he holds the record for the most finishes and the most submission victories in UFC Heavyweight history. Mir possessed the longest uninterrupted tenure of any UFC fighter, from 2001 to 2016. He was also the first man to knock out and the first to submit the legendary Antônio Rodrigo Nogueira.

Tarver (31-6-1) held multiple light heavyweight world championships, including the WBA (Super), WBC, IBF and Ring magazine titles, as well as the IBO light heavyweight and cruiserweight crowns. As an amateur, Tarver represented the United States at the 1996 Olympics, winning a bronze medal in the light heavyweight division. Tarver remains the only boxer in history to have won gold at the Pan Am Games, World Championships and U.S. Nationals all in the same year. Outside of boxing, Tarver starred as “Mason ‘The Line’ Dixon,” the heavyweight champion in the 2006 film Rocky Balboa.

Fournier (8-0), the London-born entrepreneur in the fitness space, took up boxing professionally in 2015 and is returning to the ring after a three year absence. Fournier won the vacant WBA international light heavyweight belt by defeating Wilmer Mejia in the eighth round in the Dominican Republic to move up to 11th in the rankings. He made his debut in the light heavyweight division against Jorge Burgos in the Dominican Republic then defeated Manuel Regalado and Pedro Sencion before stopping Bela Juhasz in London on May 21, 2016.

Reykon is one of the rising Latin stars in the world of reggaeton music, with numerous hit singles in the past 10 years and his first studio album in 2018, “El Lidér.” This will be his first professional bout.

In the headline matchup, Paul, whose knockout against former professional athlete Nate Robinson set all kinds of records for fan engagement, meets Askren, who continues to transition to boxing after an MMA record of 19 wins and two losses, with six knockouts and six submissions. Askren made his professional MMA debut in 2009 against Josh Flowers where he won by TKO in the first round. As a former Bellator Champion, ONE Championship Champion, PAN American Champion in freestyle wrestling, two-time NCAA wrestling champion for Missouri and two-time winner of The Dan Hodge Trophy, Askren joins Triller’s Fight Club with a significant amount of experience in the ring.

In addition to being a co-owner, Snoop also provides strategic counsel to The Fight Club, helping to select fighters and musical acts for the show-stopping events. An entertainment expert who has successfully maneuvered through a range of projects in a variety of different fields, Snoop secured his spot as a fan favorite during Triller’s first sporting event, Tyson vs. Jones.