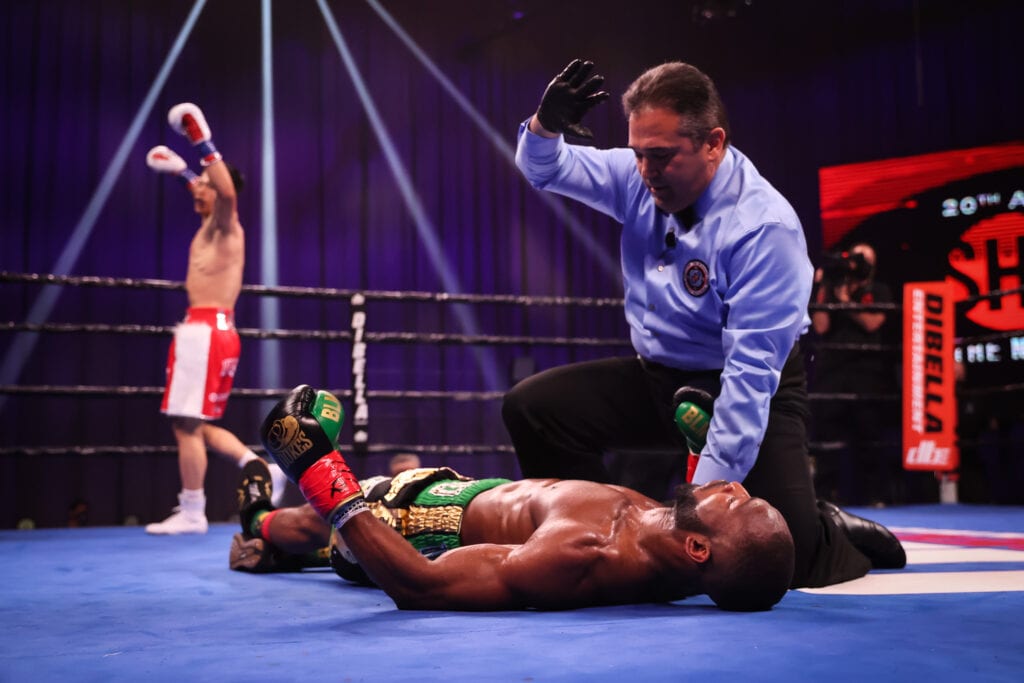 Rising, unbeaten California Jr. Welterweight Brandun Lee doesn’t lack for confidence and on Wednesday night, he once again backed it up with a big time punch.

Headlining, once again, for the Showtime Network’s “ShoBox” series at the Mohegan Sun Casino in Connecticut, Lee made quick work of Philadelphia veteran Samuel Teah with a highlight reel, overhand right KO. That moved his record to an impressive 22-0 with 20 knockouts.

Here’s the finish in round three,

The “this kid can punch” comes from former world champion/Showtime analyst Raul Marquez, who has now seen Lee repeatedly score big KOs over the last year in their series.

The 21 year old Lee, who fights out of LaQuinta, California, had just dropped Teah for the first time in his pro career in round three with a big combination, followed by a short right to the side of the head. That set up the ending, where Teah, now 17-4-1, was knocked cold by Lee’s big punch.

Lee responded to critics of his recent competition afterwards on the media zoom conference,

“It was a step up in competition and even the betting odds were way closer than usual,” Lee said. “Most of the time, I’m a -5,000 favorite or something like that and this time it was only -1,000. I was getting a lot of DM’s on Instagram and Twitter of people telling me that Sam is going to be tough. Sam is going to beat you. But hopefully, the doctors check him out and everything is all good.”

Again, he doesn’t lack for confidence or saying so. Lee continued with,

The win was Lee’s 13th consecutive KO and created plenty of social media “buzz” Wednesday night, as the video of his one punch KO had already been viewed tens of thousands of times on different outlets by midnight Eastern time.

Now, the question becomes: will Lee step for a bigger test at 140 lb. and can Premier Boxing Champions put him in position for world title contention by 2022?