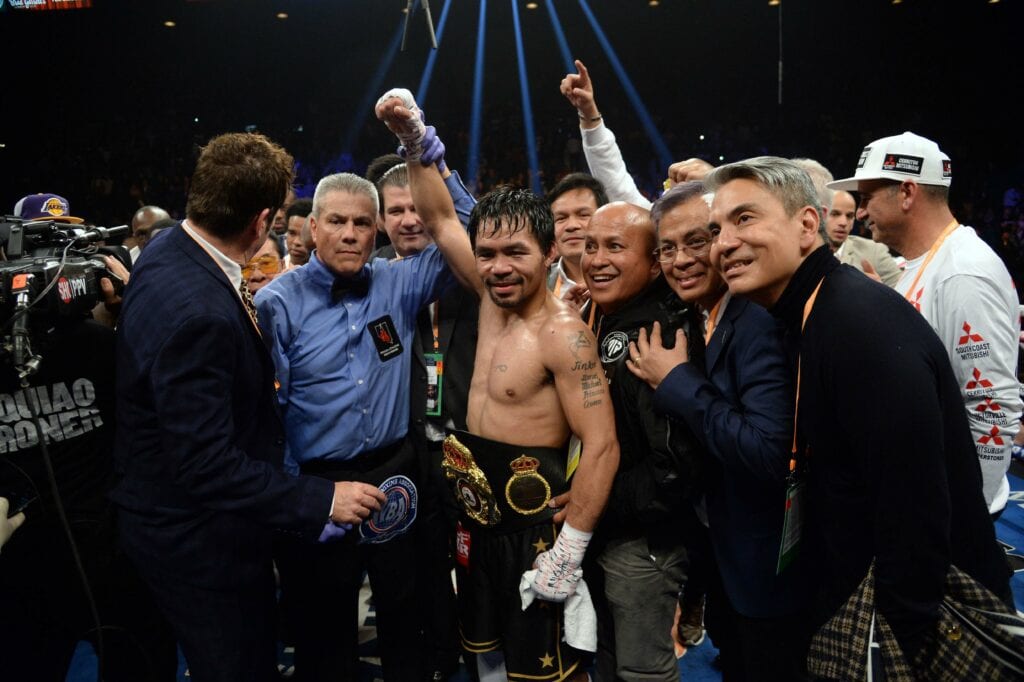 One of the most anticipated fights of the year is about to happen as WBA titleholders Manny Pacquiao and Keith Thurman in a report first mentioned by boxing insider Mike Coppinger.

(Mike also had mentioned this when chatting with us last week on the podcast which you can listen to here.) Per his report, the sides are in advanced talks for it to be on pay-per-view with a date projected to be July 13th.

To say that this fight is a long time coming may be underselling it a little bit. Keith Thurman has been calling out Manny Pacquiao for a match as far back as before and definitely after his win against Shawn Porter in 2016. What has slowed this process down on both sides is the usual case of boxing politics and an injury to Thurman’s hand and elbow which left him sidelined for all of 2018.

SOURCES: Manny Pacquiao and Keith Thurman are in advanced talks for a pay-per-view welterweight title showdown that’s being targeted for July 13. No deal yet but it’s expected to be completed #boxing

Thurman (29-0,22 KOs) the WBA “super” titleholder, made his first return back from injuries into the ring and won by majority decision against Josesito López (36-8) earlier this year in January. In that fight, the question of Thurman’s ring rust after a 22-month layoff would be answered and while Lopez did get to him in spots of the seventh and eighth rounds, Thurman did knock Lopez down once and was in control for most of the fight.

Pacquiao (61-7-2, 39 KOs) himself has been making a rebound since his loss to Jeff Horn in July of 2017 with a TKO victory of Lucas Matthysse last year in Malaysia and in his most recent fight beating Adrien Broner by unanimous decision in January. The 40-year-old WBA “regular” southpaw titlist is showing no signs of hanging the gloves up and this would be his second fight under the Premier Boxing Champions stable. He is still a box office draw and in the last fight against Broner which was on pay-per-view and drew what was tracked at around 400,000 buys. Which is more than the mega fight of Errol Spence-Mikey Garcia brought in at about 360,000.

What this fight does for Keith Thurman is it will once again establish him to those not in the boxing loop back into the mix as a household name with a marquee matchup against Manny. For Manny, it will be another title shot in future Hall of Fame career.