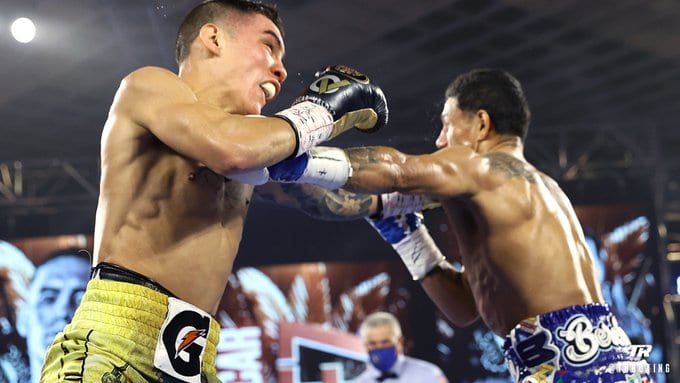 The much anticipated all Mexico battle ended with a new titleholder as Oscar Valdez is the new WBC Jr. Lightweight champion stopping Miguel Berchelt in ten rounds to become the new champion.

The stoppage’s time was 2:59 of the tenth round as Valdez, who came into this one the underdog, was looking to change that as he had been waiting for this fight held at the MGM Grand in Las Vegas for a while.

The opening round between these two was a feel-out round with nothing of much going on. Both were looking for openings which there weren’t any at all. The most obvious visual was the fact that Berhchelt was the bigger fighter who had the reach advantage. Valdez was looking to use his jab to outbox Berchelt, and that work was also seen early as he started a nose bleed on Berchet in the second round.

It was clear that the jab from a distance would be the factor for Valdez to win this fight in the early going.

Another thing that was glaring as this fight didn’t have the fireworks that we expected from Berchelt as he couldn’t get anything going. Valdez got Berchelt with a left hook which had him staggered, and from that moment in the fourth, he was on the defensive. The onslaught pressed on, which caused a knockdown ruled to close out the round as the ropes held up Berchelt.

Referee Russell Mora saw this and started the count. This was the fireworks kicked in all in favor of Valdez.

.@oscarvaldez rips stunner after stunner to score the knockdown late in Round 4! War is brewing in Vegas …#BercheltValdez | Main Event LIVE NOW on ESPN & ESPN+ pic.twitter.com/3r6IGF5JNf

The fifth round started with more of the same, with Berchelt on shaky legs still. So much so that Mora stated he had to show him something. At this point in the fight, it was only a matter of if it seemed as Berchelt wasn’t firing at all and seemed to be worse for wear. Berchelt had his best round in the sixth as he could lad a lot more effectively and keep the fight in close.

Valdez scored another knockdown in the ninth with an uppercut, and Berchelt was warned at the end of the round that this would be the end of it if he didn’t show anything as he was dealt with a lot of punishment in this fight.  The tenth round was the last of this one as Valdez smoked Berchelt with a right that sent him down face-first for the third knockout of the night to the end of this fight.

An explosive left hand at the bell in Round 10 closes a masterful performance, and he is now a 2-time world champion! 🇲🇽👑#BercheltValdez | #AndTheNew | ESPN pic.twitter.com/HFw8eT7Mqm

Berchelt was immediately checked by medical personnel as he was out in the ring to make sure he could still move in what was a scary situation for a few moments.

With the win, Oscar stays undefeated to go 29-0 with 23 KOs, and we’ll see if we get a rematch for this one with the longtime titleholder Berchelt, but Valdez was on a different level tonight and showed it to become the new champion.