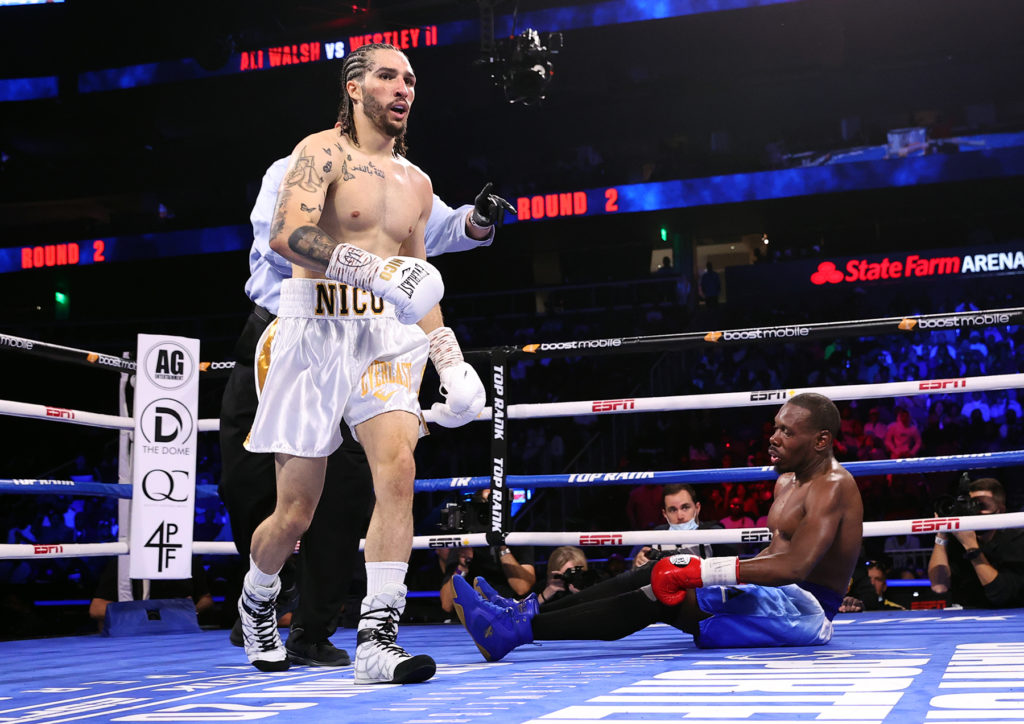 Nico Ali Walsh came into the State Farm Arena with Gangsta’s Paradise by Coolio and that was longer than what he had in the ring against James Westley II stopping him in three rounds.

The official time of the stoppage was 2:30 seconds of the third round in what was a good stoppage win for Ali Walsh.

Walsh in case you weren’t aware is the grandson of Muhammad Ali and started on the defensive as he was getting attacked with lead-left hooks and a body attack in the four contest.  This work seemed all for naught as towards the end of the round Walsh made the adjustment and was and to land shots almost exclusively with his right.

As the second round started, the action slowed down as Westley turned the fight ugly with clenches and holds. Walsh was still able to string together punches together on Westley and ended up sending him down with a solid right hand behind a jab that planted him to close out the round. Westley beat the count but was worse for wear in between the rounds and was immediately sent down in the third, signaling the end of the contest.

.@NicoAliX74 lays one right on the chin of his opponent, earning the TKO victory in this second pro outing. 💪#HerringStevenson | LIVE on ESPN pic.twitter.com/dI1HOuj6Pt

Walsh (2-0) in his second pro fight had to deal with some adversity early on but not enough to turn this into one-way traffic for the remainder of it.

“I truly didn’t feel the unch he threw on me. It’s mutual respect both ways and my hats off to him.”,  Ali Walsh said after the fight to Benardo Osuna.

This contest that came from the State Farm Arena in Atlanta, Georgia was the opening bout of the broadcast (after an SEC football overrun) that aired on ESPN leading into the main event between Jamel Herring and Shakur Stevenson.