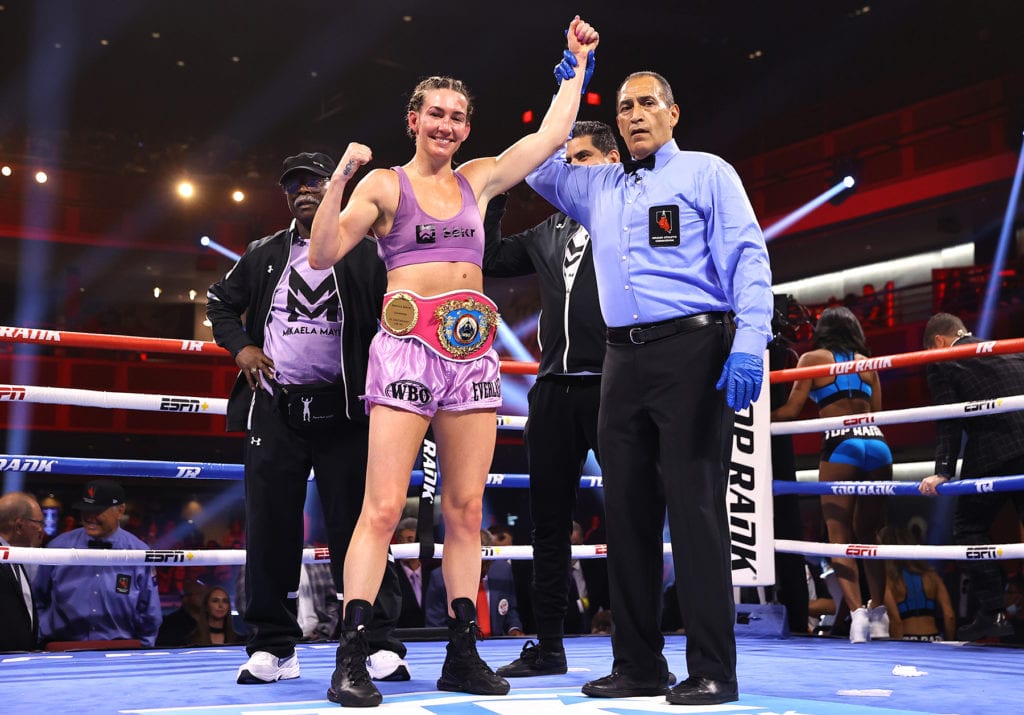 Mikaela Mayer Celebrated Her Birthday With The USA

On Sunday, the United States celebrated it’s independence from July 4th, 1776 and just like the country, current WBO Women’s Super Featherweight champ, Mikaela Mayer celebrated her own birthday, too.

Mayer, who most recently defended her title in a Las Vegas co-feature on the undercard of the “Monster” Inoue-Dasmarinas Top Rank Boxing/ESPN Las Vegas card two weeks ago was enjoying herself Sunday in Mexico. At least that’s what she wanted the public to believe on social media,

Mayer, who is a former U.S. Olympian is unbeaten as a pro at 15-0, 5 KOs, is certainly one of the most marketable names (and faces) for the women’s part of the sport.

In her last bout late last month with former two division world champion, Érica Farías of Argentina, Mayer was her usual dominant self, as she overwhelmed Farias with her hand speed and superior skill over 10 rounds to retain her title.

Mayer won her world title last October on the Inoue-Jason Moloneyl Top Rank card then, dethroning longtime champion Ewa Brodnicka via a near-shutout unanimous decision. Since turning pro, Mayer has lost only a handful of rounds, and last July, she became the first female boxer ever to headline a Top Rank on ESPN card.

Top Rank’s Bob Arum had said of Mayer in the buildup to the Farias fight,

“Mikaela Mayer is the future of women’s boxing, and I have no doubt she’s going to shine in her first world title defense,” said Top Rank chairman Bob Arum. “She wants all of the top names, but she must first get past a tough former world champion in Erica Farias.”

Mayer did that and is now in that position.

In fact, her next big challenge is likely the World Boxing Super Series tournament, where the four world champs at Women’s Super Featherweight will all allegedly compete. The WBSS had more on that,

So, with a title defense, her birthday and that tournament looming, it’s a great Summer for Mayer.