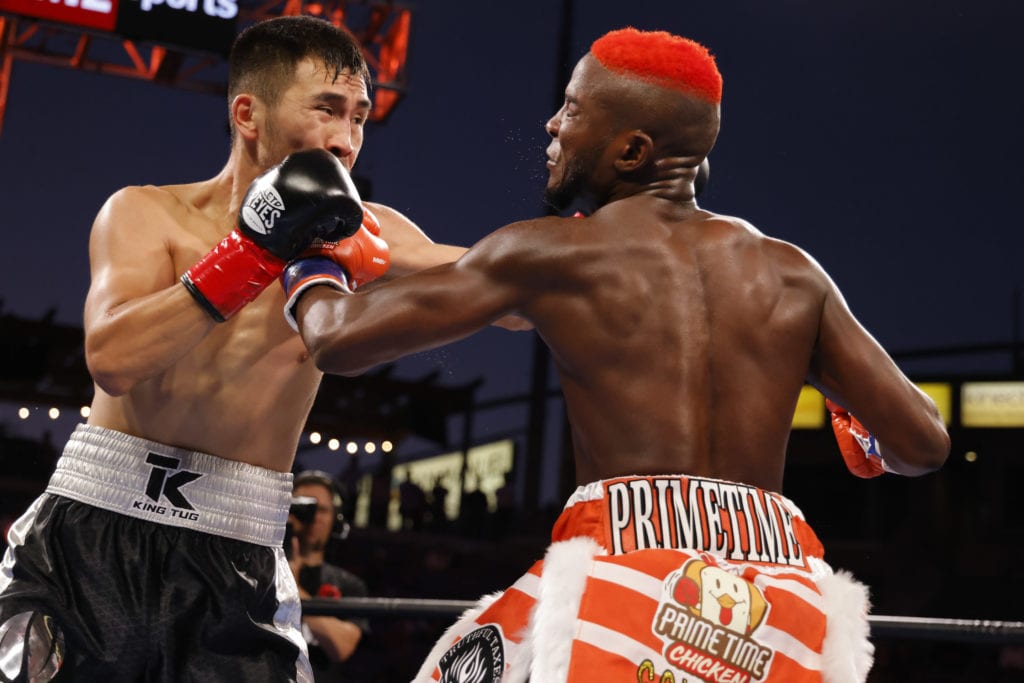 Chris Colbert closed out the Showtime doubleheader from the Dignity Health Sports Complex Saturday night and had an easy time against late-replacement Tugstsogt Nyambayar winning by unanimous decision.

The Mongolian born Nyambayar took this fight on two weeks’ notice as he replaced Yurkois Gamboa who had to get withdraw due to injury.

Early on in the fight, it was clear that Colbert was looking to lead with the jab and throw combinations off of it which he did. However, Nyambayar when he was able to stay in his range was able to land on Colbert. This worked well for Nyambayar, especially in moments when Colbert was trying to switch stances and was getting caught. Despite this, Colbert looked to be winning early on due to his throwing output alone.

#ColbertNyambayar in a war. Both throwing bombs in the early rounds. pic.twitter.com/e9wcisPecx

As the fourth round came on, it was clear that Colbert was trying to send Nyambayar to the moon by setting up shots to the body than going up to the head. This was Nyambayar his first fight at 130 pounds as he normally campaigns at 126 pounds but his punch volume wasn’t keeping Colbert off of him as he was throwing jabs at will.

By the sixth round, it was slipping away from Nyambayar as he was getting unloaded on with Colbert being in control. Nyambayar to his credit was still pressing by to find his range but as the fight kept pressing on, wasn’t able to find it. Also, Nyambayar seemed to stop attaching the body of Colbert. By the end of the eighth round, the size, speed and most importantly making Nyambayarmiss had Colbert on cruise control.

Colbert made a promise before this fight that this would not last past ten rounds and he tried to get that stoppage early on in the round and even playing possum a little bit to make it happen. That plan didn’t work and both men were ready to go at the start of the eleventh round as the fight went the distance.

Colbert remains undefeated (16-0) after this one and the broadcast mentioned next up would be a possible matchup for the secondary title that Gervonta Davis has at 130 pounds against Xavier Martinez if Davis vacates it. That sounds promising if that fight is next but tonight, Colbert was all over Nyambayar in this one.