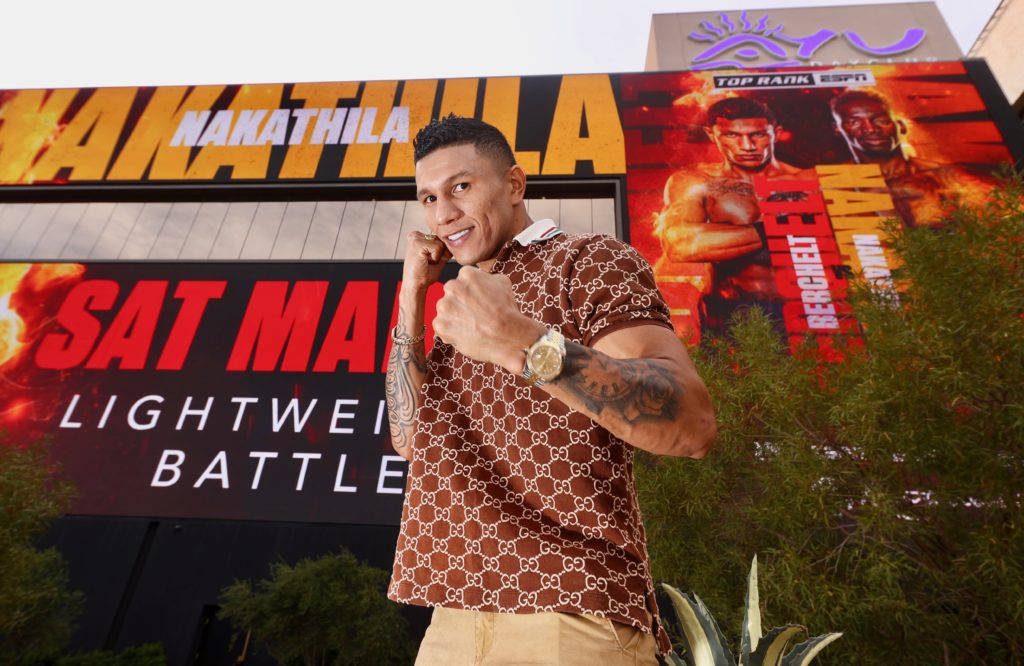 Coming up Saturday night, former WBC Super Featherweight world champion Miguel “El Alacran” Berchelt is back in the ring and campaigning as a Lightweight. Thus will begin his quest to become a two-weight world champion when he battles Jeremiah Nakathila in the 10-round Top Rank Boxing/ESPN main event at Resorts World Las Vegas.

Berchelt has also moved his training camp from Mexico to Las Vegas to work with a new head trainer, Jorge Capetillo. The Nakathila bout will be his first since his title reign ended via brutal knockout at the hands of Oscar Valdez in February 2021. Berchelt (38-2, 34 KOs) made six successful defenses of the title he won in January 2017, and he hopes the Nakathila fight is the start of a fruitful lightweight campaign.

Berchelt spent camp training alongside UFC star Brandon Moreno, the first Mexican-born champion in the organization’s history. He ran the Mount Charleston roads and had access to more world-class sparring than ever before.

“This will be a great comeback. I am very happy and excited to be the first athlete to bring a sporting event to Resorts World Las Vegas. I am ready to make my debut at 135 pounds against a great opponent like Jeremiah Nakathila,” Berchelt said recently.

I’m going to put on a spectacular show for my people, and I’m sending a message to the Lightweight division. They must contend with me!”

“My goal is to become world champion at Lightweight. It will not be easy because I know that at 135 pounds there are a lot of great fighters. Most importantly, I have the desire and the potential to be crowned once again as world champion.”

About training alongside the first Mexican champ in UFC history

“It motivated me to train with Brandon Moreno. The truth is that he is a great person, and he has done amazing things to raise the Mexican flag very high. Right now, we are training together, and I feel very happy to be his training partner. We are both working hard to continue representing Mexico with great pride.”

As for the veteran Nakathila, he’s 32 years old and 22-2 but best known for having been part of a dull 12 round decision loss to WBO Jr. Lightweight Champ Shakur Stevenson last June. He does have some power with 18 KOs but most of that is against suspect competition for the Namibian.

Berchelt-Nkathila headlines for Top Rank on ESPN for the Resorts World Events Center in Las Vegas.