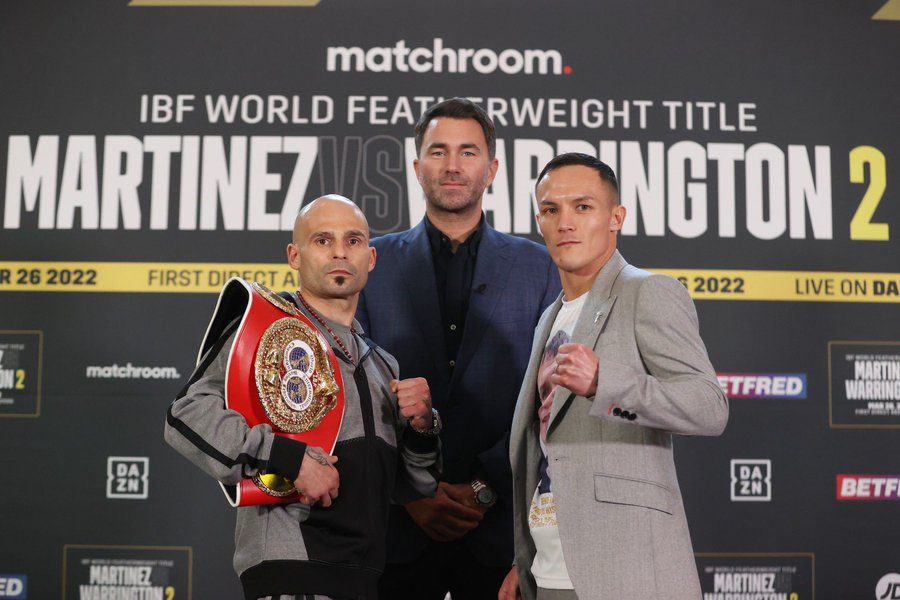 Coming up Saturday night in Leeds, England, it’s a highly anticipated rematch from a few years ago for the IBF Featherweight World title. This, as veteran Kiko Martinez looks to duplicate his surprising KO title win last November over Kid Galahad by taking out his countryman and former champ himself, Josh Warrington.

The Martinez-Warrington bout will headline the Matchroom Boxing/DAZN show at the First Direct Arena and on Thursday the new champ made it clear hat he intends to get revenge on Warrington, as well, from a loss earlier in his career from 2017.

And, the Spaniard Martinez boldly declared his intentions at the final press conference Thursday afternoon,

That confidence comes from his dramatic knockout of Galahad last November. As we wrote, Martinez rallied after being dominated in the early rounds by Galahad, who even cut him over the right eye, but it all changed at the end of round five. That’s, when Martinez dropped Galahad with a hard right at the end of the round. Galahad beat the count, but was clearly hurt.

Then, after the 60 seconds in between rounds elapsed, Martinez landed another thunderous straight right just seconds into the sixth that dropped Galahad flat on his back unconscious. The referee waved the contest off.

Martinez was previously the IBF 122 lb. world champ with two title defenses in 2013-14.

As for Warrington, he’s desperately trying to get back to world title status. This after having been kayoed in stunning fashion himself by Mexican Maurico Lara in February 2021. The two rematched in December but the fight was ruled a no-contest after the second round due to a clash of heads cutting Lara badly over his left eye.

As it relates to Saturday and in “the triangle” with Galahad, Warrington beat his countryman for this same IBF Featherweight title on a controversial split decision in June 2019.

Now, he and Martinez will settle things in their rematch and the winner likely will meet Galahad sometime down the road soon.