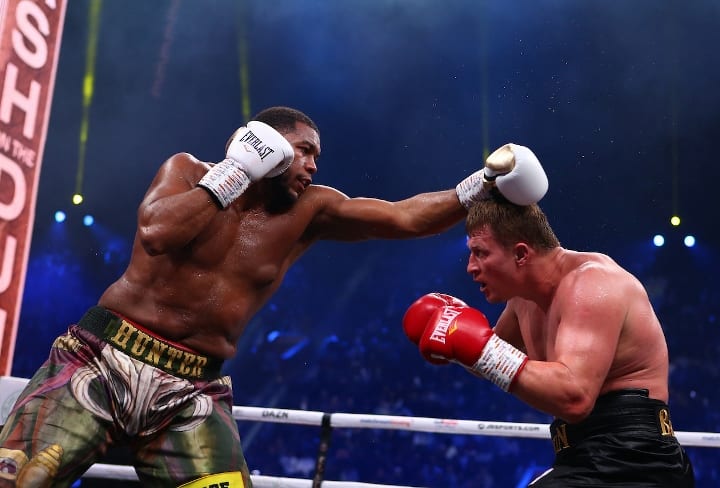 The good news now is we wait and see when and where it will take place.

Hunter (19-1-1, 13 KOs) took to social media this morning and let everyone know that his team is waiting on those exact when and where’s from Matchroom Boxing promoter Eddie Hearn.

“Eddie (Hearn) offered money, My team and I made the Eliminator happen,” Hunter said on Twitter about the Title Eliminator. When asked if the fight was set in stone on social, Hunter stated. “Agreement is there, working on location and date.”

Eddie offered money, My team and I made the Eliminator happen.

So we got this matchup as the #2 ranked challenger Charles Martin, who was supposed to face Hunter, had to pull out of the fight due to injury. Martin himself earned that spot by knocking out Gerald Washington last February. Martin stepping out gave way for Hrgovic (12-0, 10 KOs) to challenge. Oleksandr Usyk is at #3 but is waiting on a chance to challenge for the WBO heavyweight title whenever that chance arises.

For Hunter, Hrgovic is in the way of a challenge for the title Joshua has, something he’s been chasing since 2019 when Joshua was looking for replacements for his fight against Jarrell Miller.

“Hrgovic imposes a little bit of a challenge, but I’m going to be putting the heat on him. I’m more of a challenge for him than he is for me. He hasn’t fought anyone of my caliber, and that’s a fact,” Hunter said about facing Hrgovic last week to Boxingscene. “They puffed him up. It’s still too early for him. He would’ve been better off fighting Martin Bakole, someone I’d already beat, but he wanted me. There’s no pressure on me. So be careful what you wish for. They’re going to get all that they can handle. He’s in my way now. Whoever wins this fight could have their lives changed forever.”

This fight is all but a done deal. We now wait for the details next.