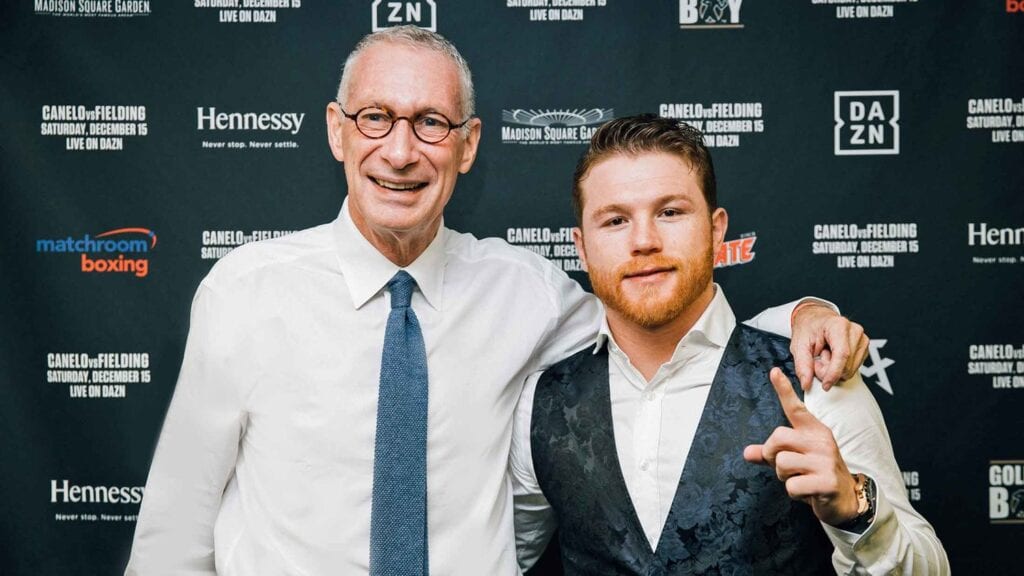 On Wednesday, the DAZN streaming service made official what had been rumored for weeks: they’ve made a switch at the top, removing John Skipper as chairman.

DAZN will now be led by Kevin Mayer, who comes to the streaming service from the Walt Disney Company. Mayer has an extensive background, including helping Disney launch and run their ESPN+, Hulu, Disney+ and other direct-to-consumer properties,

DAZN Group appoints Kevin Mayer as Chairman of the Board of Directors.

John Skipper is stepping down to focus on his newly launched content company Meadowlark Media, remaining on the DAZN Group Board of Directors serving as a strategic adviser. https://t.co/sJATpNGMQ0 pic.twitter.com/0PJYNNzEJn

Skipper, the former head of programming for ESPN, joined DAZN in 2018. And, he immediately made a splash in the boxing world with the massive, 11-fight $365 million deal with future hall-of-famer Canelo Alvarez (photo top) and Oscar De La Hoya’s Golden Boy Promotions.

However, it became apparent a little more than a year into that deal, what a massive overpaying (roughly $35 million per fight) blunder it was. So much so, that DAZN, Canelo and Golden Boy Promotions couldn’t ever get together on prominent fighters and fights to be his opponent.

He fought only three times in two years under the deal. And Skipper himself tried to intervene last March to meet directly with Canelo and have him fight England’s Billy Joe Saunders. However, the Covid 19 pandemic began and the sport went into shutdown with everything else, scuttling those plans.

The end result of the private bickering, in particular between Canelo and De La Hoya, kept him out of the ring even after Covid 19 restrictions loosened. Alvarez didn’t fight until December of last year, and that was only after Alvarez sought legal counsel and sued both Golden Boy and DAZN last September to have his contracts voided.

While Canelo’s displeasure was mainly with De La Hoya, it certainly was a massive financial hit for the streaming service that he was not consistently fighting for and drawing in new subscribers for them. Canelo eventually pressured De La Hoya to release him from his deal and make him a free agent.

For his most recent two fights, Alvarez has been doing his own deals with Eddie Hearn of Matchroom Boxing and with DAZN as the streaming partner, secondarily. This model has been much more affordable for Matchroom and DAZN. And, it was more effective in getting him in the ring, quickly.

And then, just this last week Canelo won his latest title defense at 168 lb. with a fourth round TKO over Avni Yildirim, also gathering thousands of monthly subscribers late in February for DAZN.

Hearn and Matchroom also helped bolster DAZN by agreeing for them to be Matchroom’s primary streaming partner now for most of their USA broadcast fights in the UK replacing Sky Sports.

And, both Canelo recent title fight broadcasts were streamed for the first time in Britain on DAZN’s global outlets.

DAZN had announced massive expansion plans, a year ago in March, only to have that scuttled by the Covid-19 beginnings of the pandemic and the shutdown of all of sports.

As we repeatedly wrote last year, DAZN experienced tremendous financial turbulences, laying off most of their U.S. staff and incurring huge debt with tens of thousands of subscribers canceling and abandoning their service for lack of sports programming.

However, backed by billionaire Len Blavatnick, they have forged ahead and have now begun to put boxing broadcasts back on as their most prominent U.S. programming last Fall and through the Winter.

As for Mayer, he obviously has experience in sports and with boxing specifically, through ESPN’s association with Top Rank Boxing and then, streaming their flights on ESPN+, etc.

Mayer said in the statement on Wednesday,

“As Chairman, I’m looking forward to partnering with the management team and my fellow directors to help DAZN build on its impressive track record of success in developing a truly global sports platform,” said Mayer. “Since I began working with Access Industries last year, I’ve been impressed with DAZN’s ambitions and ability to quickly grow from a new entrant to an important player in key markets throughout the world. I look forward to guiding DAZN’s strategic development into its next chapter.”

As for Skipper he will remain as a “consultant” and on the DAZN board of directors, but will no longer have any programming authority. He is instead being given the opportunity to try to grow his own new company “Meadowlark Media,” which is going to attempt to compete in the marketplace with sports personalities and their TV/audio content.