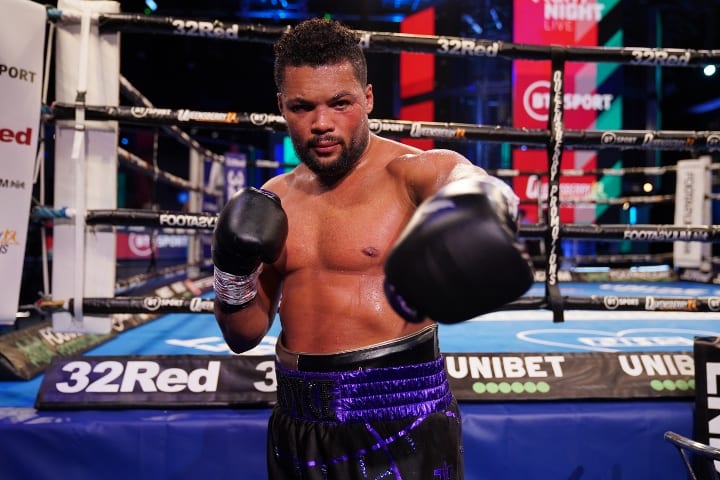 While the waiting continues to see if Unified Heavyweight Champ, Anthony Johsua and WBC World title holder, Tyson Fury, will meet later in 2021, two unbeaten contenders appear to be headed for each other, as well. WBO #1 ranked Oleksandr Usyk and unbeaten British contender Joe Joyce both want Joshua for one of his belts, but will most probably fight each other first.

Joyce’s promoter, Frank Warren of Queensberry Promotions, spoke out on IFL-TV in an interview posted Monday about the possible Usyk-Joyce matchup and where it stands with the World Boxing Organization and their top contender status, etc.

“The WBO have said they’d like to do that fight as an eliminator (for Joshua). We (Joyce’s side) have no objections to that and I don’t think Usyk has. There’s been some preliminary talks and we’ll see where we go from there.

It’s a good fight and whoever wins it, and I think…based off his last performance is looking really good and he comes through it, it puts the winner in a tremendous position.”

Joyce’s last performance that Warren is referencing was the most impressive win of career, a 10th round TKO of fellow unbeaten contender Daniel Dubois in London back in December. Joyce pounded Dubois with hard lefts to his right eye causing it to swell shut by late in the fight and earn the win.

Dubois had been the WBO’s number two ranked contender just behind Usyk, when he suffered his first pro loss. And Joyce believes he should replace him in line for Usyk, etc.

The 35 year old Joyce is now 12-0 as a pro, after having been an MMA fighter for several years before devoting things to boxing full time.

For his part, the Ukranian Usyk, the former Undisputed World Cruiserweight Champ, just won his second Heavyweight bout in November. That’s when he decisioned veteran Dereck Chisora over 12 rounds. The WBO followed their tradition of ranking him #1, when he moved up a division after having been a world champ in their lower weight class.

Usyk has been the WBO #1 for over nine months now, and the belief is that the WBO will order Joshua to fight him or vacate one of his three recognized world championships.

At the minimum, Usyk-Joyce would be a WBO eliminator fight and possibly, ultimately, for the overall title, if Joshua vacates to fight Fury instead.

Now, we wait to see if the two sides and come together for what would be an intriguing battle of unbeaten contenders both waiting for their biggest fight/payday as pros, if they win.