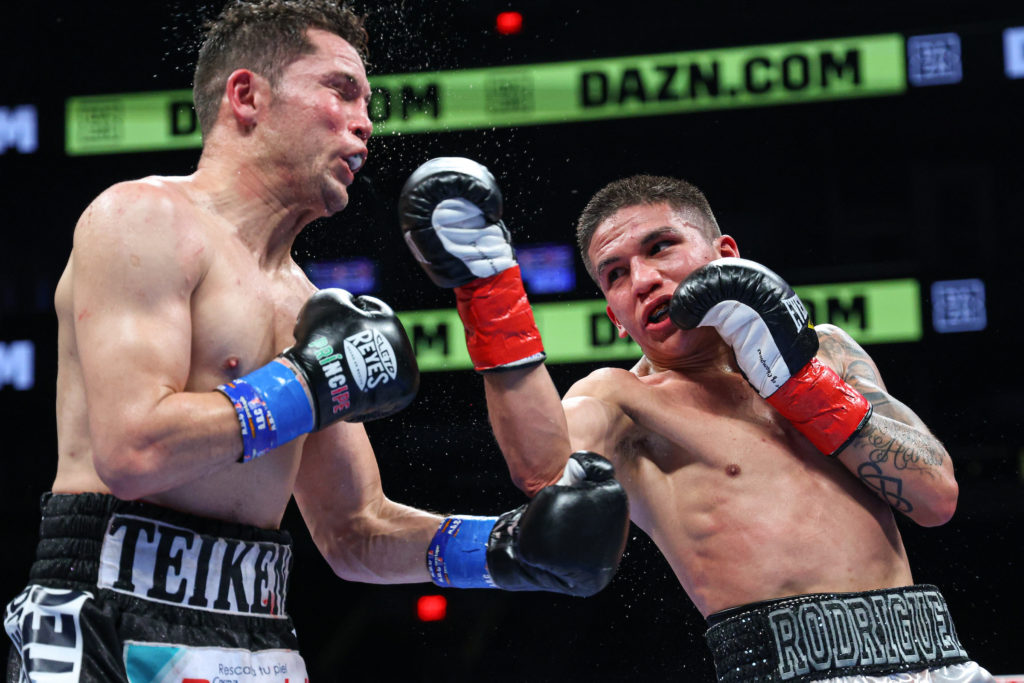 Rodriguez-Sor Rungvisai will be one of four world title bouts on a June 25 card at Tech Port Arena in San Antonio, Rodriguez’s hometown.

…then we head back to San Antonio’s @TechPortCenter for an absolute banger – a World Championship quadruple-header led by a Super-Flyweight sizzler in @210bam vs @srisaket_ssr! 🔥#RodriguezRungvisai pic.twitter.com/Tik5ZdWFIK

The three other title bouts on the card:

Undisputed women’s welterweight champion Jessica McCaskill will defend against an opponent to be determined.

The other card will take place on June 10 at Arena Coliseo in Mexico City as Matchroom and DAZN continue their series of shows in Mexico as part of a deal with Canelo Promotions. In the main event, WBA junior flyweight titlist Hiroto Kyoguchi will face “regular” titleholder Esteban Bermudez in another overdue bout that is part of the WBA’s title reduction plan.

“Kyoguchi-Bermudez is a great fight. Hiroto is hunting down unifications at 108 pounds, but he is going to have his hands full with Esteban, who has proved that he has devastating power,” Matchroom Boxing promoter Eddie Hearn said. “As for June 25 in San Antonio — what can we say? It’s a quadruple-header of world title action, with four bouts that could headline any card. I’m thrilled to see Jesse get the chance to headline at home as a world champion, and what a foe to face in the Thai legend Rungvisai.”

Now, Rodriguez, boxing’s youngest active titleholder, will face Cuadras’ rival Sor Rungvisai (50-5-1, 43 KOs), 35, a southpaw from Thailand, who was due to face Cuadras in a rematch for the vacant title but he became ill, dropped out and was replaced by Rodriguez, who moved up in weight, on short notice.

“Fighting a guy like Rungvisai is going to bring me to a whole new level,” Rodriguez said. “He’s a great fighter but this is my time now. You have to take risks in this sport. That’s what special fighters do. They said it was a risk me challenging for a world title fight on short notice and now they say it’s a risk taking on a fighter like Rungvisai, but this is what I want. These are the types of fights you need so you can be remembered by the fans long after your career is done.

“I’ve always said that me and my brother (WBA secondary junior bantamweight titlist Joshua Franco) are going to bring the big fights back to San Antonio and this is just the start of it. We are so proud to be from this city and we get that love back from the people there so this will be a special night.”

Robert Garcia, Rodriguez’s trainer, is all in on his fighter taking on such a well-respected foe.

“Jesse might be the youngest current world champion, but this is a fight where he can prove he already belongs with the very best in boxing,” Garcia said. “We have a lot of respect for Rungvisai, we know what he is capable of, and he is a great, great fighter but I also know what Jesse is capable. I have so much belief in him, and I know he is ready for this.”

Sor Rungvisai, who has two wins over Roman “Chocolatito” Gonzalez in world title fights, is anxious for another shot at the 115-pound belt.

Martinez (18-2, 14 KOs), 27, of Mexico, and Arroyo (21-4, 16 KOs), 36, of Puerto Rico, fought in November 2021. Both fighters got knocked down in the first round and Arroyo again in the second, but the shootout ended as a third-round no contest because Arroyo was unable to continue after being cut by an accidental head butt.

Arroyo has not fought since. Martinez has fought once, moving up to junior bantamweight on short notice and getting outclassed in a decision loss to Gonzalez on March 5.

Akhmadaliev (10-0, 7 KOs), 27, a southpaw from Uzbekistan, will make his third defense against Rios (33-3, 16 KOs), 32, of Santa Ana, California, in a fight originally scheduled for this past November but postponed when Rios came down with Covid-19. Akhmadaliev instead handily outpointed late replacement Jose Velasquez.

Rios will be getting his second title shot. He lost a decision to then-WBC titleholder Rey Vargas in 2017.

McCaskill (11-2, 4 KOs), 37, of Chicago, will make her third defense of the undisputed title she took from longtime champion Cecilia Braekhus in their first fight in August 2020.