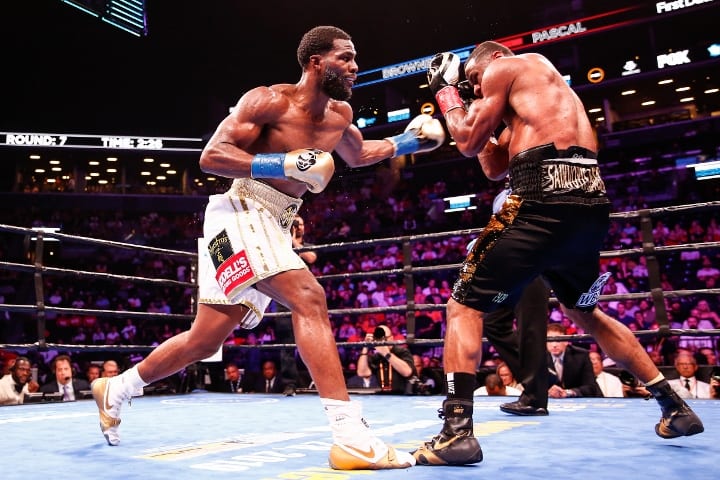 Unified champion Artur Beterbiev won’t have too far to go if he needs an opponent, and you can add former title challenger Marcus Browne to that list.

Browne’s longtime trainer, Gary Stark Sr. speaking with Boxingscene, stated that Browne would love the opportunity to take on Betrebiev.

“Our advisers are talking about Beterbiev right now, and we’re ranked number one for him, anyway,” Stark told, speaking to Boxingscene.com. “We want that fight next, so we’re just waiting for what [manager] Al [Haymon] comes up with.”

Where did Browne come from in this picture? Well, the original game plan was for Beterbiev to take on recently crowned WBO champion Joe Smith Jr., but yesterday came word that Daniel Jacobs would move up in weight to challenge Smith at light heavyweight. That move seems to be motivated by the option of making more in that contest as Matchroom promoter Eddie Hearn in yesterday’s report, produced a “great offer” for the fight.

That leaves Beterbiev without an opponent listed currently, and this Stark hopes it gets Browne a title shot.

“Yeah, yeah, he is a monster,” Stark stated. “But it’s for the world title, so we will have to train super hard and get the best version of Marcus to come out.”

Browne (24-1, 16 KOs) is coming off a 12-round victory over Denis Grachev on April 20 at the Shrine Exposition Center in Los Angeles. Browne has been trying to grab another chance at a title since the Jean Pascal loss in 2019 and was recently involved in a WBC title elimination bout that was scrapped when Gilberto Ramirez withdrew from it back in February.

“I hope they realize that we’re number one for that belt and that they go by the sanctioning body rules,” said Stark. “I don’t think Beterbiev has faced a number one ranked fighter in a couple of years, so he needs to step up and fight the number one, so that would be Marcus.”

If Browne is ready to go for Beterbiev, then sign me up. If anything, it will be a more competitive match than his last contest, where he battered around IBF mandatory challenger Adam Denies in March.

Smith Jr., Browne, and WBA Champion Dimitri Bivol are the names next for Beterbiev, and I’m game for any of those matchups to go down.